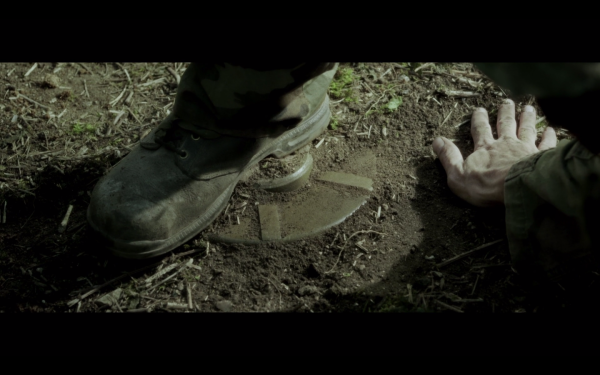 Canadian army Maj. Gen. Nicolas Matern introduced the event, which the Canadian Embassy has hosted since the third year of the festival. He lauded the co-founders for promoting awareness of military heritage, military life, and problem confronting soldiers and their families.

The short films presented during the evening ran the gamut from experimental documentaries to fast-paced action adventure. Some focused on a particular moment in time, while others told stories spanning weeks and months within 10 minutes or less.

Four films, “Last Call,” “Relentless,” “Sister in Arms,” and “The Hole,” focused on the intense experience that can happen in just a few short moments on the battlefield. In “Last Call,” directed by Camille Delamarre, a soldier steps on a landmine while saving another soldier. As per usual in film, although not per usual in most situations involving mines, the device doesn't go off right away, thus giving him the opportunity to make one final call to his daughter.

The concept is developed with some success through the script and the actors, drawing the viewer into the moment; however, the opening scene features soldiers in woodland green battle dress uniforms, fighting through an unidentified landscape, pursued by an attack helicopter in the air, yet passing an army Jeep. While it is conceivable that the soldier could have been fighting in the Balkans in that uniform, using that equipment (circa the mid-1990s), the cell phone he pulls out would not have been invented until more than a decade later. Although this film, a French project filmed in English, has done well in Europe, the discontinuity of these elements serves as a distraction that pulls the viewer straight out of the piece. Given the short run time of the film, the American military viewer may find this an ultimately unsatisfying film.

“The Hole,” a Canadian film directed by Steven Stiller, has the advantage of being set in World War II and thus escaping immediate questions of authenticity. In this nine-minute short film, a Canadian soldier dives for cover in a large hole in the ground in order to escape a German sniper. He finds the hole, which appears to have been made by some sort of munitions, occupied by the sniper's previous victim. With no ammunition left except one grenade, the soldier must decide to make the sacrifice to take out the sniper and thus preserve the lives of any fellow troops behind him.

Donovan Cerminara plays the unnamed Canadian soldier with a hint of bravado, some humor, and a few fleeting moments of introspection as if, were he to think about it too much, he might lose his nerve to do the right thing. He pushes himself along from realization to decision, taking the audience with him until the final moment. Wisely, the camera refrains from any distracting shots, simply allowing Cerminara to drive the action, until the very end, where his decision is silhouetted against the screen.

Another selection, Jane Horsakul's animated short “The Wound,” is a Thai film that also portrays a story of the American military. Horsakul packs an intense punch in three short minutes, as the viewer watches a young boy say goodbye to his Air Force father. He busies himself while his dad is away, playing games and waiting, as the pages on the calendar fall away. Finally, as the calendar ends with a bright red poppy on Nov. 11, his father returns, but not as he was when he left.

Kieran Dick's experimental documentary film, “Détente,” also utilizes animation effects to illustrate connections across the battle lines. The film builds a narrative based on more than 50 letters from American and German soldiers. The 15-minute piece plays like a jazz composition, with the spoken narrative as the foundation while the music and imagery riffs over the vocal line. The demand to focus on the words instead of the imagery forces the viewer to pay close attention to the coincidences and connections that arise in the spaces between the letters from soldiers on opposite sides of the war.

Themes of the enemy as human — and even to a point sympathetic — echo in Sarah R. Lotfi's award-winning narrative short “Menschen.” The film is based on the events of the Nazi T4 program, in which children and adults with disabilities were put to death. In this film, an Austrian officer takes care of a boy with Down syndrome when his mother is killed in a skirmish between the German soldiers and anti-Nazi partisans. He confesses to one of his men that this is his “penance” for his disabled sister who was killed after being taken from an institution by the Nazis.

“We were looking for a story in that time period from a perspective that hasn't been done before,” said Lofti, during the Q-&-A session after the viewing. Later, she explained, “We wanted to play with expectations and make people think.”

The consequent focus on the story of Hauptmann Himmelbauer subverts the expectations of an audience that might not know what to think about a character wearing a swastika on his uniform, whom the film does not judge, let alone condemn.

The final film of the night, British narrative short “Civvy Street,” was originally conceived as a theatrical monologue, according to lead actor and writer Peter Carruthers. The film, commissioned by the National Health Service, maintains the quality of a monologue, with Carruthers spending much of his onscreen time speaking directly to the audience. The film injected a much-needed note of humor into the evening, even as it treated its material — the story of a veteran attempting to make the transition to civilian life — with seriousness and respect.

Carruthers, a veteran of the Royal Air Force, later performed his monologue for soldiers at the Walter Reed National Military Medical Center, much as he had performed for medical personnel and veterans in his native United Kingdom.