When Joe Cardona came over to the collected media after Monday's practice outside of Gillette Stadium, he walked over in … Continued 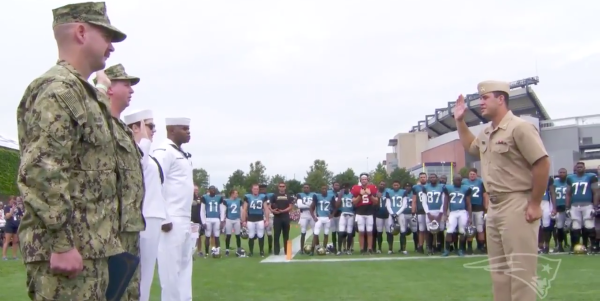 When Joe Cardona came over to the collected media after Monday's practice outside of Gillette Stadium, he walked over in full uniform. This was not his Patriots uniform, however. This was what he wears to his other job.

Cardona, the Patriots' long snapper and an ensign in the U.S. Navy, performed a reenlistment ceremony for two fellow naval members outside of the Patriots' practice.

RELATED: This Player Needed Permission From His CO To Play In The Super Bowl >>

“They're signing up for a few more years of service, and when they asked me to perform the re-enlistment, I jumped at the opportunity,” Cardona said. “Along with that, when I mentioned it to the organization that they have someone interested in doing a reenlistment, these are the dates that it falls under — it's something that they jumped on board and said, 'We are going to make it a special opportunity for the member.' And I think it made it a special opportunity for everyone out here today.”

Earlier today, #Patriots long snapper and US Navy Ensign Joe Cardona had the honor of swearing in two members of the Navy for reenlistment: pic.twitter.com/n0XbxO6j9y

After practicing with the special teams unit all day, Cardona walked off the field to go over the words to the ceremony and change into his uniform. To Cardona, the uniform change was a fun part of the day.

“I just felt like all I needed was a phone booth to get it done fast,” Cardona said.

When the ceremony began, it was more than just Cardona who came over the take part in the ceremony. According to WBZ's Dan Roche, 80 to 100 military members from all five branches were at training camp for a military appreciation day Monday. All of the players from both the Patriots and Jaguars organizations walked over as well to keep an eye on the moment.

“To have the backing of the organization and the players coming on their own as well as the players for Jacksonville to come out and be a part of the reenlistment ceremony, it really meant a lot to me,” Cardona said. “(The two naval members) are the ones that are signing up for more service and they're the ones who really deserve that kind of recognition on a day like this where they're raising their right hand and promising to serve and defend the constitution.”

It's not Cardona's first time taking part in a reenlistment ceremony. He performed two ceremonies earlier this year at the Patriots' Hall of Fame. Monday was a special opportunity, however, because it got the rest of the team involved.

As for what's next for Cardona, obviously there will be more competing and more long snapping in his near future. He is not about to look past training camp though. He's a Patriot, after all.

“You know, we're just focused on one thing at a time,” Cardona said with a smile.