“Are you sitting down?” asked the voice on the other end of the line. It was twilight on a week... 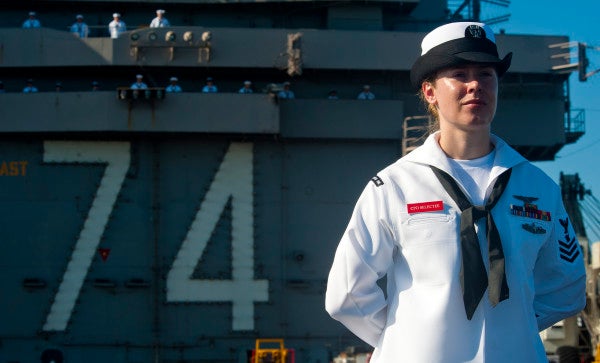 “Are you sitting down?” asked the voice on the other end of the line. It was twilight on a week night. I was waiting in line at a new hipster restaurant, a Joyce Johnson novel in the other hand. I had been looking forward to enjoying a pleasant solo evening.

“I’m afraid I have bad news,” based on his words and tone, I thought he was about to tell me someone close to me was dead, “You’re surging.”

I couldn’t breathe. Where I was going was irrelevant. I’d been home less than a month. You could have told me I was going back to the relatively first-world experience of my last deployment and I would have had the same reaction.

“How did this happen? What?” I could barely form words. He was apologizing, but there was no answer to be had. I hurried the few blocks home to panic in private.

“Involuntary surge” are two words that a service member who has just returned from deployment never wants to hear — not even those of us who have permanently itchy feet. I have deployed on two hours notice before, but that was voluntary, and I had been home for a while; this time around, I was just starting to recall the rhythm of daily life at home. I had just started to remember where I kept most of my kitchen appliances.

Surging typically refers to when a service member returns from deployment, and then is sent right back out again because, technically, he or she is still ready to deploy. Aircraft carriers have been some of the worst sufferers of this fate. In early 2012, the USS John C. Stennis returned from a seven-month deployment to the Middle East, only leave again less than four months later. A friend joked, “Well, the second time, it was like reading all the same emails in reverse.”

I sat on my couch staring at the walls. All I could think was, “I can't do this. I'm the wrong person for this. I'm not ready. I can't do this, my people deserve a better leader.” I had never panicked about anything in the military — and like everyone, I have had my fair share of feverish situations.

Picking up and leaving should seem simple for me: I’m not married. I live alone. I don’t even have a dog anymore.

My fear was not about our mission. It was about the fact that when you deploy in a short-fused circumstance, you have to shut yourself off, kill all emotion and the parts of yourself that make you fundamentally you. You put all your relationships on hold. You forget to feel. When you turn yourself back on, everything is far worse than it was before because it has been festering on a shelf in the back of your mind. I have already gone through this; recently, in fact.

I spoke to some trusted military friends. I feared being called weak. The reaction was the opposite. Instead, it was an understanding pause and empathetic, “I know exactly how you feel.” I was relieved that it wasn’t just me.

Of course, I knew that if I was needed, I was going. I joined to serve and that means never walking away, especially when your buddies are still there.

As I waited to find out when and where from I was leaving again, a friend reminded me that the trepidation I felt was like that felt standing at a starting block, hearing beeps counting down before starting a race: Your heart races, you forget to breathe, you forget where your arms and legs are. But the second the gun or whistle sounds, you feel every muscle in your body, propelling yourself forward with all your strength.

In the end, once I had reluctantly accepted that I might be leaving again, I found out I was no longer needed. Untethered, I could breathe easily again. Over beers of relief, a fellow officer pointed out that I was back to being in the infinity pool of my life: no deployment on the horizon. Looking at it was a beautiful, unimpeded vista of the water and horizon, with a cliff’s edge to fall off somewhere when the currently unforeseen call to deploy comes once again.