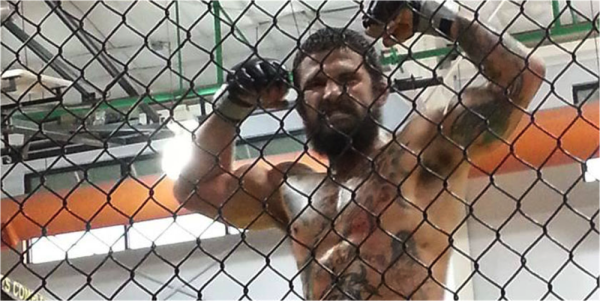 Governale is a warrior, by any conventional definition of the term. A former infantryman and scout sniper with 3rd Marine Battalion, 1st Marine Regiment, Governale deployed twice to Iraq — once in 2005 to Haditha, and again in 2007 as part of the 13th Marine Expeditionary Unit’s battalion landing team.

Task & Purpose caught up with Governale via telephone just days before his sixth professional MMA bout, Friday, April 10. Governale was set to fight Jay Bogan in Bellator 136 at the Bren Events Center in Irvine, California.

Governale was the underdog in the fight. Going in, he had a 3-2 record as a professional, having lost his last fight by technical knockout. His opponent, Bogan, was on a four-fight win streak.

“He’s won his last four fights by submission in the first round,” Governale said of Bogan before the fight. “The guy’s real tough, I’m not taking anything away from him; but I’m tough.”

Governale defeated Bogan by submission in the second round of Friday night’s fight.

Governale’s connection to mixed martial arts began eight years ago, in 2007, during deployment to Iraq with the 13th Marine Expeditionary Unit, where he bonded with a combat experienced noncommissioned officer named Cpl. Sean Stokes.

Governale describes himself as “a little crazy … just wild,” and so Stokes told him that he’d be a perfect fit at his gym. Stokes made Governale promise to check out his mixed martial arts gym when they got back from deployment.

“I would just talk to him a bit,” Governale said, “almost every day.”

Stokes was killed in action on that deployment, his third deployment to Iraq, including a 2004 deployment to Fallujah for which he was posthumously awarded the Silver Star.

Governale kept his promise to Stokes and started training for mixed martial arts on ship on the way home from Iraq.

“As Marines, we’re firm believers in keeping our word. Since I told him I’d do it, I started training on ship on the way home.”

“The coach, who I now refer to as Coach Dan, gave me a talk on how I reminded him of one of his fighters that was killed in the war,” Governale writes. “He started describing a handsome badass motherfucker, and I blurted out ‘Sean Stokes.’”

Things have come full-circle for Governale. He now boasts a 4-2 record on the heels of his victory against Bogan. For him, however, his professional MMA career has offered him a sense of purpose after his combat-intense service in the Marine Corps.

“It’s my life. It’s definitely changed me,” Governale said of mixed martial arts. “I used to think I was the toughest guy on the planet, until I got beat up a couple times.”

But now it seems Governale is beating people up more than he is getting beat up himself. While that may not make him the toughest guy on the planet, it does make him someone who has found a renewed sense of purpose. He said he loves the Marine Corps, loves being a warrior, and now he gets the chance to do it every day.

“I feel like MMA is the perfect transition for people to continue the warrior lifestyle,” Governale said. “It’s soothing I think, even if you get beat up, because you continue to strive as a warrior.”