Rebekah Kind knew something was different when she tried to leave the classroom to refill her canteen. Kind, then a... 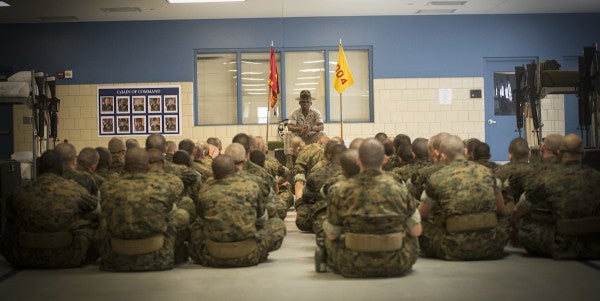 Rebekah Kind knew something was different when she tried to leave the classroom to refill her canteen.

Kind, then a 28-year-old trainee from Zion, Ill., at Marine Corps Recruit Depot Parris Island in summer 2016, was usually allowed to get water during lectures such as this one — staying hydrated was encouraged.

Not this time, though: She was ordered to sit down, and moments later a male Marine with an official-looking folder entered the room, which halted the history lesson on the Korean War.

Her platoon, 4037, and sister unit 4036 — about 120 recruits from Company O, 4th Recruit Training Battalion — sat rigid in their desks, their backs straight, not touching the chair, their feet on the floor at 45-degree angles. Canteens rested on their desks, she remembers, along with some paper for note-taking. They wore camouflage blouses over green T-shirts.

Their drill instructors had earlier left the classroom, leaving them with an instructor and, now, the male Marine, who pulled a piece of paper from the folder and began to read.

As he did, she cried and heard others “quietly sobbing.”

Four American cities had been attacked, likely by the Islamic State, Kind remembers the Marine saying. One of them was Chicago, just 50 or so miles south of her hometown.

“Because of my age, I remember 9/11 quite well,” Kind recently told The Island Packet and The Beaufort Gazette. “So it’s completely plausible ISIS could have attacked our country, so I didn’t even question when they told us that.”

What Kind says happened next — what she calls “a trap” and now considers hazing — shattered her trust in the people training her.

It was a surprise war-deployment scenario, one with a cruel twist, in Kind’s view. Another former recruit told the newspapers that he experienced it, too, and it’s an activity known to Parris Island officials.

Yet the activity — at least its Korean War manifestation — has, according to Parris Island spokesman Capt. Greg Carroll, never been part of the recruit training curriculum. Nor is it currently used.

But it’s important to consider its existence at a place like Parris Island, where the nature of military training creates a gray area in which hazing might be more difficult to identify — especially in the moment — and thus report.

At a time when the depot is being scrutinized for its treatment of recruits — following Raheel Siddiqui’s March 2016 death and recently obtained depot-wide hazing investigations — Kind’s and others’ experiences raise questions about what is acceptable, and what might cross the line.

The scenario Kind experienced has its roots in Georgia.

It was inspired by a Savannah Marine Corps Reserve infantry battalion whose members deployed “on extremely short notice” — many without finishing recruit training — to Korea in 1950, Carroll wrote in an email to The Island Packet and The Beaufort Gazette.

“In the past,” Carroll wrote, “a scenario was presented to recruits as part of an attention gainer prior to the history period of instruction encompassing the Korean War.”

Currently, recruits are instructed about the conflict in History Class 4, he said, which occurs in the first phase of training.

Maj. Steven Allshouse, now director of Parris Island’s Drill Instructor School, remembers from his time with 2nd Recruit Training Battalion a scenario following a lesson on the Korean War. Recruits were told there had been an attack and that they would all — regardless of the military occupation they had signed up for — deploy as frontline infantrymen. Because of that, they were given a choice.

“So, heads down,” Allshouse said, describing the activity. “Those of you that don’t want to do it, that don’t want to be infantry, put your hand up and identify. And then we’re just going to move you out so that we can expedite this process. So it’s kind of like an anonymous thing.”

But they were told to “understand that we are a war-fighting organization,” Allshouse said, “and the seriousness of your commitment is, technically, we didn’t even have to ask your permission.”

Sitting in the classroom, Kind listened to the Marine’s briefing on the Islamic State attack.

She and her peers were told their training would be accelerated and they’d be deployed, she said.

They would fight on the frontlines in the infantry, regardless of what military job they’d signed up to do.

Casualties would be high.

She remembers being told she wouldn’t be able to call or write home to tell her family what was happening.

The recruits were given a choice, she said: Remain in your seats and be deployed, or stand up so you won’t be.

They were given three minutes to think about it, she said.

They were told to put their heads on the their desks and close their eyes.

“When I was told to close my eyes,” Kind said, “I thought the purpose was to protect anyone who stood up so they would not be singled out for ridicule.”

Thomas “Jake” Weaver, 21, of Interlachen, Fla., a former member of 3rd Recruit Training Battalion who graduated from Parris Island in July 2015, said he and his platoon weren’t told to close their eyes.

But they were given the choice not to fight.

Weaver, who said he was hazed during his time on Parris Island, said he can’t remember the subject of the lecture that was interrupted when a female Marine with a “certified-looking document” delivered an “urgent message” to the recruits.

North Korea had shot down an American jet, Weaver remembers being told. War had been declared.

Germano, who was on Parris Island for a year before being relieved of command in June 2015, said the activity “has been going on for decades.”

And she defends it as a teachable moment, but only if it doesn’t single out and ridicule recruits.

“The idea behind that class is to reiterate that the emergency in Korea happened with very little warning,” she said, later adding that the goal was for recruits to ask themselves if they were serious about serving.

Germano, whose time predated Kind’s at the depot, could not confirm the then-recruit’s experience. But when asked if it could be considered hazing, Germano said, “Oh yes, absolutely.”

As Kind sat in the classroom, she thought about not being able to contact her family, of possibly dying without them knowing what happened to her.

Weaver did, too, for the same reason.

Both recruits regretted doing so.

When Kind stood, she opened her eyes and was surprised to see a handful of other recruits standing. She and the others were told to sit back down. Then, everyone was told to open their eyes. And then, those that had opted not to fight were asked to again stand up.

“At that point, I kind of realized that it had been a trap,” Kind said.

Her drill instructors rushed into the classroom, having somehow timed their entrance perfectly. Kind and others standing were called “cowards” and “traitors” and told to remove their camouflage blouses — they were a disgrace to the uniform, they were told.

They were hurried back to their barracks and punished with calisthenics — “incentive training,” it’s called.

Rebekah Kind, center, is pictured with her sisters after the swearing-in ceremony at a Military Entrance Processing Station taken the day before she arrived at Marine Corps Recruit Depot Parris Island for recruit training. Her sisters are Rachel Schultz, left, and Ruth Schultz, right.

It was a crushing moment for Kind, who’d just come off a “trial period” of training, she said. She’d been marked down for underperforming, but her Recruit Evaluation Cards — which she shared with The Island Packet and The Beaufort Gazette, along with dozens of other documents from her time on Parris Island — indicated steady improvement.

She said she was later dropped from training because of medical and psychological reasons and was discharged from the Corps.

Weaver, who said he was also punished with exercises for opting not to fight, said he was “cussed up and down.”

“The funny thing, now that I’m thinking about it,” Weaver said, “a couple of my friends (who are Marines) told me this would happen, but I had completely forgotten.”

A recruit drags a simulated casualty on a combat training course during the Crucible Jan. 5, 2017, on Parris Island, South Carolina.U.S. Marine Corps photo

Weaver, too, thinks he was hazed.

He graduated recruit training but said the treatment he endured on Parris Island caused him to have a breakdown. He was discharged “other-than-honorable” — a classification he’s still appealing.

Hazing, whether physical or psychological, is defined by the Corps’ policy as a “military member” causing another service member to suffer “any activity which is cruel, abusive, humiliating, oppressive, demeaning or harmful.”

Allshouse and Germano say that every recruit training activity has to be done with the intent of accomplishing a specific purpose.

The depot’s Recruit Training Order says activities “must be designed to accomplish a legitimate training goal or illustrate a specific learning point” and “not be intended solely to create an intimidating environment.”

The purpose of the war-deployment scenario was never explained to Kind and Weaver, according to them.

Weaver said he and others were “(incentive trained) for weeks” following the mock-deployment scenario. Kind said her senior drill instructor had to later address the entire platoon and tell the recruits to stop harassing trainees like her who had stood up. All it did was create dissension, she said.

Weaver said he saw the activity “as a good way to see who’s really ready to go to war” and called it “important.”

But, he also said, “The way they twisted it in the end was not OK.”

“All academic instruction conducted aboard Parris Island is supervised by at least one member of the training company’s leadership,” Carroll wrote in an email. “Prior to beginning recruit training, recruits are instructed to treat every Marine with dignity and respect.”

And recruits are instructed to report to their chain of command if they feel they’ve been mistreated, or if they witness mistreatment, he said.

When asked when the activity was abandoned and why, Carroll told newspapers: “The primary purpose of History Class 4 is the curriculum, not the attention gainer.”

Multiple, unsuccessful attempts were made to contact Kind’s drill instructors and series commander.

“The only training it did for me was it trained me to distrust the leadership, Kind said, referring to the scenario she faced in the classroom.

“And if that’s the training they intended, then by all means, they trained me.”