At this point, I’d be tempted to call the public’s infatuation with Mike Rowe borderline fanatical were it not just... 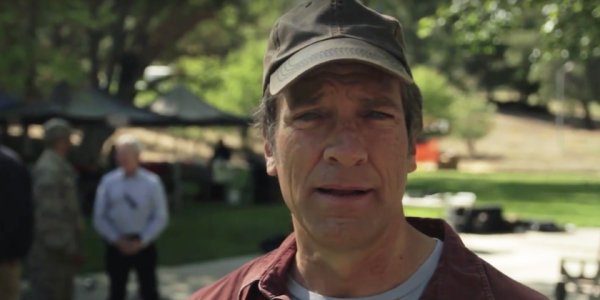 At this point, I’d be tempted to call the public’s infatuation with Mike Rowe borderline fanatical were it not just so well-deserved. The guy gets it. He’s one of the few celebrities who, during a time when many of his peers are using their fame as a platform to reinforce divisions between left and right, manages to garner respect and adoration from folks across the political spectrum. Whatever his politics may be, he’s an American first. A patriot through and through.

For example. Rowe recently received a letter from a woman named Diane Dodson, thanking the 54-year-old former “Dirty Jobs” host for writing a letter to her ailing son, Justin. Justin, who, according to Dodson, “fought in countries where most of us will never go” as a Special Forces soldier, suffers from ALS, also known as “Lou Gehrig’s Disease,” which Dodson seems to believe was “brought on” by his military service — and reasonably so. According to the ALS Association, “for unknown reasons, military veterans are approximately twice as likely to be diagnosed with the disease than the general public.”

ALS, or amyotrophic lateral sclerosis, is a neurodegenerative disease that affects nerve cells in the brain and spinal cord, causing muscles throughout the body to atrophy. It is an incredibly painful and traumatic illness, not just for the person who suffers from it, but also for the people who care for them while their body slips quickly into paralysis. The average life expectancy of a person with ALS is two to five years from time of diagnoses. Most die from respiratory failure.

In her letter, Dodson recounted how Justin had read Rowe’s letter after having just had a “horrible experience causing him great discomfort both physical and emotional.” She also explained that Justin has long considered Rowe a “totally admirable man.” Rowe’s response was characteristically gracious in both its message and tone. Not surprisingly, the exchange has gone viral since it was published on Rowe’s Facebook page on Dec. 27, but it deserves as much attention as it can get. So we’ve posted it below. Take a look.