Ask A Veteran: What Can I Tell A Young Person Who Wants To Enlist?

Welcome to Ask A Veteran, a place for civilians (or anyone!) to ask questions about the military or veterans issues. Alex... 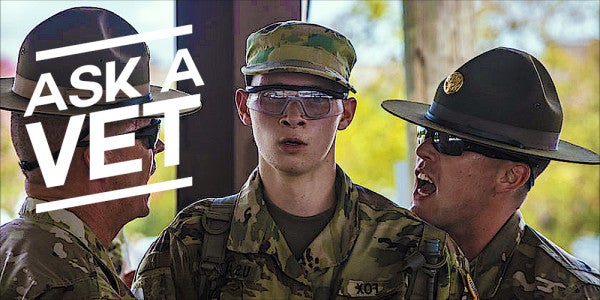 Alex asks: I teach social studies in a public high school in NYC. I did not serve. Many of my students see military service as their only chance to change their prospects for the future. They idealize the benefits the recruiters describe without, I fear, giving real thought to what comes with their signature. I’m looking for some questions to ask kids (and their parents/extended family, who are often supportive of enlistment) to get them to contextualize what they're signing up for and to get them to be thoughtful about what military service would likely mean for them.

First, allow me to applaud your dedication to your students. Anyone brave enough to face teenagers every day and still care about their future is someone who should walk tall in this forum. You live life in constant danger of being owned by those Juul-wielding savages and somehow are still invested in their betterment as people. I salute you.

Now, on to the matter hand: If my read on your question is correct, you are trying to approach this matter with sensitivity and an open mind, but the underlying vibe I get is, “How can I convince these kids not to sign up for military service?” Of course, given the lack of interest and accountability in the Forever War from our government (and, by extension, the American populace), your concern is not unfounded. You’re also right to be skeptical of recruiters; they are under enormous pressure to meet their recruitment quotas, and that pressure manifests in selling dreams that often go unfulfilled.

But consider, for a moment, the benefits of military service that your students find appealing. An enlistment bonus? It may be more money than that student has ever seen before — and possibly more than the family has ever seen before (which may explain the parental support for enlistment). Money for college? Frankly, going through college as an adult on the G.I. Bill seems to me like a better recipe for success than starting to accrue student loan debt at age 18.

I am, admittedly, a tainted source on this matter. My father, an Air Force pilot, was the first person in my family to graduate from college thanks to the military. I went to an expensive university not because my family had money, but because I had four years of my life to give to the Marines. I grew up believing that the military was a way for bright people from humble roots to gain entry into the middle class, and because I am able to look back on the benefits it gave me — tenacity, courage, confidence, character — I am unable to discourage others from the path.

Back to your students. We mustn’t forget the strongest siren song of all: The promise of adventure and world travel. This promise can deliver, or it can bite you in the ass. Or both. I often joke that the Marine Corps gave me a tour of the world’s deserts, but the specifics are more interesting than the punchline they serve. For three years, I lived a ten-minute drive from Joshua Tree National Park; the Mojave is mountainous and full of hardy plant life that erupts in color during the short spring when the hard rains release the smell of creosote. I spent the month after 9/11 in the Western Desert of Egypt — long flat stretches of brown sand punctuated by rock formations that were both easier and harder to navigate than the Mojave, depending on your map skills. In Kuwait, where we staged before the invasion of Iraq, the only feature was the horizon. Kuwait can go eat shit.

And that still only scratches the surface of what I saw and learned in four years. I lived in Kentucky and developed a taste for bourbon thanks to the Armor Officer Basic Course at Fort Knox. I’ve been to Australia with the best friends I’ll ever have; we taught locals the dice game Ship, Captain, Crew. I’ve crossed the Indian, Pacific, and Atlantic Oceans on Navy ships. I’ve flown in helicopters and driven tanks and landed on a beach in a hovercraft. I can hit a man-sized target from 500 yards with an M16 using only iron sights. What might a civilian life have offered me out of college? Safety, I suppose. But less of everything that was vibrant and meaningful, and nothing that made me who I am today.

I do not mean to whitewash the danger. It is a deadly job even in peacetime. A good friend of mine, John Wilt, a lieutenant who was my classmate both in high school and at the Marines’ Basic Officer Course, was killed in an aircraft accident when he was at flight school. One of my Marines was airlifted from Twentynine Palms to the Naval Medical Center at Balboa after he got his head partially crushed during routine maintenance of an Abrams tank; he lived after surgeons cut open his skull to relieve the swelling from his brain.

Combat is worse, of course. I have the benefit of hindsight about my experience because I didn’t get shot in the head like my buddy Brian McPhillips. I have the luxury of nostalgia because, unlike my friend Andy Stern, my life didn’t end with an IED exploding in my face. My lot in life is to go around repeating their names to people who can never know them. As my body gives way to middle age, their names are as familiar and well-worn as a rosary, but their pictures always stop me in my tracks. The youth of the dead is breathtaking, and I can barely believe that I stood shoulder to shoulder with them — that I was ever so young, and believed myself invincible.

You said you were looking for questions to ask kids that would “get them to contextualize what they're signing up for.” But I’m not sure that’s possible. How can you give young people wisdom without experience? They will be drawn to the military the way I was drawn to it — for the benefits, yes, but also to fill a hole inside them, a deep-seated craving to challenge and prove themselves. They will be drawn to service knowing, intellectually, that it is dangerous, but without really believing that the danger can touch them. Their peers will drive recklessly or do drugs or similarly dangerous things, and none of them will ever believe that harm can come to them. It is a feature of youth, not a bug.

I do not wish to discourage your noble effort, but I don't want you tilting at windmills, either. I will leave you, and your students, with the best reflection I have on my military service: It is a wonderful thing to have done, but it was often miserable to do. Or, more succinctly: It is a great thing to do with your life — if it doesn’t kill you.