Some Military Traditions Are Worth Preserving. Others Are Obsolete

The military is a strange institution. It must be on the cutting edge of innovation and change in order to … Continued 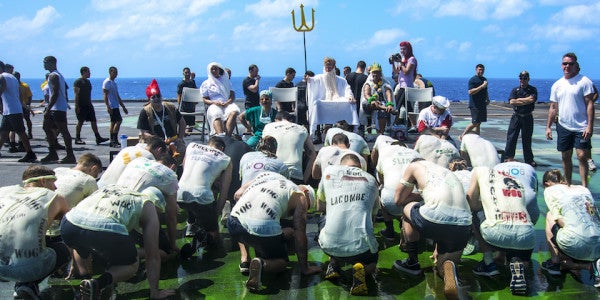 The military is a strange institution. It must be on the cutting edge of innovation and change in order to win the nation’s wars. If it falls behind, even for a moment, the costs can be immense. In some cases, it even leads social change when it serves military goals — the military was at the forefront of civil rights when it integrated blacks in 1948.

At the same time, much of the military’s strength lies in the human capital built upon tradition. The belief that one is the heir to a heroic lineage going back hundred of years is a powerful weapon in itself. For example, Marines still revel in the founding of the Corps in Philadelphia’s Tun Tavern and commemorate it annually. Marines fight for their forebears almost as much as they fight for each other.

Whenever change is on the agenda in the military, the issue of tradition comes up. Whether it’s a small change to uniform items, or a big change, like altering boot camp, the notion that the military is abandoning its legacy often looms large.

A lot of beloved traditions have come under criticism in recent times. The traditions of naval rates, aviator callsigns, Navy “crossing the line” ceremonies, the Air Force’s “mustache March,” and many others.

All of these get thrown in the same bin — both the harmless and the pathological — as if they’re all the same. Some traditions bind the military together. Others pull it apart. The difficulty lies in figuring out which are which.

Which of these are mission critical, and which are merely “the way we’ve always done it?”

Some traditions are about symbolism alone, about expressing our values in a way that binds military units together. All of the various ceremonies we do in the military, from morning colors to change of command ceremonies to celebrations like the Marine Corps birthday are not practical things. It would be far more efficient to not play music while we raise or lower the flag, or even not to raise it at all. The base duty team would save some time, and dozens of service members would save a mad dash indoors at 0759. Yet it’s tremendously important. This type of tradition has stuck around for good reasons.

But other traditions are just policies we’ve had or things that we’ve done for so long that they’ve simply become part of the military’s muscle memory. Some are good, and some are bad, but they’re still just “the way we’ve always done it.” As an example, formation runs used to be the primary method to conduct unit physical training, and in some places they still are. They’re such a famous part of military culture that if you were to watch most pop culture portrayals of the military, you’d think that all the military did was run in formation and occasionally take breaks to kill people.

Related: ‘Change For The Sake Of Change’ Seems To Be The Navy Secretary’s Motto »

Almost every service member hates formation runs. They’re too slow for fast people, too fast for slow people, and the people in the back alternate between crawling and sprinting. The formation run is slowly dying out as units realize that their limited physical training time is usually better spent doing some form of functional fitness that actually has some science behind it. Formation runs aren’t required by any order or regulation. George Washington didn’t run alongside the Continental Army, singing “Jody’s got yer Cadillac!” The way to break this type of tradition is by individuals bending it, little by little, until common sense forces it to snap when everyone realizes the newer way works better.

By far the hardest traditions to address are the ones with some type of “progressive” or “PC” criticism of them, like risque callsigns (‘Dirty’ Sanchez, anyone?), sexually revealing armor or aircraft art, or making job titles gender neutral. There’s a temptation for overzealous outsiders, especially grandstanding politicians, to point at some aspect of military life and make it seem outrageous, whether it is or not. But the military marches to the beat of a slower drum than society at large. Outsiders don’t always get that, so they attack venerable traditions and creates a backlash that leaves the military even further apart from the society than before.

Still, the military can’t stand entirely apart from the society it protects. For example, many of the most controversial traditions have to do with some type of race or gender issue. The military got rid of most of the truly blatant racism and sexism some time ago. Racism and sexism still exists, but is often far more subtle and open to interpretation, to the point where some can’t see it when it’s right in front of their faces, while others see it when it isn’t there.

The military is not the all-white men’s club it was years ago. Not everyone is going to see everything the same way. That armor or aircraft art with the almost-nude bikini model on it might no longer be the winning idea it used to be. At the same time, commanders shouldn’t go into units Gestapo-style, and seize any picture more risque than a Saudi Arabian family photo, as the Air Force did a few years ago.

A moderate approach to these sorts of questions will make no one completely happy, but is the only way to maintain the bonds with the past while moving forward. The challenge is how to keep the pride and heritage these traditions instill, while still keeping in touch with society as is today. One commander of mine encouraged aircraft crew chiefs to put art on their aircraft, and they could have pretty girls, put they had to be warriors of some kind — e.g., yes to Black Widow dual-wielding, no to Kate Upton in a swimsuit.

It’s hard to institutionalize common sense, but try we must. It’s important to remember that the military has always been tied to the society it defends, even as it stands apart in defense. Even in World War II, civilians exerted their influence over aircraft nose art. Commanders, both at the unit and service level have to have the personal integrity to weigh the pros and cons of tradition, and keep true to the history that got us here, but still moving forward with the society they defend.