After 75 Years, This Missing Marine Is Finally Coming Home 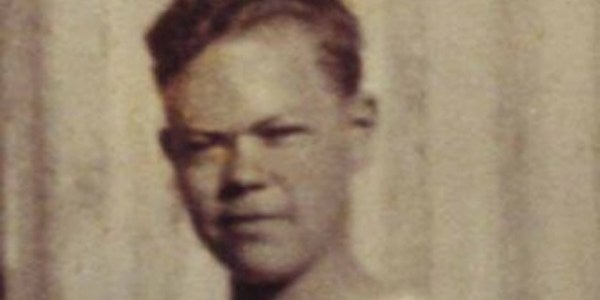 Vernon Paul “Buck” Keaton enlisted in the Marine Corps on May 30, 1941, just two months after turning 18.

By December, he was dead, and the fate of his remains unknown.

Now, thanks to DNA research and a program implemented by the Department of Defense, Keaton is coming home to be buried at Lula, Oklahoma next to his mother and father.

When the call came from the Defense POW/MIA Accounting Agency recovery team, Gentry knew very little about Keaton except that he was her mother's cousin.

“It was a very random phone call,” Gentry said. “They said it had been decided by the Secretary of Defense to disinter the bodies that had been mass buried in Honolulu from the USS Oklahoma and the USS Arizona that had been bombed at the same time.”

The group had found her through her ancestry.com site. Gentry enjoys genealogy research and listed Keaton on her site.

“They requested a DNA sample from me and my sister to identify remains in hopes that they could identify him and send him home,” she said.

Keaton was one of a small cadre of Marines assigned to the USS Oklahoma and died when the Japanese bombed Pearl Harbor.

After the call, Gentry began researching the history of this young, little-known ancestor. She learned Keaton had only been onboard a couple of weeks at the time of his death. He was one of 2,402 U.S. deaths resulting from the Dec. 7, 1941 attack. Of those deaths, 1,177 were from the USS Arizona, while 429 were from the USS Oklahoma.

“The 18-year-old youth's mother clung to hope several weeks after receiving a telegram shortly after midnight on Christmas morning informing her son was missing in action,” The Avalanche Journal of Lubbock, Texas reported on Jan. 20, 1942.

Gentry said it was wartime, and the military was very secretive during that time. The family was asked not to tell people about his ship or station, and they were given very little information on what had happened to their son. Gentry said the family legend was that his mother died fearing sharks had eaten him. They didn't think the body had been recovered.

On April 14, 2015, the Department of Defense announced that the remains of up to 388 unaccounted for sailors and Marines, associated with the USS Oklahoma, would be exhumed, according to a DOD press release.

Upon disinterment, the remains were transferred to the Defense POW/MIA Accounting Agency laboratory in Hawaii for examination and identification.

Gentry said, the POW/MIA officials knew Keaton was on the rolls for the ship and likely to be one of the bodies in a mass burial.

“It was surreal, I didn't know if it was real or not so I had a lot of questions to ask before I just agreed to give my DNA,” Gentry said. “I'm a skeptic.”

After they had convinced her they were who they said they were, Gentry and her sister swabbed and sent in their DNA so it could be matched with remains.

Keaton was from Texas, but his mother was from the Stonewall, Oklahoma area. Buck Keaton was the only son of Guy and Amanda Keaton of Denver City, Texas. Keaton had one sister.

“This guy had to quit high school just a few months before he was to graduate,” Gentry said. “His father had a really bad accident, so this boy had to quit school to work for the family.”

Family thought there was a monument with his name on it, but there was no confirmation prior to this that Keaton had been recovered.

Now with DNA available, unidentified remains from the National Memorial Cemetery of the Pacific and other permanent American military cemeteries were disinterred, but the disinterment policy did not extend to sailors and Marines lost at sea or to remains entombed in U.S. Navy vessels serving as national memorials, according to the 2015 release.

The road to identifying those remains was an unusually bumpy one that started prior to modern technology.

While 35 crew members were positively identified and buried immediately following the 1941 attack, remains recovered by salvage operations from June 1942 to May 1944, were removed from the ship and interred as unknowns in Nuuanu and Halawa cemeteries in Hawaii, according to the DOD.

In 1947, the remains in those cemeteries were disinterred for attempted identification. Twenty-seven unknowns from the USS Oklahoma were proposed for identification based on dental comparisons, but all proposed identifications were disapproved, according to DOD, and by 1950, all unidentified remains associated with the ship were re-interred as unknowns at the National Memorial Cemetery of the Pacific, commonly known as the Punchbowl.

The quest to identify and return the remains of Keaton and others killed in the Pearl Harbor bombing was started by Ray Emory, a Pearl Harbor survivor, who initially just asked for better grave markers, according to media reports.

In 2003, the DOD laboratory in Hawaii disinterred one casket containing USS Oklahoma remains based on historical evidence provided by Emory. That evidence helped identify five servicemen, but the casket contained the remains from up to 100 men, DOD said.

Three weeks ago, Gentry got the call that there was a 99 percent DNA match with some of the remains, and Keaton was ready to be returned to his family. She had found his closest living relative by then, niece Sandra Sue “Susie” Lewis of Wetumka who is making his final arrangements.

“At that point, he had not been actually stationed on the ship,” she said. “He was stationed late November of 1941. He was only on the ship two weeks before the attack. Those guys on that ship had no chance. There were nine torpedoes that hit it.”

On Feb. 20, 1942, the Marine Corps League of Lubbock, Tx was named the Vernon P. Keaton Detachment, according to Gentry's research. She also learned Buck Keaton grew up around horses and had curly hair.

The DOD is covering the cost of the transfer and burial. Gentry and Lewis met with POW/MIA and forensic team representatives on Saturday. Lewis was presented with a book containing historical facts of the bombing along with details of the forensic process and several letters written by Keaton's mother to the military asking if they had recovered her son.

“It was really touching,” Gentry said. “We had to choose a coffin.”

While they only recovered 40 of Keaton's bones, those bones will be placed where they belong anatomically and a dress blue uniform laid on top of them in his coffin.

Gentry said every one of the bones was a perfect match to her DNA.

“They will assign a sergeant from Tinker Air Force Base to fly to Hawaii where there will be a ceremony, and he'll accept the responsibility of escorting the remains home,” Gentry said. “Once he's landed here, there will be another ceremony.”

Eventually, Keaton will be buried with full military honors.

“We don't know how to feel, honestly,” Gentry said. “The niece will be presented a full set of medals, and she'll also receive the flag at the cemetery.”

Gentry's father fought in Germany during WWII as a tank driver.

“He, too, joined the military to help support the family,” she said. “And those sorts of things haunted him for the rest of his life. We couldn't even have fireworks on July 4th because it brought back too many memories.”

She said area veterans will be invited to attend Keaton's graveside service.

“I want the story out there for other veterans because it's important for them to know that this guy did come home,” Gentry said.

For additional information on the Defense Department’s mission to account for Americans who went missing while serving our country, visit the DPAA website at www.dpaa.mil or call 703-699-1169.