Mission Command Is A Balancing Act Between Leadership And Management

Leaders trust, develop the people around them, and think strategically. Managers administer, rely on control, and focus on the nearer... 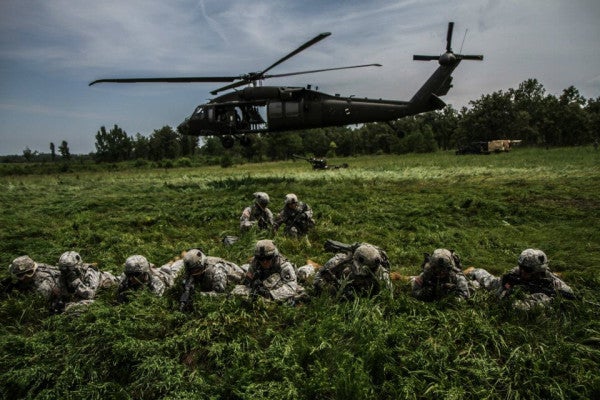 Leaders trust, develop the people around them, and think strategically. Managers administer, rely on control, and focus on the nearer term. When renowned management professor John Kotter made these leader-manager distinctions in the Harvard Business Review over 20 years ago, he didn’t advocate for one side over the other. Instead, he called for balance, writing that “the real challenge is to combine strong leadership and strong management and use each to balance the other.”

Kotter’s framework provides a relevant way to think about the U.S. Army’s philosophy of mission command. Mission command surely calls for trust and empowerment, but it also requires leaders to sustain the right balance between leadership and management on their teams. As a company commander, I learned that failing to achieve the right leader-manager balance can have painful consequences.

Kotter writes that to create a culture of leadership, organizations must identify people with leadership potential, challenge leaders early in their careers, create broadening opportunities, and help leaders build a network of meaningful relationships both in and out of their organization. He also highlights the importance of decentralization — of pushing “responsibility lower in an organization” to create challenging and rewarding leader opportunities. Whether we consider the recent changes in the Army’s evaluation system, the Army’s emphasis on broadening assignments, or the decentralization inherent in mission command, we’ve undoubtedly pushed for more leadership over the past decade.

But what about management? Does mission command ask us to forget the systems, controls, and planning mechanisms that often define (and sometimes burden) big bureaucracies like the Army? The leader-manager tension, illustrated below with a seesaw metaphor, provides a useful way to think about this question.

In the Cold War, the leader-manager fulcrum was closer to the left. We needed more management and less leadership to achieve the right balance against a conventional adversary. Now, we’re clearly closer to the right, fighting small wars that, on balance, require a more leader-focused, empowered force. Mission command is much more about finding the right fulcrum point and keeping both ends of the seesaw in the air than it is about simply letting go and empowering. As we prepare for new wars in a new century, the fulcrum might change, but the necessity for balance and tension will not. Just like any leadership philosophy, context matters.

Different contexts and different fulcrums: The deliberate and hasty assault

As an assault helicopter company in the 101st Airborne Division, we prided ourselves on the “Goldbook” standard operating procedures, the division’s tactical bible that aviation and ground forces reference for air assault planning. These “deliberate” missions come with an exacting standard: Arrive at the ground force’s target within 30 seconds and 50 meters of their original request.

One of our deliberate missions consisted of four Blackhawks helicopters and an attack weapons team of two Apaches, all in support of 40 Lithuanian soldiers and their Afghan partners. After days of planning, our Blackhawk pilots built and briefed a 40-slide deck, highlighting every detail of our air movement plan. The other teammates approached the briefing a bit differently. The attack weapons team commander briefed a single slide, explaining his task and purpose, composition and capabilities. Our Lithuanian commander was even more succinct. He pulled up his slide, turned to the faces in the room, and said, with absolute confidence, “We’re very very good. We can do anything.”

The contrast between the briefing styles warrants consideration. The attack weapons team’s role in our mission required more flexibility than the Blackhawk’s. And while the Lithuanian’s briefing technique is an exaggerated example of simplicity, his ground force surely faced a more ambiguous environment than any aircraft in our formation. The balance between flexibility and control, between leadership and management, was captured in these briefing styles.

Two weeks later, we found ourselves flying a different mission, a “hasty assault.” We sat at a forward operating base with our engines at idle, waiting on an intelligence update for a moving target. Within minutes of receiving the grid, our air assault force — with the same composition as the deliberate mission — was 15 minutes from the target, developing a plan over the internal radio with our passengers. The 96-hour planning process was trimmed to a few minutes. Aircrews and the ground force were thinking and adapting to the fluid environment. Instead of control residing with a commander at the operations center, control sat with the leaders on the objective.

Recognizing this Afghanistan context, I wanted to move our company’s leader-manager fulcrum to the right. A few lessons taught me that if you move the fulcrum, you still have to balance the seesaw.

When the “small” stuff turns “big”

We used an accountability sheet to track sensitive items in our Medevac aircraft. A few months into command, I rarely checked the sheet, trusting its accuracy, and assuming that the chance of losing a sensitive item on a mission was slim. If I focused too much on the small stuff, I wouldn’t be able to focus on leader development, on pushing the fulcrum to the right.

One day, our Medevac aircrew responded to a mission near the Pakistan border. During an aggressive turn, a pair of goggles fell out of the helicopter. The aircrew reported the missing goggles, and my battalion commander asked me for the serial number. I quickly realized that our accountability sheets were out of date. And with multiple aircraft (and sensitive items) out on other missions that day, I knew that it would take me time to identify the missing goggles’ serial number. Needless to say, my battalion commander wasn’t pleased.

Miraculously, a scout pilot found and recovered the goggles later that day, but the embarrassment from the incident stung. Pushing for more leadership couldn’t mean neglecting the basic management systems.

Trust is critical throughout a flight. On many missions, it felt like I was just a faithful puppet. My crew chiefs guided my control inputs with precise verbal commands and helped us stick many tough landings. To me, trust both in and out of the aircraft was as important as the preflight before a mission.

The cockpit of the helicopter has two sets of controls, which presents an interesting way to signal one pilot’s trust toward another. The old adage is to “trust, but verify.” Trusting — which is part of leadership — while verifying — which is part of management — creates a productive, safe working environment in an aircraft. On a training mission one night in Afghanistan, I lost my handle on this balance.

My co-pilot was a gifted, confident aviator. As the training mission began, he requested that we fly to a nearby mountain peak. Landing on the top of a mountain requires deliberate planning, as temperatures and altitudes impact an engine’s performance. The windy conditions added unnecessary risk to this already unnecessary training mission. But I still obliged. I trusted his judgment.

As we approached the peak, we landed without incident and prepared for takeoff. While ascending, my co-pilot spotted a fox. We fixated on the animal. As the tail of the helicopter moved into the wind, we inadvertently limited our available power. Within seconds, we heard the horn that every pilot fears: decaying rotor speed. By sheer luck, we found an escape route into a valley and averted disaster. The silence was deafening as we returned to our base to debrief the incident.

In a few seconds, I lost focus and risked our precious crewmembers’ lives. From a leader’s perspective, I overtrusted and under verified. As a result, the leader-manager seesaw (and helicopter) nearly crashed.

The right fulcrum and the right balance

There’s no question that embracing a philosophy of mission command over the past decade means empowering more leaders on our teams. But looking through Kotter’s lens, mission command also requires us to find the right balance between managing and leading. This balance depends on the context of the situation, whether it’s flying an air assault, landing on top of a mountain, fighting a counterinsurgent, or preparing for conventional warfare. With the goggles and fox, I learned the same lesson that a child learns if his friend jumps off the other side of the seesaw. You slam into the ground and it hurts. As leaders, we have to find the right fulcrum point and keep both ends in the air.