Retired Army Gen. Wesley Clark gave thousands of commands every day of his 38 years of military service. He gave... 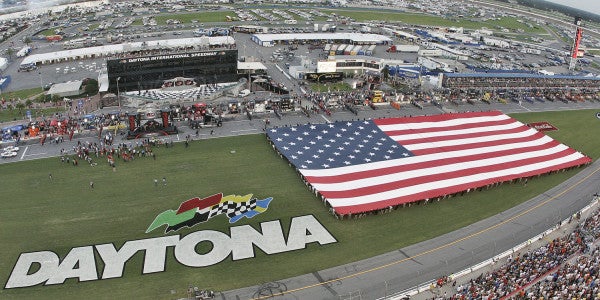 He gave the most important command of any auto race when he served as the grand marshal of the Coke Zero 400. Clark, the former commander of NATO, ordered drivers to start their engines to complete one of the strongest military involvements in the history of NASCAR’s July race.

“I really appreciate NASCAR honoring our men and women who served,” he said during a news conference before the race. “It’s a tremendous thing they’re doing in honoring our veterans. They’re a volunteer force and they serve because they love this country and want to be a part of something larger than themselves. It’s wonderful that NASCAR honors then, especially on this weekend.”

In addition to Clark’s participation, Navy Band Southeast, based at NAS Jacksonville, performed the National Anthem. The grand marshal for the Xfinity race is chairman of the board for Greater Jacksonville USO, retired U.S. Navy Capt. Bob Buehn.

“I don’t think you’ll find a sport more patriotic than NASCAR,” said car owner Richard Childress, who appeared at the news conference with Gen. Clark and his grandson and driver Austin Dillon. “We love our country and we love honoring those who had sacrificed greatly for this country.”

The flyover was conducted by two Navy F-5 CFC-111 Sundowner jets, based at NAS Key West.

For the second consecutive year, race driver David Ragan played host to a patient from Shriners Hospital for the entire weekend.

Riley Desin of Winter Garden has been through “dozens” of surgeries to repair bone spurs. But on Friday and Saturday, he was given complete access to the garage area and pit road.

“The best thing was meeting David and seeing these cars up front,” Desin said. “This has been incredible. I’ve been everywhere with David.”

Ragan took his guest to the drivers meeting, and Desin joined the driver during introductions.

Desin then watched the race from Ragan’s pit stall.

“I’m a Shriner, so this is important to me,” Ragan said. “I also have two children. It makes you appreciate the fact they’re healthy. And it makes me want to help other children feel that way, too.”