This Naval Base Was Just Named Number One In The World

Naval Base Kitsap recently was recognized as the top U.S. Navy base in the world, receiving the 2017 commander-in-chief's award... 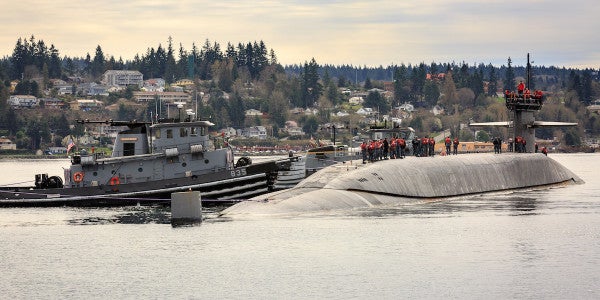 Naval Base Kitsap recently was recognized as the top U.S. Navy base in the world, receiving the 2017 commander-in-chief's award exemplary support of Department of Defense missions.

Installations compete on how well they achieve objectives such as mission support, energy conservation, quality of life and unit morale, environmental stewardship, property management, safety, health and security, communications and public relations. Each winner gets a trophy, flag and letter from President Trump.

Two areas noted about Naval Base Kitsap were its award-winning galley and Morale, Welfare and Recreation activities.

“We believe wholeheartedly in the strength of the family,” said Capt. Alan Schrader, base commanding officer. “It's really important that we take care of those families who are left behind.”

Naval Base Kitsap received $224,000 for base beautification projects after being named top large base in December. Of the Navy's 71 installations, it is the third largest, covering more than 11,000 acres. It is home to nearly 70 commands, 35,000 military personnel and civilian workers, and thousands of residents.