In May, a robust unofficial survey circulated among active-duty Navy personnel regarding retention in the Navy. The survey was the … Continued 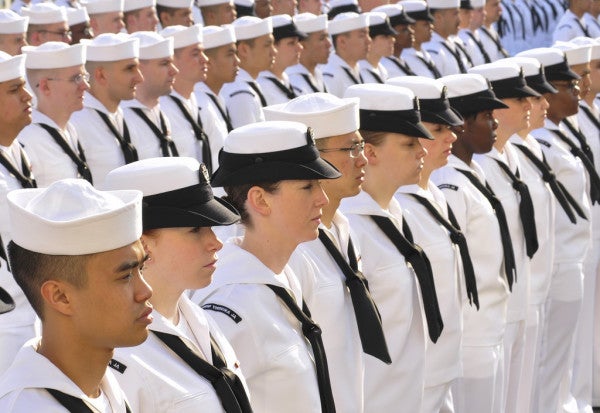 In May, a robust unofficial survey circulated among active-duty Navy personnel regarding retention in the Navy. The survey was the brainchild of a team of active-duty Navy personnel conducting the study in an off-duty capacity. Circulated primarily by word-of-mouth on social media, over 5,500 viable responses were received, with the objective of capturing a representative and accurate depiction of what motivations influence individuals to join, remain, and ultimately decide to leave military service. The survey succeeded in capturing a representative and statistically significant cross-section of both officers and sailors at varied rank and point in career.

The inspiration to create and circulate the retention survey was in reaction to a recent white paper by CDR Guy “Bus” Snodgrass called “Keep a Weather Eye on the Horizon.” The paper points to a looming officer retention problem, and encourages senior decision makers to start approaching manpower with proactive incentives. With this proposed paradigm shift towards retention, the attitude becomes the positive, “What can be done to make people want to stay in?” versus the negative, “How can we keep people from wanting to get out?”

The retention survey seeks to quantify the arguments in the paper. The planning team, led by Snodgrass and several active-duty officers working in their off-duty capacity, state in an open letter that “Those of us on the planning team span the gamut of intentions…All of us, regardless of our intentions, love the Navy and want to see it succeed. We firmly believe that people are our greatest asset, and retaining talented individuals is critical to American national security.”

Questions on the survey first seek to understand the demographics of the participants: officer or enlisted, male or female, and marital status. Of note, the military either considers its members either married or single. This particular survey took note of not only if a service member’s marital status, but also captured whether participants were married to a civilian or military spouse, and also allowed unmarried participants to note if they were in a long-term relationship.

This last category is one that is largely invisible in the Navy, and its presence on the survey immediately indicated that this survey was far broader in scope than mandatory official surveys that get circulated and blindly clicked through in the fleet. While discussing the survey with a fellow female officer, she remarked that she and her boyfriend of two years, who is also in the Navy, told their respective detailers that they were engaged (they’re not) in order to both get orders to the same duty station. Another peer and friend was sent to Bahrain for a year because she and her boyfriend, who remains stationed in San Diego, are not married.

The survey not only captures the reasons why personnel choose to leave the Navy, but what “it’s doing right.” The questions on the survey run the gamut from asking about deployment rotations, to watch schedules, role models, and on-base facilities. Specific attention is given to questions geared toward the various officer designators, as issues endemic to each community widely vary.

While the full results of the survey will not be available until the fall, the planning team recently released preliminary data that should already gain significant attention. Not only were there a statistically significant number of participants, but there was remarkable high representation across pay grades and demographics that accurately quantifies a snapshot of the force.

Of the 5,500 respondents, 56.7% were officers and 43.5% enlisted. Participants were 85.6% male and 13.5% female (the Navy is 18% female overall). Overall junior officers (O1-O3) had the highest participation with nearly 1,700 respondents, or 54.3% of all officer participants. Nearly 1,700 petty officers (E4-E6) also responded, comprising 70% of all enlisted responses. Of note, nearly 1,300 mid-grade officers (O4-O5) participated, comprising 40.3% of officer responses. The high response numbers from the first two groups should come as no surprise, as these are two groups that are most likely to be considering leaving the Navy.

The survey planning team also released the results of five questions on the survey. Sixty percent of respondents believe in some way they are making a difference through Naval service. This also means that 40% are either neutral or disagree that their service matters. When so much of the work day becomes consumed with administrivia, it’s pretty easy to feel like very little attention is focused on warfighting or maintaining tactical proficiency. A strong example that all naval personnel can relate to is having to spend hours on computer-based training to fill an annual wicket. With limited bandwidth available, it once took me three days to complete a single one of these requirements. By comparison, when I took it the following year ashore, it still took me six hours, and even that was clicking through as many windows I could without actually reading any of the material.

In response to the question, “ Do you believe performance rankings are based more on timing or merit?” only 6% responded with “Merit,” and 64% responded with “Timing.” That’s because evaluation is almost entirely based off your time at the command — and this is something that is institutionally accepted. The longer at a command, the better you will generally be ranked. Showing improvement is a requirement for promotion, and therefore someone who has been at the command “needs” it more than you do. This is true of both officer fitness reports and enlisted evaluations. It is extremely frustration for all when personnel who are only mediocre at best are ranked ahead of the best sailors just because of time at the command.

When I was on my first tour, a department head casually asked me over a meal in the wardroom about my intentions for staying in. I responded that I knew what I’d like to do over the next five years, but that I was still unsure about a 20-year or longer career. He responded, “Well, the Navy is great. You have job security, and you don’t even need to be that great. You just have to not get fired.”

Survey responses to “What are your intentions regarding long-term Naval Service?” were far more diverse than the other published statistics. Thirteen percent answered “Remain as long as possible,” and 25% responded “20 years and re-evaluate.” That means that only 38% of personnel are sure about staying in the Navy. The other 62% either know that it’s time to move on, or are still waiting to make a decision. Sixty-two percent is a hard statistic to ignore, but unfortunately many feel that senior leadership either really doesn’t know what is happening at the ranks critical for retention, or choose to ignore it. Furthermore, it is impossible to directly voice concerns of any kind from junior personnel to these higher ranks because everything must be cleared by your chain of command. This means essential feedback gets filtered, stalled, or never reaches a higher echelon of command.

On this note, the most jarring statistics released were the responses to the question,“I believe senior leaders will take action based on the results of this survey.”

Only 16% of participants agreed with this statement, reflecting widespread lack of confidence in senior Navy leadership to actually listen to the concerns of the officers and sailors under their command.

As a junior officer who just reached my minimum service requirement, my peers are a focus group of one of the most critical groups looked at for retention. Most are leaving the Navy — far more than percentages that are typically cited. The vast majority of my peers love the Navy, and will be staying in the Reserves, but found there were numerous systemic issues that make staying on active duty less appealing — highly scripted career paths being a common reason. The sentiment that senior leaders do not actually know or care what the sentiment is in the fleet is certainly an influence.

The ultimate results of the survey will likely be unsurprising to its participants and other currently serving in the Navy. Some may even choose to disregard or discredit the survey because they do not like the responses that it produces. It should be highlighted that the respondents did not have to participate — they responded because they feel strongly and want to make the Navy better. Statistics derived from 5,500 will irrefutably quantify widespread sentiment that can be presented to decision makers and the public. And they will be difficult to ignore.