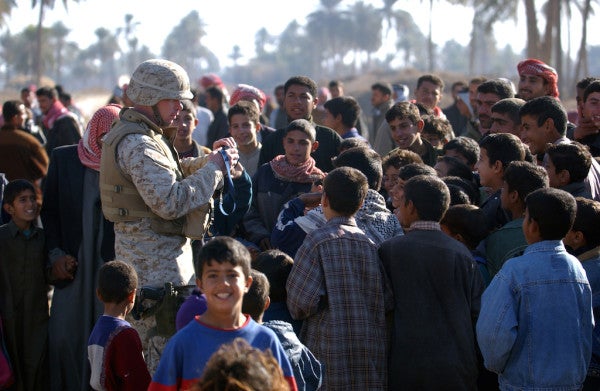 On August 25, 2004, a decade ago today, Lance Cpl. Alex Arredondo was killed in action in Najaf, Iraq, while checking on his Marines’ defensive positions during the final push in the Battle of An Najaf. Arredondo was a team leader in 1st Platoon, Alpha Company “Raiders”, 1st Battalion, 4th Marines. His platoon had recently been fighting from a four-story hotel room during our final push into the old city to surround Muqtada al-Sadr’s Mahdi militia in the Imam Ali mosque, following days of fighting through streets and buildings to secure their current position. The fighting of that month was some of the fiercest and bloodiest in the entire war.

Arredondo was the definition of leader. He was intelligent, inspirational, and warm hearted. He always had a huge smile on his face and was probably the most likeable guy in the entire company.

He was a special operations training group qualified assault climber and he loved climbing. One of my fondest memories of him was one night during an especially cold beach insertion during our Marine expeditionary unit evaluations before deployment. I was the only boot scout swimmer and was loaded down with gear. I had an incredibly hard time making it up his climbing lane, which was too narrow for my pack. Shivering cold, exhausted, and frustrated, I found myself looking up at Arredondo and waiting to be hammered by him for taking so long. Instead, he reached down toward me and instructed me how to get my pack off and lower it down so that I could finish the climb through the narrow passage. When I reached the top, I was met with a warm smile that I will never forget. I moved out and took up a security position atop with the other swimmers along the cliff to finish our reconnaissance and set defensive positions until the rest of the raid group returned for extraction.

It was February and I was still wet from the 800-meter swim in to secure the beach; to make matters worse, it was so cold and windy that my body was stiff beyond shivering and my spare dry clothes were sitting in my patrol pack at the bottom of the cliff below. About an hour later, Arredondo crawled up to my position with my pack; he had gone all the way back down to get it. He pushed it over to me and in almost pure disbelief, I muttered my best, “Thank you, lance corporal,” through uncontrollably chattering teeth. Arredondo gave me the same warm smile as before and said, “Next time, pack less shit, boot”. Then he gave me a wink and a nod and slipped back into the darkness towards his own position.

I always looked up to “Dondo” for the way he treated his junior Marines. He was always quiet, polite, and professional. He led by example and we all loved him for it. The story I mentioned here is just one of the many testaments to Arredondo’s character. He was wise beyond his years and had a genuine heart, caring for junior Marines and the Iraqi people alike. He never looked down on anyone, and in doing so, led everyone who knew him to look up to him.

I have often wondered why God takes the best away from us. I don’t have any answers to that question, but every time I think about Arredondo, I know that God must have had a very special purpose for him and the he is up there smiling down on us all.

Alex, we love and miss you brother, more than you will ever know. We do our best every day to live a life worth living because of your sacrifice. Until we meet again, my friend.