In today’s social media world, we see service members sharing more and more of their daily professional lives online. With... 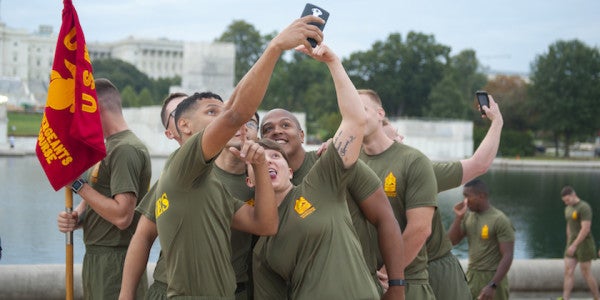 In today’s social media world, we see service members sharing more and more of their daily professional lives online. With the proliferation of sites like U.S. Army W.T.F. Moments, the general public gets a glimpse into the lives of everyday Americans who serve their country. Whether these posts be humorous, heroic, or just stupid and dangerous, they are out there and the trend is not going away.

Within this trend there has been a movement to highlight real professionalism of our military members on social media. Many sites and even more military members are using their platforms to highlight their professionalism. For example, within the special operations community, many service members have taken to social media to post videos on marksmanship, medical care, physical fitness, and equipment selection and maintenance.

These posts have the effect of reaching out to thousands and millions of followers and users, expanding the voice of a single service member who previously may have been simply relegated to telling only his friends what pistol to buy or what is the most effective way to transition from your rifle to a sidearm during range drills.

The new social media platforms are important. These videos, and the men and women who are willing to share their thoughts, are opening up new avenues of communication between civilian and military members. These avenues help to build trust, maintain positive relationships, and help our military communities become more relatable to the outside world. Additionally, we could see positive effects on recruiting the next generation of an all-volunteer force if military members show the outside world what their standards-based methods are all about and how their lives are shaped positively by that belief system.

I recently sat down with one member of the special operations community, a Special Forces NCO who works at a premiere Army marksmanship school, to get his thoughts on why he shares his shooting videos online and why he thinks it is important to spread a message of professionalism and good marksmanship within the ranks.

Sgt. 1st Class “Diggler” shares his professional videos online. He mainly shares content concerning marksmanship, however he has ventured into physical fitness and combative videos. In this regard, he is one of thousands of service members who are taking part in this social media communications revolution — an army of makeshift public affair personnel who don’t need a MOS or duty title to tell a story.

Diggler explains that he shares his videos online because he was “fortunate enough to be hand-selected to be a combat rifle and pistol marksmanship and tactics instructor.” He stressed that it wasn’t because he could simply shoot well, but because he could teach and mentor. Shooting is also his hobby and in this regard posting videos online allows him to further his hobby and continue to teach and mentor to a larger audience.

Related: Is Your Social Media Presence Working Against You? »

He went on to stress that for non-military viewers, most “have a limited to basic understanding of what is entailed in weapons safety and operation.” He can use the videos to educate and demonstrate the importance of safety and operation, furthering his mentoring work.

“Most public gun ranges forbid basic skills, such as drawing and engaging from the holster or multiple engagements,” Diggler said. “How does one truly understand the weapon system without being afforded the opportunity to properly train? It instills a false confidence. My videos show a basic capability I feel should be a standard if one decides to carry as a citizen or is required to be armed as a profession.”

Diggler feels that the military does not place enough emphasis on marksmanship training, though it depends upon the unit. But that is where his videos can step in: to fill a gap for all.

“Yes, most of these units do a fine job maintaining a unit standard of rifle qualification,” Diggler said, “but qualification is not training. Usually when a unit has met its task obligation, it moves on to other more pertinent things involving that unit’s purpose.”

On many of Diggler’s deployments, support attachments became gunners, security details, and attachments to his Special Forces team — some even earning valor awards for their work in combat.

Diggler shares his videos to promote a professionalism of arms within the military community but to the outside community, as well. In this way, he is shaping the military’s narrative on what a soldier is and helping his fellow brothers and sisters in arms build their professionalism to higher levels.