‘Only The Strong Survive In Here’: A Conversation With An American Veteran Serving Life In A Kuwaiti Prison

On the morning of Feb. 21, an American official with the U.S. Embassy in Kuwait paid a visit to Jermaine … Continued 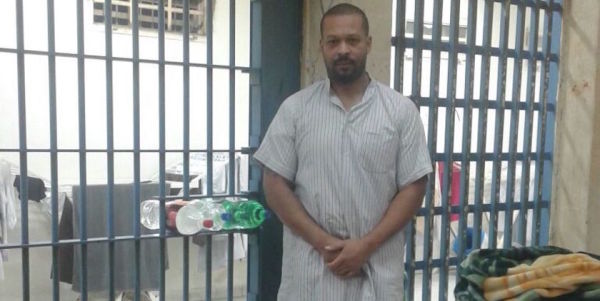 On the morning of Feb. 21, an American official with the U.S. Embassy in Kuwait paid a visit to Jermaine Rogers, a 41-year-old U.S. Army veteran incarcerated at Central Prison, a notorious jail complex on the outskirts of Kuwait City. Last year, Rogers’ sentence — for the crime of possessing seven grams of cocaine — was reduced from death by public hanging to life in prison. He has been behind bars for two and a half years and maintains his innocence. According to Rogers, the Embassy official brought with him a printed copy of a Task & Purpose article, titled American Veterans Say They’re Being Abused In A Kuwaiti Prison And The Government Hardly Cares, which had been published the day before — and he wasn’t happy.

The story of Rogers’ arrest and his family’s ongoing struggle to secure his transfer to the U.S. figured prominently in the article, alongside stories of other American defense contractors imprisoned in Kuwait for drug offenses. All said they were victims of a corrupt justice system that bestows prestige on police who arrest Americans. In interviews and emails shared with Task & Purpose, inmates and their families also expressed deep frustration at a perceived lack of support from the State Department and their employers. (Rogers was supporting U.S. military operation in Kuwait as a contractor with General Dynamics, which fired him three days after his arrest.) Those complaints, Rogers said, are what the embassy official had come to see him about.

“They were a bit upset they received criticism,” Rogers said in a WhatsApp message to Task & Purpose on Feb. 26. “[The consulate official] was extremely standoffish in how he spoke to me. I tried explaining just how bad the situation has become…he said to me that they had other things and people to see…literally they stayed for 15 .”

Rogers served in the Army for eight years and was honorably discharged for medical reasons in 2002. He is a father of five and has no criminal record in the U.S.

Task & Purpose’s Feb. 20 report counted a total of five American defense contractors serving lengthy sentences in Central Prison. Rogers said he knows of eight, including himself — seven men and one woman. All, he said, are African American. Two former inmates Task & Purpose spoke with for the Feb. 20 article are also African American, as are two women — Monique Coverson and Larissa Joseph — who were released from Central Prison in 2016 after serving 11 months on what turned out to be bogus drug charges. Most are U.S. military veterans.

We contacted Rogers after being notified that he had obtained a contraband cell phone. In a series of text exchanges with Task & Purpose, Rogers spoke at length about his arrest, trial, and imprisonment. Many of Rogers’ claims have not been independently verified by Task & Purpose; the purpose of this Q&A; is to give Rogers a chance to tell his side of the story.

A U.S. State Department representative declined to comment directly on Rogers’ allegations. “We work with prison officials to ensure treatment consistent with internationally recognized standards,” the representative said, adding, “We monitor conditions in foreign prisons, advocate for appropriate medical attention, and may protest allegations of abuse against U.S. citizen prisoners when requested to do so by the prisoner.”

Save for a miracle, Rogers — who is rated 70% disabled by the Department of Veterans Affairs and suffers from kidney disease resulting from a rare genetic disorder called Alport syndrome — will likely die in Central Prison, which human rights organizations have described as severely overcrowded and unsanitary. The Q&A; has been lightly edited for length and clarity.

First, what steps can we to take to ensure you don’t get in trouble for speaking with us?

Believe me, Adam, I don’t care about the trouble and abuse anymore. There’s nothing more this corrupt and dirty system can do to me that they’ve not already done.

You said the U.S. consular official was upset about our article. Did he specify what upset him?

He said that I had received special treatment when I was first sentenced to the death penalty, because the embassy made three phone calls to my mother and Karina [Jermaine’s fiancee], and they didn’t have to do that. Although, I know and everyone knows that the U.S. Embassy and government can do way more.

What else did you discuss with him before the meeting was cut short?

I was trying to explain to them that I don’t know what medications the [Kuwaiti prison doctors] are giving me and that they don’t work at all. I just put them in a bottle and stopped taking them. So I was trying to tell them about that and also the fact that I’m in the hallway, sleeping on the floor. The only clothes I’ve got is two pair of underwear, two shirts, one pair of shorts, and two pair of prison pants — and I’m hand-washing with bar soap.

You say everyone knows that the U.S. embassy and government can do more. Have you seen them do more before?

So there’s yourself, Jekenya King, Gabriel Walker, and Tyrone Peterson. Do you know the names of the other Americans in Central Prison?

Lamar, Perry, and Justin. I’m not sure their last names. Lamar and his wife were both given 15 years. She’s in the women’s prison. All have crazy sentences — 15 or 20 years, nothing less so far. All crazy drug charges.

All are African American?

I’ve tried to not bring the racial portion in here but yes. We had one gentleman here last year, , who was charged with using crystal meth and sentenced to five years. He stayed 11 months and was then deported. I don’t know how that happened. I saw him in the hallway before he was released. He was Caucasian.

The Kuwaiti authorities and media have portrayed you as a drug kingpin arrested for trafficking and manufacturing massive amounts of drugs. What’s your side of the story?

A Syrian guy who was friends with my roommate was caught with Spice, like synthetic marijuana. From what I understand, the police went through his phone records and got his name and text messages, and then the guy brought them to our apartment. They raided my apartment and found two bags of Spice in my roommate’s room. That was it. Then I had herbs and different seasonings in the cabinet — literally, cooking seasonings and herbal tea. Have you seen my arrest picture?

Jermaine Rogers in custody after his arrest.

Yes. That’s a lot of drugs and money.

If you see the picture it looks like I’m the biggest drug dealer in the world. Truth is, all this stuff was not drugs and not even mine. My charge is 7 grams of cocaine. All the stuff you see was tested and thrown out except one bag that contained 7 grams of cocaine.

Was the cocaine yours?

I’ve never touched cocaine or drugs or anything else. All those items you saw was ordered off Amazon.com. Some for me and some even for my dogs. I’m a health food naturalist. [The cocaine] was planted by the CID [Kuwaiti Criminal Investigations Department]. It is common knowledge that this is a tactic used by CID to guarantee a conviction.

I heard a rumor that there’s a YouTube video of you showing Kuwaiti police how to make drugs. Does this video exist? I wasn’t able to find it.

One second. I’ll send it to you and explain.

Rogers shares a link to the YouTube video with Task & Purpose.

What are you making in the video?

Exactly. The agent said take this and this and put it inside, then mix this. Well, the liquid is formaldehyde and was for a bug collection for Kiki [Rogers’ daughter, who lived with him in Kuwait until a month before his arrest]. I poured the formaldehyde on the herbs, then the guy gave me the spray bottle with some hair spray. It made a fume that made everybody run out of the office. If you look how the video has been sped up — that’s why.

What were you doing with all of those herbs?

I used raspberry leaf for an herbal tea. I used to mix wood betony with perfumed oils and put it over the coals like incense. Marshmallow leaf is a good relaxation tea, or you can smoke. Same with the chamomile. I would make my own potpourri.

Your fiancee, Karina [Mateo], told me that you were physically abused before the police photograph was taken. Is that true?

Yes. When I was arrested they took me in a room, handcuffed me to a chair, and took a stick and beat my feet and tasered me in the CID office. I told the Embassy about it.

What was the Embassy’s reponse?

At the time, it was a guy whose name is . He was the consular . He said he had no control over the situation. That was when I was in the holding prison. I didn’t know that I could file a case against the CID until I came to . So I asked the American official if he and a translator could at least help me get started with that and he asked me if I thought it was a good idea to upset anymore people in [Kuwait’s] justice system.

Here, you can literally forget about everything you know about the U.S. justice system. None of this makes sense. There are no human rights or human decency whatsoever. The level of corruption is unreal. Even the officer who arrested me was caught planting drugs on another guy and he admitted to doing it. Now he is back working for CID. His cousin was in prison with me and called him on the phone with me and the officer said if I pay him 30,000 Kuwaiti dinar he will get me out of the jail and pay off the judge.

Have you been physically abused recently?

Yes. They have the so-called “special forces” here that come in and do nothing but beat people up and destroy everything. They come pretty much on a weekly basis. Last month, I was in bed at 1:30 a.m. and they came in and dragged me out of my bed while I was asleep. My shirt was torn pretty much from the one grabbing me. I started saying “American, American,” and the guy pushed me on the floor, telling me in Arabic to put my head on the floor. One of them stepped on my hand. I know it was intentional. Then they threw all of my clothes and books on the floor, kicking across the floor. My books, food, all my person items, letters from my mother, everything was thrown away. It was a huge raid. They broke all the bathroom walls and floors. That was a month ago. I’ve been sleeping in the hall ever since.

A former inmate told me that the food situation is pretty terrible, especially for foreigners. How well are they feeding you at the moment?

Hold one minute. I’ll get a pic.

That is how much I was able to muscle away today from the mob. They bring two pans of potatoes and one pan of the cheese with cucumber and olives mixed to feed 160 people. It’s an all out fight for food. It’s like dogs in the street fighting over scraps. Only the strong survive in here. The old and weak — it’s pretty heartbreaking. We used to be able to buy our own rice and meats, even fruits and vegetables, but that privilege was taken last month, as well.