2nd Lt. Santangelo, Ma’am, I recently read your article in the Washington Post about not passing the Marine Corps’ Infantry... 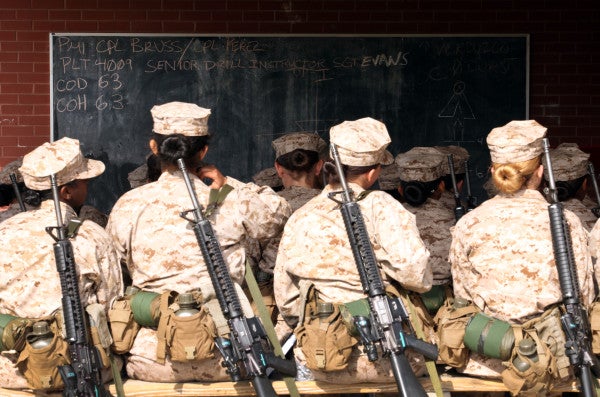 I recently read your article in the Washington Post about not passing the Marine Corps’ Infantry Officer Course and have to say it was quite a thought-provoking piece. Coming from the Infantry myself, I empathize with your frustration at being dropped from some highly sought after training because of physical issues. It’s a tough thing to get over. A few years ago, I was pulled from the Army’s Air Assault School after having trouble with the obstacle course. I’d done well on the pre-requisite 12-mile ruck march and open runs in the Georgia humidity, but it just wasn’t enough. This was immediately following my last deployment, I had a broken nose and wasn’t as physically prepared as I should have been. That walk of shame back to the barracks was painful in many ways. Don’t get me wrong: I’m not making excuses for my failure. I knew the standards and what the school was all about, and for one reason or another I was simply not prepared. No one sabotaged my training or held me back; I just hadn’t done what I needed to do in order to earn that pin. After hearing your story, and with all do respect, this is also where I think you went wrong.

There’s a gap in your logic about how not being trained to the same standard as the men resulted in your failure. You say the Marines’ lack of preparation for women is to blame for your performance at the course and that female trainees overall don’t possess the same strength as males because, “…they’ve been encouraged to train to lesser standards.“ So what you’re saying is that female Marine’s are prone to meeting the role that a male-dominated organization expects of them? Quite frankly, I find that insulting to women in general. What happened to taking the initiative and proving the status quo wrong? I thought the whole argument behind getting rid of gender norming is that females can and do perform to the same standard as men, regardless of where the bar has been set. You said as much yourself when you referenced Sgt. Leigh Ann Hester and her Silver Star. Don’t misunderstand me; I fully agree that women are able to perform as well men, both in and out of combat, and should be allowed to fill such MOS’s. But to say that you didn’t pass because of the double standard while simultaneously representing yourself as a symbol of its absurdity is, with all due respect, both an excuse and self-contradictory.

So let’s talk about double standards for a moment. Imagine I decided to one day shuffle off the enlisted coil and try my hand at something like the Infantry Officer Course. If I fail, what am I supposed to say? That because someone didn’t hand me a specific plan and tailor their operations to my aspirations, I couldn’t prepare? There is no reality in which I could look at my fellow platoon members after failing to keep up and say, “Well, there was no one back here making me work on strength and conditioning, so there’s no way I could have been prepared. It’s not my fault.” Everyone I know worthy of being a leader would laugh me out of the barracks.

There are many units whose regular PT sessions lack the intensity and specificity needed for this kind of rigorous assessment. Weren’t there 24 men in your class who didn’t make it, either? They were supposedly trained to a higher standard. What does that tell you? It’s all about proper prior preparation, as the saying goes. You could say you didn’t have what you needed to succeed, or you could learn from those who graduated how they did.

Obviously, there are inequities in the system. We’ve all seen more than a few male combat leaders who have no business being there despite meeting the standards, and to show initiative and motivation in seeking out that responsibility already says something positive about you. While wildly unfair, though, the reality is that for the time being, you and women like you need to leave no doubt as to your abilities in order to blaze that trail. This will only come from training hard and not blaming low expectations. You will never have the resources you need, the information required to solve every problem or the time to come up with the perfect plan. Your leaders will always expect you to far exceed the minimum requirements. Even more importantly, the men and women you lead will too. You train when and where you can, with what you have available right now, and often under far less than ideal conditions. Obstacles will always exist; official polices, past and present, are no exceptions. You can’t change what’s happened or let it weigh you down. Adapt and overcome. Think of the course as a test to help prove that you can.

I sincerely hope you do get a chance to go back to the IOC and are able to play a role in dispelling the myth of gender disparity. Whichever route you take, I’m sure you’ll be successful and I wish you the best of luck as you embark on the adventure.

Correction: A previous version of this article misstated the name of the author. This piece was written by Daniel Gorman.