An Original Rosie The Riveter Dies At 93

One of the original Rosie the Riveters who helped win World War II died this morning in Livonia, her family … Continued 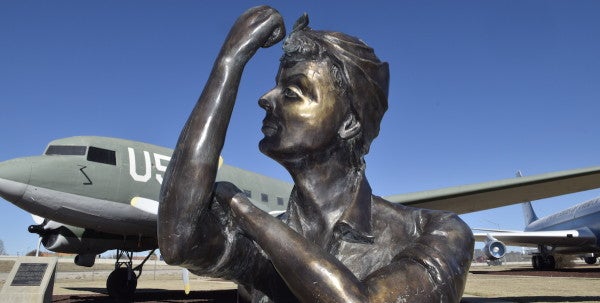 One of the original Rosie the Riveters who helped win World War II died this morning in Livonia, her family said.

Sarah Blanche Mahrle of Plymouth was 93. She worked during the war effort at Willow Run Airport, where B-24 bombers were built. She was also “a great family lady,” said her nephew, Dale Mahrle, of West Bloomfield.

Mrs. Mahrle was one of about 30 women on an honor flight to Washington, D.C., in March 2016, where they were recognized for their service. During the war, women took jobs traditionally done by men, including Rose Will Monroe, who was the inspiration for the Rosie character that came to symbolize female empowerment and the “we're-in-this-together” spirit of the American home front, according to an Associated Press report.

More than 310,000 U.S. Women — known as Rosie the Riveters — joined the aircraft industry in 1943, comprising 65% of its workforce, said U.S. Rep. Debbie Dingell, D-Dearborn, during a ceremony in August 2016 honoring two women who weren't on the honor flight.

Dale Mahrle said his aunt died of a stroke at St. Mary Mercy Hospital in Livonia.

Arrangements were made by Vermeulen-Sajewski Funeral Home.

Visitation is 4-8 p.m. Thursday. The funeral will be at 11 a.m. Friday at Christ Our Savior Lutheran Church, 14175 Farmington Road in Livonia.