A local paralyzed veteran who wrote the official Wounded Warrior Creed adopted by the Marine Corps has died. Retired Army... 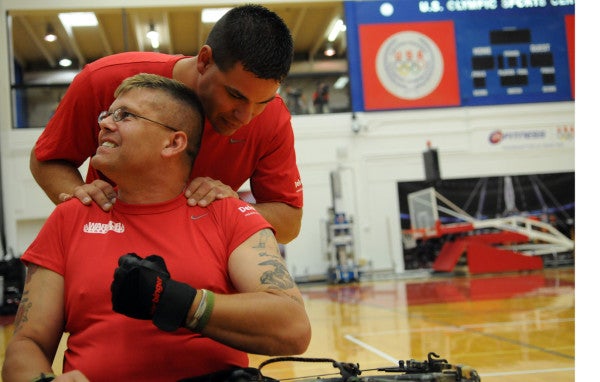 A local paralyzed veteran who wrote the official Wounded Warrior Creed adopted by the Marine Corps has died.

Retired Army Sgt. Joseph “Joey” Smith, a career military man who also served in the Marines, died Sunday at Kindred Hospital in Greensboro, following a massive stroke he suffered in May. Smith, who lived in Thomasville, North Carolina, was 46.

“Joe was a patriot more than anything, and he loved his country,” said Smith’s ex-wife, Debbi, a former High Pointer who remained friends with Smith after their divorce earlier this year.

Joey Smith, a member of the Marine Corps team, will compete this year in archery, air rifle and pistol events during the 2013 Warrior Games in Colorado Springs.DoD photo

“He said to me many times that even though he was hurt, he would go back to Afghanistan to serve, even in his wheelchair. He was a very proud American, he was proud of his country and he was proud that he could serve.”

In 2005, during Smith’s fourth deployment in Afghanistan, he suffered a spinal-cord injury that left him paralyzed from the waist down. While hospitalized and watching the struggles of his fellow injured soldiers — not to mention struggling to find purpose in his own life — Smith penned the inspirational words that the Marine Corps later would adopt as its own “Creed of the Wounded Warrior.”

“Though I am wounded,” he wrote, “I will always be a warrior. I will never give up, nor quit in the face of adversity. I will do my best in all that I do and achieve. I will not allow my injuries to limit me, and most of all, I will never forget my fallen comrades or leave a fellow injured warrior behind.”

The creed and what it represented meant a lot to Smith, his ex-wife said.

“That was something he was very proud of,” she said. “A lot of the wounded warriors said he was very inspirational to them.”

Smith lived up to the creed, too, competing for several years in the Warrior Games, an annual, Olympic-style sports competition for wounded or ill military personnel and veterans. He won a gold medal in the air rifle competition, and competed in other sports such as swimming and archery.

He and his then-wife settled in Thomasville in 2011, when they moved into a new, handicap-accessible house provided through Homes For Our Troops, a nonprofit organization that builds houses for severely injured veterans. The approximately 2,400-square-foot house gave Smith a level of independence he would not have had otherwise.

As of Monday afternoon, funeral plans for Smith were not yet complete, but Debbi Smith said a celebration-of-life service will be held, and Smith likely will be buried at Arlington National Cemetery.