Cpl. Legend, a mascot who has served as a Parris Island morale booster since 2011, died Sept. 17, according to... 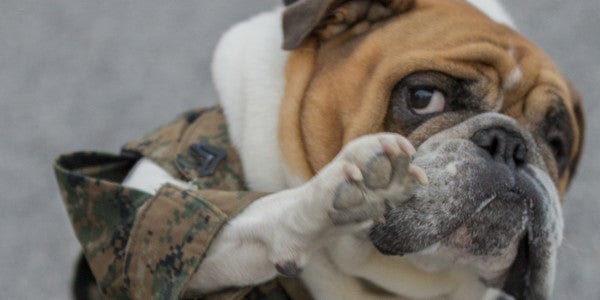 Cpl. Legend, a mascot who has served as a Parris Island morale booster since 2011, died Sept. 17, according to a release from the depot.

The English Bulldog was found unresponsive and taken to the depot’s veterinary clinic where he was pronounced dead, according to the release. It states a funeral ceremony will be held at 2 p.m. Oct. 13 at the depot’s mascot cemetery.

Cpl. Legend, the depot’s 20th mascot, was diagnosed with a heart condition earlier this year and placed on a limited work schedule pending his retirement, according to the release.

“Legend was a very relaxed dog, “ Lance Cpl. Alicia Stull, administrative clerk with Headquarters and Service Battalion along with Legend’s caretaker since August 2016, said in the release. “It taught me how to be more patient as a person, since he was a very laid back dog.”

As a morale booster, he participated in the motivational run on family day, the depot’s morning colors ceremony and graduation, the release states.

Cpl.. Legend enlisted in the Marine Corps on Nov. 4, 2011, and graduated from Hotel Company, 2nd Recruit Training Battalion, as an honor graduate, earning him meritorious private first class. He was preceded by Sgt. Archibald Hummer, who died in September of that year.

“Each time I left my room, he would run behind me and look at me like I was never going to come back,” Stull said. “So I always took him with me wherever I went. He was like my baby.”

Opha Mae is set to take over the post as the depot’s first female mascot. She is currently in training with Platoon 4044, Papa Company, 4th Recruit Training Battalion and is scheduled to graduate on Nov. 17.

“She is excited about anything or everything you put in front of her,” said Cpl. Cameron Philips, an administrative clerk with Headquarters and Service Battalion. “She is very social and energetic; her people skills are why she will fulfill her new role excellently.”