A Presidential Election Without Veterans Has Become The Status Quo 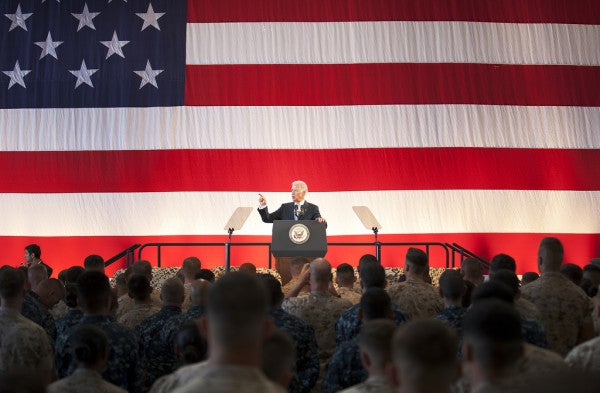 Candidates for president in 2016? All of them, potentially. But here’s something else — not one served in the military.

If press reports are to be believed, Hillary Clinton is considering Virginia Sen. Tim Kaine and Secretary of Housing and Urban Development Julian Castro as running mates. Neither served in the military, though Kaine’s high-and-tight haircut certainly deserves some recognition from the military community.

This coming presidential election cycle looks likely to be the second straight presidential contest without one veteran on either ticket. (President Barack Obama and Vice President Joe Biden did not serve; nor did Mitt Romney and Paul Ryan.)

With such a dearth of military veterans in high public office, who has replaced us? It is tough not to notice that as the number of veterans in Congress and in the 50 state governor’s mansions has gone down, the number of millionaires occupying these seats has increased precipitously.

Just 101 members of Congress, 19% of all members, have served in the military, down from 70% in the 1970s. Meanwhile, a majority of members of Congress are now millionaires. And the governors of Illinois, Michigan, and Florida each have a net worth of more than $150 million.

It is certainly not a new trend that so many wealthy individuals are doing so well in American politics. Six U.S. presidents, including George Washington, are estimated to have held a net worth of more than $100 million in today’s dollars.

What is new is the premium placed on money in campaigning, and the limited capacity of veterans to raise those funds.

The rules of professional advancement apply to politics, too, of course. Those looking to run for public office first need to build support among party bosses, volunteers, and lots and lots of donors.

It is far easier for a faithful staffer to place him or herself in front of party donors than a returning veteran who has spent the last five to ten years rotating between remote military installations and Iraq and Afghanistan.

Organizations like VoteVets have mobilized to recruit and ultimately fund Democratic candidates running for elected office. Parallel organizations like Combat Veterans for Congress and Vets for Freedom have similar goals for the conservative side. Yet, their efforts have failed to markedly increase the number of winners.

A Congress and executive branch light on military experience can lead to some strange and outrageous politics.

Would a Congress with 200 veterans, or 300 veterans, invite a foreign leader to come speak in front of a joint session to undermine the stated foreign policy of the president?

If more veterans were sent to Washington, would lawmakers feel more empowered to make needed cuts into military pensions and Tricare?

And most importantly, would a Congress with more veterans be more reluctant to approve the use of military force? As policymakers deliberate over providing President Barack Obama broad authorization to use military force against ISIS, the few military veterans in Congress — even the first termers — have become the most prominent and respected voices on Capitol Hill, both for and against the measure. As described in this New York Times article published Feb. 17, “The veterans are raising questions that the Obama administration will have to answer about its military commitments abroad, from the precise role that ground troops should play to whether the three-year time frame that Mr. Obama has proposed for fighting the Islamic State is correct.”

There is a great deal of value in business experience and business success in elected office. I am also not disregarding every ten- or 20-year staffer who parachutes in from Washington to ascend to his or her boss’ seat. Yet a Congress and a succession of presidents who have never known the experiences of the 2.2 million troops they command is dangerous, and worse yet, it appears to be a systemic defect of our political institution.