Remains Of Navy Pilot, Missing Since 1966, Recovered In Vietnam

Little is known about the life of former La Cañada, California resident James Reginald Bauder, though his name and military... 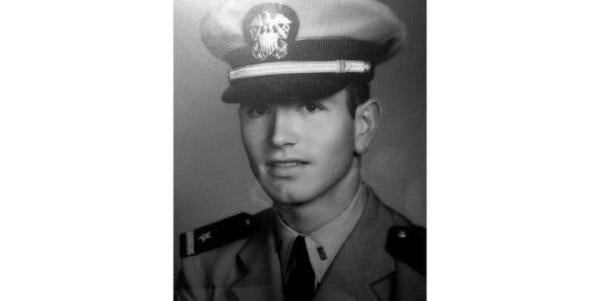 Little is known about the life of former La Cañada, California resident James Reginald Bauder, though his name and military rank appear on a bronze plaque in Memorial Park honoring those who lost their lives in service to their country.

The son of Los Angeles Superior Court Judge Reginald Bauder and wife Dorothy, who lived on Ocean View Boulevard, James was a 35-year-old lieutenant commander in the U.S. Navy’s Fighter Squadron 21 serving onboard the U.S.S. Coral Sea off North Vietnam on Sept. 21, 1966, the night his plane went missing.

Harlan Updegraff, who also hailed from La Cañada at the time, was working onboard the U.S.S. Coral Sea that day in 1966. An aviation structural mechanic third class, he was responsible for filling fighter jets with liquid oxygen before they went on missions.

Before takeoff, Updegraff signaled to pilots with a thumbs up or down to confirm whether their oxygen supply was functioning. The La Cañadan would be one of the last people to communicate with Bauder on that fateful night.

“I knew the names of the pilots because their names were below the canopy on the sides of the jets,” recalled Updegraff, 71, who now lives in Tennessee, in a phone interview. “I didn’t know [Bauder] was from La Cañada at the time — he gave a thumbs up. I saluted him as he took off.”

Later that night, Updegraff and others onboard heard an announcement from the captain that two men had been lost on that night’s bombing mission. No one in the sky with Bauder ever saw his plane go down or heard a distress call. No wreckage was discovered in the searches that followed.

Lt. Cmdr. James Bauder, top row, center, was a pilot assigned to the Navy's Fighter Squadron 21 in September 1966, when his plane went missing during a nighttime armed reconnaissance mission over North Vietnam.Courtesy photo

Bauder left behind wife Sara, whom he’d met while training in her hometown of Pensacola, Fla., and their two children — son Chris, 6, and daughter Jane, 4. The family was living in a modest house near an air base in San Diego when they got the news.

“I was pretty devastated when I learned he was lost, which is how my mom put it to us,” recalls Jane Bauder Castellani, now 55 and living in Pensacola. “He was like my idol.”

A self-proclaimed daddy’s girl, Castellani’s memories of her father are vivid, if episodic.

She remembers him working on cars with a neighbor, or the times he’d come home from the ship for a visit, when “it was like every holiday wrapped into one.” In another memory, right before her father left for his second tour in Vietnam, she’d missed out on flying kites in the yard because she hadn’t finished her orange juice.

With sadness, she recalled this week the time he flew alone to Florida to bury her infant sister Jennifer, a “blue baby” who’d died not long after she was born.

In the months that followed Bauder’s disappearance, his father Reginald would die from complications of cancer, according to a Nov. 10, 1966, issue of the Valley Sun. Dorothy would later have to leave the family home on Ocean View Boulevard when it was declared uninhabitable due to a crevice that opened up in a nearby hillside, according to Castellani.

Bauder’s wife would pack up the kids and head back to Pensacola to be closer to her support system, her daughter recalled. She would be hospitalized once for a nervous breakdown, but would rally and return home. Some seven years later, the time after which Bauder would be presumed dead, Sara would go on to remarry a neighbor who’d lost his wife.

But the family’s loss would never truly heal, no matter how much time passed.

“There was still the wondering. The only way I can accurately describe it is emptiness,” Castellani recalled. “The loss of my dad, it affected me really bad. I had a difficult time coping.”

Was he still alive? Was he living somewhere with amnesia, and maybe with another family? These thoughts ran through Castellani’s head as she grew up, turned to less-than-ideal situations for the momentary escape and release they offered, then suffered the consequences of her decisions.

Family members received occasional updates from the Navy’s Casualty POW/MIA Branch, saying they’d located a piece of a plane or a speck of bone — but nothing had ever panned out.

Then, on Sept. 8 of this year, Castellani got an email that would send a lifetime of fears and speculations to a grinding halt.

“I do hope this email reaches you,” read the missive from Branch Head Rudy Gonzales. “Please call me, I have some very important information regarding your father.”

Castellani made the call and learned a piece of bone — a femur — had been found in June in the area of North Vietnam where her father’s plane was last seen. A test matched its mitochondrial DNA to a sample submitted years earlier by Bauder’s younger sister, Jane.

“I was just numb and in shock,” Castellani said. “It floored me.”

She tried to call her aunt and namesake, Jane Bauder Darrow, a noted watercolorist living in Sedona, Ariz., only to learn from cousin Mike she’d died just days earlier. Castellani’s own mother died in 2011.

Now, with her cousin and brother, Castellani is making arrangements to meet with Navy representatives in November to get a full account of the search and what it turned up. Plans are being made to have her father’s remains interred at Arlington Cemetery with full military honors.

Updegraff, who found Castellani online and has communicated with her over the years, says he can’t wait to attend and lay to rest a mystery that’s lasted more than half a century.

“It feels good that he’s home,” he said. “My shipmate was shot down and now he’s back.”

For Castellani this last memory of her father, his homecoming, is bittersweet.

“It’s been decades of wondering and hoping, and not hoping, then hoping again — like a yo-yo,” she said. “When the news finally came, I didn’t know how to feel about it. I didn’t cry. I wasn’t happy. I was just kind of stoic.

“I’m still kind of not sure how to feel about it — it’s still sinking in.”