‘We Are A Service That Is Too Small’: An Air Force In Crisis Looks For A Shakeup

The Air Force has over the past few years grappled with operational demands that have drained its resources and strained... 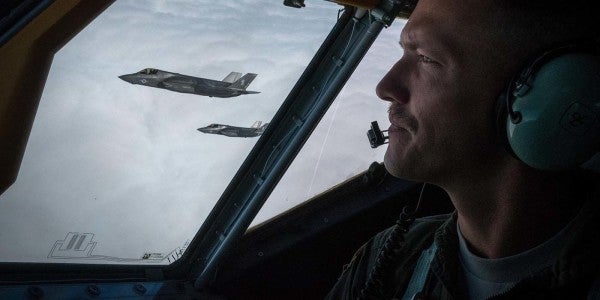 The Air Force has over the past few years grappled with operational demands that have drained its resources and strained its personnel.

Wars in the Middle East, ongoing tensions in Europe and Asia, and budgetary issues are a few of the issues that confront a leaner Air Force.

In recent months, the service, which celebrates its 70th birthday on Monday, is looking at personnel and administrative shakeups to streamline the way it recruits, trains, and deploys.

“We are a service that is too small for what’s being asked of us,” Air Force Secretary Heather Wilson told Air Force Times at the end of August.

“We have readiness issues at home already, and if we were to have to continue next year, either on a continuing resolution that flat from last year or, even worse, under a sequester … it would be devastating, and years to recover from it,” she added.

According to the Government Accountability Office, less than 50% of the Air Force's units were at acceptable readiness levels. The highest-profile personnel issue facing the service may be its shortage of qualified pilots.

To reverse that trend and keep pilots in uniform, the service plans top boost pay and bonuses, ask retired pilots to return and bring more support staff to free fliers from administrative duties, increase the number of pilots it trains each year, and give personnel more say in their rotations.

The Air Force is also outsourcing some of its “red air” needs by bringing in outside pilots to play the role of rival aircraft. It is also converting mothballed F-16s into training aircraft for manned and unmanned exercises.

But pilots are not the only Air Force members who find themselves taxed by a high operational tempo.

Air Force Special Operations Command has borne the brunt of 16 years of military operations.About 1,200 AFSOC personnel are deployed to over 40 countries at any given time, AFSOC commander Lt. Gen. Brad Webb told Air Force Times. With only 14,461 active-duty officers and airmen in the the command, the scale of those deployments “can obviously create demands on them and their families,” Webb said.

“We have many airmen who have deployed more than a dozen times in the last 15 years. That's a deployment rate our nation has not seen before,” Webb said, noting that his command has had to get waivers from the secretary of defense to allow more frequent deployments.

For regular airmen, demand is high as well. The pace of deployments was high in 2017 and is expect to remain the same in years to come.

“We can anticipate that the thickness of the training events and exercises that occurred in 2017 will be equally as thick in 2018, and we think those numbers of events are just about right,” Gen. Tod Wolters, head of US Air Forces Europe-Air Forces Africa, said on September 8.

The more than 30,000 Air Force personnel in Europe now are enough to meet the service's needs, Wolters said. Despite concerns about pilot shortages and the amount of downtime, he added, “We certainly have the right number of airmen in theater at this time, when you take into account the ones we rotate in on an episodic, periodic basis.”

The Air Force is also looking to fill gaps in its ranks of officers and enlisted personnel through promotions.

This month, it said 2,001 enlisted airmen had been picked for supplemental promotions, which are typically given to airmen who face extended temporary duty assignments or are deployed to work on contingency operations.

In December, the Air Force will also offer 100% promotion opportunities to officers at captain rank.

As long as they're qualified, recommended for promotion, and have an unblemished conduct record, the promotion is assured.

“There have been no major changes to the Officer Evaluation System in nearly 30 years, but there have been significant changes to our force composition, mission, requirements and how our performance system reflects what we value in officers,” Lt. Gen. Gina Grosso, Air Force deputy chief of staff for manpower, personnel, and services, said in a release announcing the promotion opportunity.

Those promotions come as the service is also reviewing and implementing other changes meant to adjust the administrative burden faced by airmen, as well as the strain service puts on their personal life.

“We strive across the command to encourage our airmen to achieve work-life balance,” said Webb, the head of Air Force Special Operations Command. “Air commandos are proud of what we continue to accomplish alongside our joint partners, but we also know the importance of resiliency.”

US airmen “are doing some amazing things,” Chief Master Sgt. Kaleth Wright, the Air Force's top enlisted man, told Air Force Times. But they're also dealing with manpower shortages, a lack of funding and resources, a high operational burden, and a plethora of extra duties, all of which has inspired frustration and stress.

“We can’t ask the world to calm down and not be so unstable,” Wright added. “Absent that, the best thing we can do to make our force more efficient and more effective and lethal is, with some of these additional requirements that we’ve levied upon them over the years, let's slowly take them away, right?”

Wright said the Air Force is weighing the elimination with some performance evaluations and some units have pursued programs to improve mental health and resiliency. The Air Force has lost 62 airmen to suicide this year and looks set to match the 100 suicides seen in most years.

In addition to mental-health and professional-development initiatives, Grosso said the Air Force has started a broad overhaul of its personnel information technology systems.

The service's personnel operations run on 200 applications using 111 different systems that date to the 1990s. Streamlining those operations will ease the manner in which airmen can handle personnel issues, like problems with paychecks that roughly 5,000 airmen deal with each month.

Grosso also said the service was looking at a two- to three-year overhaul of its performance management and evaluation systems.

“We’re not trying to speed through this,” Grosso told Air Force Times this month. “We need to get this right.”

The operational demands the Air Force faces look unlikely to ease in the near future. Despite a series of victories against ISIS in Iraq and Syria, partner forces there will need support going forward.

That, coupled with the potential expansion of Air Force duties in Afghanistan, will come as the US military faces heightened tensions in Eastern Europe and northwest Asia.

“Air superiority is not an American birth right. It’s actually something we have to plan for, train for, fight for and win,” he added. “I see it as nothing short of a moral obligation that when any soldier or airman hears a jet noise overhead, they don’t look up. They know it's us.”