Good news, green-suiters: The Army is finally admitting that its physical fitness test “in no way helps Soldiers focus on... 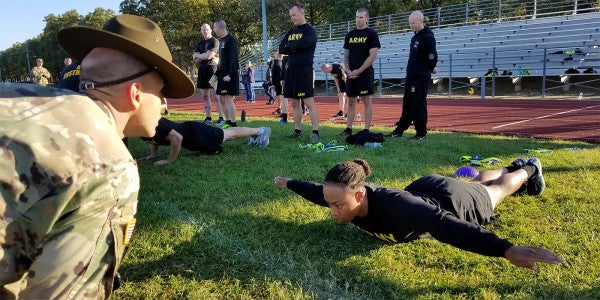 Good news, green-suiters: The Army is finally admitting that its physical fitness test “in no way helps Soldiers focus on preparing to do their jobs.”

That’s according to an Oct. 20 Army dispatch from Fort Leonard Wood in Missouri, where a bunch of sappers, military cops, and other soldiers are trying out the service’s more-challenging, but frankly more-fun-looking, proposed PFT replacement: the Combat Readiness Test.

The combat fitness evaluation is “part of a wider holistic health and fitness effort to optimize Soldiers,” the Army says as only it can, with a touch of new-ageyness and weird efficiency-speak.

The apparent consensus on post? The new test beats what soldiers are doing now. “I think it's a really good program,” Spc. Priscilla Gibson, a Human Resource specialist with the 169th Engineer Battalion, said after her shop took the CRT. “If you train for it, it will definitely get you more physically fit than the current PT test. It challenges you more; instead of three events there are six.”

Six events! And they’re not exactly stuff you can sail through while still half-asleep at oh-dark-thirty, in the grand tradition of seasonal unit PT testing. Designed to reduce injuries and be more reflective of physical labors that soldiers can actually expect to perform on the job, the CRT looks like something your first sergeant picked up from watching the youngs do Crossfit. It consists of:

T pushups: You do a pushup, but when you’re down, you prop yourself on your gut and spread your arms out to the sides. Repeat for two minutes, or until you’re swimming.

Leg tuck: Grab a pullup bar with both hands like it’s the hilt of a broadsword, and start from a dead hang. Bend your elbows, hips and waist till the knees touch those elbows, then pop back to a dead hang, then do it as many times as you can while not looking like you’re enduring torture. Just kidding: You don’t get extra points for stoicism. But you don’t get any points for grunting and grimacing, either.

Standing power throw: Grab a 10-pound medicine ball, lower it to the ground, then heave that sucker backwards over your head as far as it will go. Don’t worry, you get a practice throw. This mostly just sounds therapeutic.

3-repetition deadlift: Exactly what it sounds like. Dropping the bar on the last rep and screaming primally while your veins bulge is optional.

2-mile run: Are you kidding? I exhausted myself just writing this far.

The Army says an estimated 2,000 soldiers on five bases, including Leonard Wood, are expected to try out the test before any decisions are made on its future. No one’s even sure how the events will be scored yet, except to say that there’ll be tiered standards — no straight pass/fail events here.

But just because there’s no service-wide launch date on this thing, don’t act surprised when the CRT replaces your PFT. “If the Army creates a program to train for these events then absolutely (it will better prepare Soldiers for combat),” 1st Sgt. Alan Forester II of Company D, 31st Engineer Battalion said in the Army’s Oct. 20 release. “The training would be better-rounded and address other aspects of fitness, such as power.”

Your first sergeant likes it! Which means you’d probably better learn to love it, too.

*Update, 9 AM EDT, 10/25/2017: A representative of the Army's Center for Initial Military Training reached out to let us know that the Army's Oct. 20 release omitted a 50-meter sprint from its description of the 250-meter “sprint/carry/drag.”

Without that sprint, she said, “the description only adds up to 200 meters. So our public math has not been good and for that we apologize and are working to request corrections.” This article has been updated to include the full five stages of the 250-meter event.