How A Superbowl-Winning Coach Would Have Intervened In Iraq 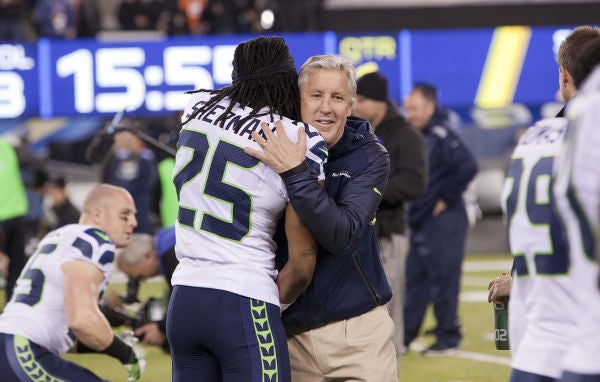 Carroll recently shared his thoughts with the Seattle Times’ Jerry Brewer on U.S. policy in Iraq.

The U.S. recently actively re-engaged the region after roughly a decade of intense war, launching airstrikes and dispatching military advisors and assets to quell the rise of the militant Islamic State of Iraq and Syria.

But here’s how Pete Carroll would have handled things, as told to Brewer, who describes Carroll as “trembling with intensity. His eye contact is so powerful that you can’t look away from him.”

Let’s say, after all the stuff that we heard about what was going on in Iraq, we sent 10,000 people to Iraq as peacefully as we could go. And we walked wherever they would let us go, and we just talked to people and listened to what their issues were. And then we tried to figure out the best way we could support them and change things, as opposed to bombing (expletive) thousands of people with shock and awe. It might’ve taken us longer to influence change, but nobody would’ve died. And the power that we could’ve generated by just being willing to listen and see if there was a way we could answer their call and help them, whatever they wanted.

Not tell them what to do. Not change them. Just help them go where they wanted to go. What if we had done that? How much money would that have cost us? Give me a thousand peace workers that would go over and do that. Just listen and talk. Think of what we could’ve done, as opposed to killing hundreds of thousands of people or whatever we did. And leave the wrath of what we did.

Carroll’s views on international relations are far from mainstream. In 2011, Deadspin reported that Carroll bought into many conspiracy theories surrounding the 9/11 attacks.