That Valor Isn’t Yours To Defend

Recently, Task & Purpose published a piece that highlighted the actions of some purported Army Rangers who called out a … Continued 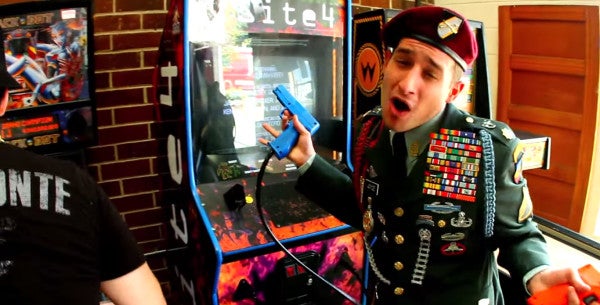 Recently, Task & Purpose published a piece that highlighted the actions of some purported Army Rangers who called out a man for claiming that he was a Navy SEAL. He clearly wasn’t, but the Rangers filmed the incident, during which they slapped the man in the face, twice, and then posted the video on the Internet. It went viral.

When I saw the video I was embarrassed, less for the man they humiliated and more for the Rangers, and the Army that they serve. Supposedly, these men were acting on behalf of all veterans (three against one) by calling out an imposter for stealing something from us that he hadn’t earned. But what exactly had he stolen and from whom?

Stolen valor groups, largely composed of veterans, like Guardians of Valor, claim they “seek to protect the Uniforms of the services and the Valor, Integrity and Honor” that they believe is automatically accrued by those of us who serve in the military. I served in the Army for 30 years and I have a drawer full of awards and decorations, but not one of my awards or decorations mentions valor.

The military does honor a small fraction of us with awards for valor, but those who receive this recognition are few and far between. Valor is a recognition that is bestowed by others on those who demonstrate courage or bravery in situations of extreme personal danger. Valor is high praise and not everyone in the military is deserving of such esteem. I find it disturbing that groups of veterans claim they are protecting our valor, something we may or may not have earned in the first place. This is a form of self-promotion that I find offensive and results in soldiers like these Rangers acting badly.

The Rangers’ behavior stems not just from this sense of automatic superiority that they accrue by joining the military, but also by codification of stolen valor as a crime. In December 2006, President George W. Bush signed into law the Stolen Valor Act of 2005, which made false claims of receiving military honors and decorations punishable by fine and/or imprisonment, but it was ruled unconstitutional in 2012. Apparently, simply claiming that you are something that you are not isn’t a crime. A subsequent Stolen Valor Act was signed into law by President Barack Obama in 2013, which more narrowly defined what constitutes stolen valor. The new law essentially boils down to fraudulent actions that result in some form of personal profit gained by the claimant.

Why we need a “Stolen Valor Act” for actions that could be prosecuted under traditional fraud statutes rests on a cultural desire to single out the military for some elevated status. Oddly, someone who falsely claims he or she is a doctor, a firefighter, or even a police officer isn’t accused of stealing valor, integrity, or honor.

I come from a family of cops. In the course of cops’ career, most have been assaulted, many have been injured, and all have knowingly and willingly walked straight into dangerous situations on a routine basis. But police aren’t protected by a stolen valor act. There are laws that prohibit citizens from impersonating public officials, especially police officers, but they have nothing to do with stealing their valor. These laws vary by state and range in severity from misdemeanor to felony charges depending on the circumstances of the impersonation.

Putting the military on a pedestal has some very negative downsides. Namely, it says that not only is it unacceptable to impersonate us or even to claim to have served in the military it has made some believe that we can’t even be criticized. Outsiders who criticize us are viewed as unpatriotic. This is a dangerous course to chart and one that the military should zealously avoid. Growing, learning organizations must accept, even invite, criticism if they are to improve.

So what exactly had the man in the video stolen? He had actually offered high praise to Navy SEALs by saying he wanted to be just like them even if he wasn’t. Who hasn’t heard the idiom, “Imitation is the sincerest form of flattery?” Certainly, he gained no personal profit from his claim and he violated no law. He didn’t impersonate a public official.

What stolen valor groups have done is make it acceptable for these Rangers and others like them to act as self-appointed vigilantes, emboldened to act unprofessionally and unlawfully. They assaulted a stranger on the street and no one objected. In fact, many celebrated their behavior and believed that the man got off lightly. What if they had done more than just slap him in the face a few times? When would their behavior have risen to an unacceptable level?

Valor cannot be claimed and doesn’t need to be defended because it can’t be stolen. Service members and veterans who think they have to defend their valor are likely those who are the least deserving of such praise.

Certainly, by the true definition of the word “valor,” there wasn’t anything valorous in the actions of the three Rangers who slapped a man and made a few snarky side comments about Navy SEALs.