The Case Against Arming All Troops 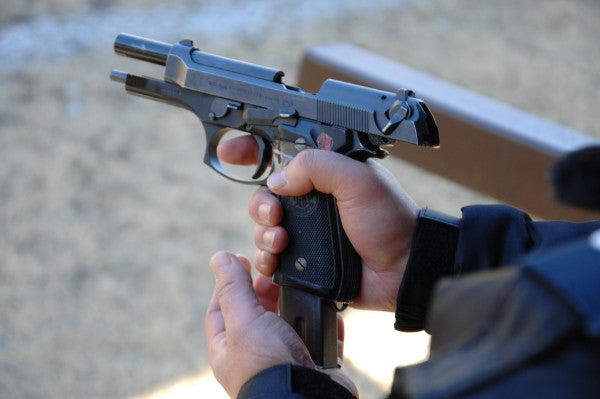 On July 16, Marines Gunnery Sgt. Thomas Sullivan, Lance Cpl. Skip Wells, Staff Sgt. David Wyatt, and Sgt. Carson Holmquist and a Navy Petty Officer 2nd Class Randall Smith were shot and killed by an apparent Muslim extremist, Mohammad Abdulazeez. In the wake of that shooting, many have called for the repeal of the 1992 regulation (issued again in 2011) that prohibits the general arming of military personnel on bases and military installations not in a combat zone. Earlier this week, Chad Russell, a fellow Marine Corps veteran, made a case for this on this website.

The murder of five military servicemen in a cowardly attack has set off the emotions of many Americans. I, myself, am angered and saddened by the loss of my fellow service members. There is also a concern, even a fear, that further attacks on military members who work daily at recruiting and reserve centers could follow. Anger, sadness, and fear are natural reactions to this heinous action. They are not, however, sound foundations for policy.

Emotional arguments and over-generalizations in a rush to arm military members suddenly perceived to be in harm’s way are neither prudent, nor advisable. Russell makes the point that our military is one of the best trained in the world, equipped with a variety of high tech weapon systems. Denying access to an M9 or M4 seems silly in that context. It’s a simple, compelling argument. It’s also incorrect. It conflates “military” with “infantry” or even “combat arms.” It’s an easy mistake to make. As an infantryman, when someone says “Marine Corps,” my thoughts immediately go to my own occupational specialty and experiences. In reality, the infantry makes up a small portion of the armed forces. Mechanics, administrative clerks, food service specialists, intelligence analysts, and others make up the vast bulk of the military. That means they also provide a large portion of recruiters and reserve center staff. Even in the Marine Corps, where “every Marine is a rifleman,” this does not always translate to high proficiency with a rifle, much less a pistol. Running a range, I’ve seen a perfectly skilled admin chief “go unq,” meaning fail to qualify, twice before managing to qualify with the M16. The services have no annual requirement for pistol qualification outside of certain occupational specialties. And annual qualifications alone do not a proficient shooter make.

In his confirmation hearing before the Senate days after the attack, Gen. Mark Milley, the incoming Army Chief of Staff, responded to questions regarding it. He told the committee that the military should look at “hardening” its facilities with passive measures. These would include barriers, bullet-proof glass, etc. He was less enthusiastic about arming military members across the board, saying that it should be looked at and supported where “deemed appropriate”.

Arming military members at recruiting and reserve centers makes sense if they are properly trained and equipped. Military members who are from combat arms, military police, or similar specialties who maintain their weapons qualifications and engage in sustainment of shooting skills should be permitted to provide security at these sites. And the 1992 Pentagon directive would not have to be repealed to allow this to happen. The directive specifically “authorizes DoD personnel to carry firearms while engaged in law enforcement or security duties, protecting personnel, vital Government assets, or guarding prisoners.” The determination that security is needed at these sites by the military service chiefs and the DoD would permit those members with proper training to serve as a security force. This means not only being trained in the use of the weapon, but also in the continuum of force and rules that govern military security forces.

The notion that Marines (and the military) should “be polite, be professional, but have a plan to kill everybody you meet,” said by Marine Gen. James F. Mattis and cited by Russell in his piece was doled out in a specific context, an active combat theater where the threat of insurgency and attack wasn’t just high; it was imminent. It should not be the basis for military posture at home. Recruiters should not “have a plan” to kill everyone they meet the moment they walk in the door. Complacency kills, but the opposite of complacency is not reactionary paranoia. Where appropriate, military members should be properly equipped and trained to provide basic security for themselves and the civilians around them. This doesn’t mean being afraid, or wary, or rushing headlong into arming someone just because they wear a uniform. The consequences of following that route could be just as unfulfilling and potentially damaging.