This week, thousands of men and women in uniform will descend on New York City from May 20 to 26... 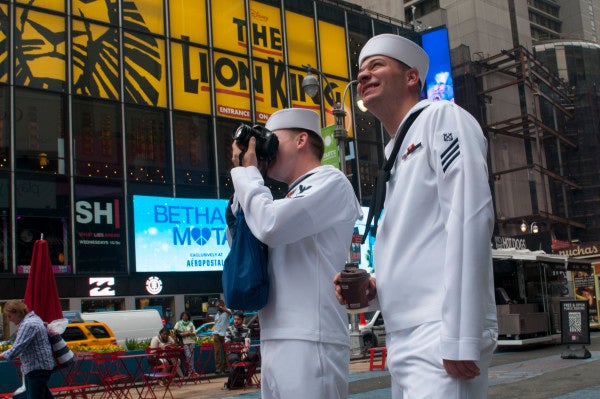 This week, thousands of men and women in uniform will descend on New York City from May 20 to 26 for one of the American military’s largest community relations events — Fleet Week. The event officially stretches back decades, but Navy vessels have visited New York Harbor for decades. This year, six ships will be a part of the official festivities — four Navy ships and two Coast Guard vessels — the USS San Antonio, the USS Barry, the USS Stout, a U.S. Naval Academy Yard Patrol Craft, the USCGC Spencer, and the USCGC Sturgeon Bay.

They’ll deliver thousands of Marines, sailors, and Coast Guardsmen to Manhattan to give tours of their ships, demonstrations of capabilities, performances, and other events. But perhaps more important to building bridges between military and the people of New York, many of these men and women in uniform will check out New York’s vibrant nightlife, and interact with New Yorkers in a much more informal context.

Last year, some of my friends and I went out in the city to explore how service members and the people of New York interacted. I documented the experience in a longform piece on Task & Purpose.

In the interests of helping New Yorkers find Marines and sailors during Fleet Week, this year, I’ve put together an unofficial bar guide to help identify good places for these Marines, sailors, and Coasties; and the New Yorkers who want to hang out with them.

Here are five bars to hit up during fleet week, in order of proximity to New York’s Pier 92, where many of the ships are docked.

Just halfway across the island from the piers lies Johnny Utah’s, a Western-themed bar in Rockefeller Center that boasts the only mechanical bull in New York City. It’s open late (3-4 a.m. except for midnight on Sunday), and is regularly packed with a fun-loving crowd. It’s close to the ships, close to tourist areas Fleet Week service members want to see — Times Square and Rockefeller Center, and going here will leave every option open for the night. You could get dinner and drinks and stay at Johnny Utah’s, take in the sights, go to a different bar, or quickly head downtown — options abound.

A large Irish pub just off of Times Square, O’Lunney’s is a good fit for service members in town for Fleet Week who may be unfamiliar with the city. Have a good, reasonably priced beer, even some decent food, at a place that is near the ships, a stone’s throw from Times Square, and open until 4 a.m.

This place is a neighborhood favorite on the Upper West Side and a generally fun place to hang out. The bar is divey in all the right ways, with a foosball table, a buck hunter video game, and a deceptive amount of space. It’s a little fratty, but that can be hard to separate from the fun, young, crowd there. The biggest drawback for Fleet Week is that while Jake’s Dilemma is surrounded by a few cool venues, on the Upper West Side, you’d be pulled away from a good amount of downtown fun and flexibility.

This sprawling beer hall in the West Village is a regular favorite of a young and attractive crowd. Converted from a former car garage, the atmosphere is outstanding, matched only by the quality and variety in the beer. The food is solid, too. What’s more, if you want a change of scenery, you’re in a vibrant neighborhood in the West Village with a great night life.

The 13th Step has to make the list — this is where my friends and I went last year searching for Fleet Week service members. It’s a fratty bar frequented by bridge and tunnel types, but one that is also consistently packed with young and attractive people. While it’s a solid place to grab a beer and a shot, its real saving grace is its central location downtown, just off of Union Square, surrounded by bars, restaurants, and lots of general activity.