There’s Only One Flag That US Service Members Should Honor

Like many white Southerners, I grew up idolizing Confederate generals like Robert E. Lee, James Longstreet, and George Pickett, and … Continued 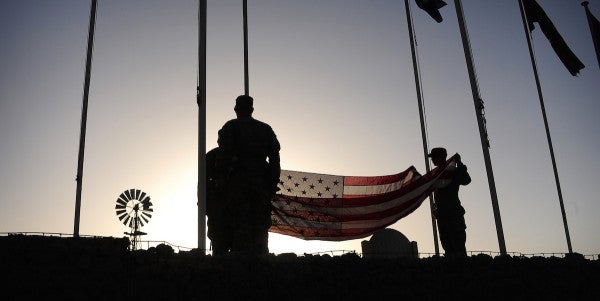 Like many white Southerners, I grew up idolizing Confederate generals like Robert E. Lee, James Longstreet, and George Pickett, and J. E. B. Stuart, and hating Sherman.

My ancestors, the Dixons, fought for the Confederacy. There is ample evidence that at least some of them owned slaves. After the war was over, many continued marauding as outlaws in Texas, where a large contingent of them rode with John Wesley Hardin. It was noted at the time that Hardin’s gang was especially violent in its treatment of Yankees. The Civil War did not end quietly for the Dixons.

I suppose I have as much right as anyone to lay claim to the idea that the Confederate flag is my “heritage.”

But why would I want to?

Just because my forefathers fought for slavery, why would I want to fly the bloody banner under which they fought, particularly since I joined and served honorably in the United States Army, the very Army which they fought against? Why would I choose to “honor” a legacy of hate and repression, and at the same time, wave it away with a claim that I don’t mean anything hateful by it?

Would I accept the same justification from a soldier whose last name was Hess or Bormann or Frick and wanted to fly a swastika?

As a troop commander, I made more than a few soldiers remove the stars and bars from trucks or barracks rooms. None of them ever expressed any guilt for the actions of the Confederacy, because, as they pointed out, it wasn’t as if they’d ever owned slaves or fought to preserve someone else’s right to do so. The next question always seemed to get them: If they don’t feel guilt over something they took no part in, how can they feel pride?

The American flag flew proudly over the government that finally declared the Emancipation Proclamation, that recognized slavery as a historic injustice. That’s the flag that still flies. That’s the flag we should be proud of.

What is the legacy of the Confederate flag that flies off so many cars and trucks in barracks parking lots or hangs in pictures on the walls in offices of officers and noncommissioned officers alike?

What is the legacy of the Confederate flag?

In his farewell address as a United States senator in 1861, Jefferson Davis said that Mississippi “has heard proclaimed the theory that all men are created free and equal, and this made the basis of an attack upon her social institutions” when explaining why Mississippi must leave the Union. The social institution in question was not state’s rights, but slavery.

Alexander Stephens, the vice-president of the Confederacy, was even more blunt: “Our new government is founded upon exactly the opposite idea; its foundations are laid, its corner- stone rests upon the great truth, that the negro is not equal to the white man; that slavery — subordination to the superior race — is his natural and normal condition.”

In a military in which Southerners sweat and bleed and die — men and women of every nationality and ethnicity — in a service culture on which we depend and they us, why would I ever want to stain myself with a flag whose founders declared them to be unequal? How can that possibly be conducive to good order and discipline?

The Army’s values are loyalty, duty, respect, selfless service, honor, integrity, and personal courage. How does a flag founded on the principles of naked, unashamed bigotry and racial injustice comport with those values?

Simply, it does not.

The Confederate flag always was, and still is, about slavery. That bloodstained banner is what it is, and no amount of justification will make it something else.

It is the flag of injustice, and of treason. It is the flag of disunity and discord. It should not be afforded a place of honor, and it should have no appeal to those of us have served or still serve an Army and a country committed to unity.

My fellow Southern soldiers, it is well past time to stop displaying the stars and bars.

When I look back at the history of my family and I want something to honor, I take the example of my grandfather, James Dixon. He was an NCO in the Marines who fought at Iwo Jima. In the late 1940s, he was very active in the Raleigh, North Carolina, chapter of the American Legion. Sometime in the 1950s, a black officer attended a meeting. Whether invited by a member or just because he could, no one has ever been able to figure out. As one might imagine given the climate in the South at the time, the black officer’s reception was hostile.

My grandfather, who by this time was a popular member of the Raleigh Chamber of Commerce, took a stand. He publicly left the meeting, proclaiming that he would have nothing further to do with the American Legion until they learned to pay proper respect to officers, no matter what their color.

Only after the Legion Chapter apologized did my grandfather return.

That’s the military legacy of my family I choose to honor, and I urge all other soldiers who consider themselves the South’s sons to do the same.