Faith and service to country have been a big part of Ricky Dobbs’ life up to this point and the... 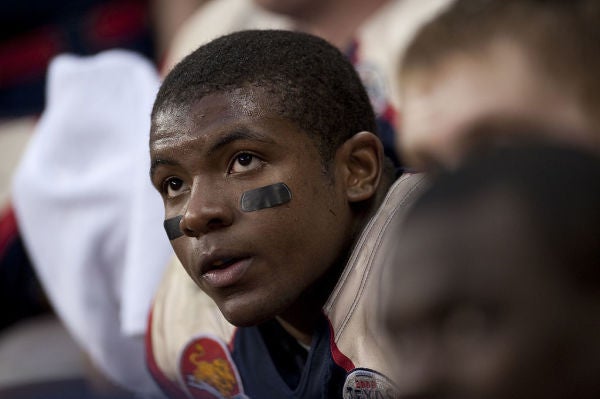 Faith and service to country have been a big part of Ricky Dobbs’ life up to this point and the former star quarterback for Navy knows those two things will be a big part of his future. Growing up in the small town of Douglasville, Georgia, faith was sometimes all he had.

Dobbs’ parents were divorced by the time he was 2 years old. Ricky’s mother struggled with drug addiction while his father focused on raising a separate family. When his mother wasn’t around, Ricky’s parenting was left to a rotating assortment of relatives who did their best to manage the outgoing personality of the enthusiastic youngster. While his upbringing was certainly a roller coaster, his faith was a steadying influence throughout his childhood.

As an eighth grader, Ricky’s faith was tested when his mother had the first of five heart attacks. Barbara Cobb went on to suffer four more cardiac arrests over the next six years, two that required her to be revived by medical personnel after flat lining. To say it was a trying time for the then teenager is an understatement.

“I needed to be strong and let her know that she shouldn’t worry about us at home,” Dobbs told Task & Purpose in a phone interview. “I knew that to persevere, I would have to put my faith in God.”

Fortunately for Dobbs and his family, that faith has allowed Barbara to make a full recovery and she is currently doing well.

When he arrived at the U.S. Naval Academy in 2007, Dobbs quickly understood he was someplace where you become part of something bigger than yourself. Playing quarterback for Navy was his entry into a career of service, but the hook was the opportunity to influence and lead those around him.

“People believe in Ricky, and a lot of it is the way he carries himself,” Navy Head Coach Ken Niumatalolo said in a 2010 Washington Post interview. “He's a person of strong faith, and I think he believes that he can accomplish anything. It rubs off on other guys. … If you don't like Ricky Dobbs, something is wrong with you.”

Dobbs’ career at Navy was nothing short of spectacular. A pre-season Heisman candidate in 2010, Dobbs ran for 2,654 yards and 49 touchdowns in less than three years of starting as an option quarterback for the Midshipmen. Additionally, he passed for 2,770 yards and threw another 20 touchdowns total. In 2009, Dobbs set the record for most rushing touchdowns in a season, 27, only to be eclipsed by his protégé, current Navy quarterback Keenan Reynolds.

Dobbs led the 2009 Navy team to a 10-4 campaign (tied for the best in school history) with victories over Army, Notre Dame, and Missouri in the Texas Bowl, where he was named the game’s most valuable player. He finished his college career with a strong showing at the East West Shrine invitational game, but as with all service academy athletes, he knew he had a service commitment to satisfy; the NFL would have to wait.

Undeterred at the possibility that he might lose his chance to fulfill a lifelong dream to play professional football, Dobbs approached his naval service with the same enthusiasm he exudes on the gridiron, all while continuing to hone his football skills on his own time.

Serving as a surface warfare officer on the USS Oscar Austin, Dobbs managed to play two seasons as quarterback for the Virginia Cyclones, a semi-professional team out of Norfolk, Virginia, while making a deployment to the coast of Somalia during the same tour. He is currently in Bahrain on his second sea tour, serving on the USS Sirocco , a Cyclone-class patrol ship conducting maritime security operations in the Persian Gulf. On the Sirocco, he has held high-profile jobs such as operations officer and navigator.

“I am currently enjoying my jobs and Bahrain as a whole, but I am looking forward to my next career move,” Dobbs told Military Times in 2014.

Dobbs admits that preparing for a chance at the NFL while still on active duty has been difficult. He knows he is at a training disadvantage simply because of Sirocco’s operational tempo.

U.S. Naval Academy Midshipman quarterback Ricky Dobbs pitches the ball to running back Andre Byrd during the 2009 Texas Bowl college football game against the University of Missouri at Reliant Stadium.

“We are regularly out to sea 15-20 days a month,” observed Dobbs. “I try and maintain my cardiovascular fitness and lift, while managing to do some throwing with friends who serve as wide receivers during flag football games when we are ashore.”

“I know the odds are against me, but that is no reason not to try.”

The Navy has made few exceptions during the past 14 years with regard to letting newly commissioned officers serve while also playing a professional sport. Joe Cardona of the New England Patriots is currently the only active-duty Navy member currently serving while playing. Cardona’s dual commitment as the Patriots’ long snapper on Sundays and as a Naval Academy Preparatory School duty officer on weekdays has been quite extraordinary. However, coming back to the professional sporting ranks after completing a full-service commitment is not out of the question.

Current professional golfer and 2004 Navy graduate Billy Hurley III managed to make it on the PGA tour after finishing a five-year stint as a surface warfare officer. Current St. Louis Cardinals pitcher Mitch Harris served active-duty tours on the USS Ponce and USS Carr and is the first Naval Academy graduate to play Major League Baseball since Nemo Gaines in 1921.

The bottom line is Dobbs knows playing at the professional level after serving can be done because he has seen other Naval Academy graduates do it.

Now, in late 2015, Dobbs is ready to take on the NFL. He has secured representation through the Doyle Management Group based out of Atlanta, Georgia, and is taking his final set of orders next spring to head back to the U.S. Naval Academy, the place where his faith and service to country first became intertwined.

If faith and service to his country have gotten him this far, what could stop him?