This Is How The Navy Responds When A Submarine Disappears

The loss of the ARA San Juanstunned the international submarine community. It was the first sub lost since Russia’s nuclear-powered... 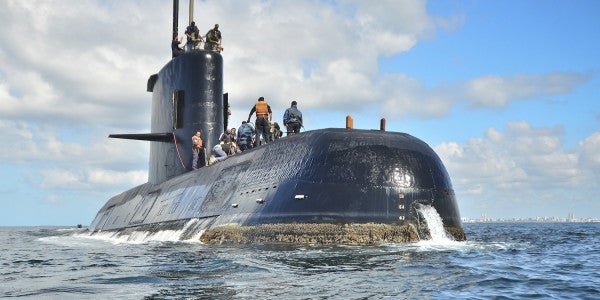 The loss of the ARA San Juanstunned the international submarine community. It was the first sub lost since Russia’s nuclear-powered Kursk went down in 2000, and it demonstrated the rare international unity and cooperation that occurs when a boat is in distress. At least 13 countries participated in the search for the diesel-electric San Juan — helping the Argentines look for what is now a tomb for 44 submariners who’d gone out for a routine peacetime patrol. Every accident is tragic, and every one offers lessons — lessons that can help captains and crews and engineers avoid the next one, or survive it. The U.S. Navy places great emphasis on submarine rescue, and though their services are rarely utilized, the men and women of the Undersea Rescue Command, based in San Diego, stand ready 24 hours a day to respond to crises.

RELATED: How The US Snatched A Sunken Soviet Submarine From The Depths Of The North Pacific»

Until a few weeks ago, Cmdr. Mark Hazenberg, was commander of that unit. He spoke to us about the Navy’s rescue capabilities.

We tend to think about submarine accidents as being catastrophic and unsurvivable. Is that overly pessimistic?

It’s hard to speculate whether or not they’re survivable. Every one is different. What we have in U.S. history is the USS Squalus, which sank off the coast of New England in May of 1939. The U.S. Navy submarine rescue force rescued 33 people off that submarine — way back in 1939. Since then we have continued to develop and have a submarine rescue program that can handle any and all calls for rescue.

Ed note: The Squalus sank during a test dive with 59 men aboard after a valve failure caused water to flood into several chambers, resulting in the drowning deaths of 26 men. Rapid response by the crew enabled the remaining men to survive aboard the crippled vessel, which came to a rest on the seafloor, 243 feet down. The sub was quickly located and, 40 hours later, the last of the 33 survivors was carried to the surface inside a diving bell known as the McCann Rescue Chamber, designed specifically for this purpose. Four Navy divers received a Medal of Honor for their roles in the rescue and the sub itself was later salvaged, refit, and put back into service as the USS Sailfish.

There hasn’t been a submarine lost anywhere in the world since the Kursk, in 2000. And historically, most accidents have not been survivable, but you have to prepare as if they are, right?

Accidents don’t happen that often; however, there is always a risk that they can occur, and they can occur in water where the people onboard can survive and need rescue. That’s why we actively train to make sure our rescue operators and equipment are proficient and ready at all times.

I know that any submarine that exceeds its crush depth is a catastrophic loss, but how much time does a sub that’s merely crippled have? How long could a crew survive sitting in, say, 500 feet of water?

A U.S. submarine has the ability, under normal circumstances, to replenish the air and water supplies indefinitely. They carry weeks of extra provisions to support extended at sea operations. But any equipment problem that would prevent the submarine from being able to surface would be a very serious matter and we base our search and rescue plans on conservative estimates regarding the submarine’s life support systems. The life support assumptions take into consideration having little or no electrical power, and the inability to replenish the atmosphere. Emergency stores onboard do provide material to support atmospheres but for a limited time. I can’t provide an exact number, but I can say that our plans are based on the need to mobilize and respond rapidly to the affected submarine’s last known location.

Where is the U.S. Navy Undersea Rescue Command based?

We are located on Naval Air Station North Island, in San Diego. This is the U.S. Navy’s only submarine rescue organization; however, we are very mobile and strategically located near an airport, so that we can have a global response regardless of where the accident occurs.

The unit is currently deployed in South America, assisting in the search for the ARA San Juan. How quickly did you respond?

When we received notification and a request from the Argentine government, we were immediately mobilizing and moving to load all of our equipment on planes. Twenty-four hours later, we were in the air. [Ed note: Argentina announced that the sub was lost on Friday, Nov. 17; the URC was called upon the next day.]

We always train to be able to disassemble and pack equipment as soon as possible, and to be able to load in as soon as the first plane arrives. The moment that happens, our foot is on the accelerator. Also we engage with the international community and other countries’ rescue organizations, such that we can foster relationships to gain experience and share lessons learned, and such that if for whatever reason we might not be able to respond right away, someone closer might be able to get there faster.

What does the URC response entail?

Our submarine rescue consists of three separate systems. We have a deep water rescue system, which is our diving recompression system. It’s called the Pressurized Rescue Module, or PRM. We also have a shallow water rescue system, called the Submarine Rescue Chamber, or SRC. And there’s an intervention system, a remotely operated vehicle, or ROV. It’s used to pave the way for the rescue systems. The ROV is employed at the sub site and it would go down, conduct a detailed survey and inspection of that submarine, clear away any debris that might be on the sub’s rescue hatch, and also in some cases connect up some supporting gear to allow us to start our rescue.

Can you break each system down in a little more detail?

The shallow water system, the SRC, can operate to 850 feet. It looks like a diving bell. It can hold eight people — two operators and six rescuees. You lower it to the submarine on a cable from a surface vessel, mate with the sub’s hatch, open the hatch, and get people out. It’s an older design based on the original McCann Rescue Chamber used back in 1939 to rescue those men on the Squalus. It’s a very robust design, easily deployed, and very reliable.

The deep water rescue system — the pressurized rescue module — is basically an ROV operated by control systems on the surface vessel, with a large compartment to hold up to 18 personnel — two internal attendants and 16 rescuees. The PRM can reach all the way down to 2,000 feet, and it has a unique feature associated with how it connects. There’s a transfer skirt that can rotate and mate with a submarine that might be lying at an angle up to 45 degrees. The skirt mates with the sub while keeping the PRM upright, allowing for easy access.

So in both cases, you have to make several trips down and back to rescue an entire crew?

Yes. You go through a cycle where both vehicles would go down, mate with the submarine, fill up the vehicle with rescuees, bring it back up, get them off, and dive back down. Depending on the depth of the submarine, it could take up to a couple hours of cycle time, from diving the vehicle to returning to the surface.

If both the submarine and the rescue chamber are pressurized, are you still worried about decompression?

The PRM is designed such that if they are in pressurized environment, they can transfer into the pressure module and safely be brought up and transferred into one of two decompression chambers on the surface vessel. Each one of those can hold up to 33 people, 31 of whom are rescuees.

Whether or not decompression is a risk depends on the situation of the sub, on whether or not those people on the submarine were exposed to a pressure equal or close to equal the sea pressure at that depth, and how long they’ve been there. Many factors are involved.

We have navy divers on the unit who are skilled in operating our equipment, and as a standard discipline U.S. Navy divers are educated in the effects of decompression sickness and methods and actions to take to reduce the risk.

Can you use basically any available surface vessel to deploy to a site?

Our equipment is designed to work on a majority of commercial vessels that could be found in the maritime shipping industry. We’ve done that to open the aperture to allow us to get a vessel as quickly as possible that would be closest to the airport that we would fly into — the one closest to the seaport near the site. The whole point is mobility and rapid response. That is one of the things that our equipment is designed for.

Ed Note: In the case of the ARA San Juan search, the URC deployed on the Norwegian oil and gas support ship SkandiPatagonia, based in Brazil.

The international community for submarine rescue is a close community. We get together at least twice a year to interact and share lessons to develop our knowledge base through an organization known as the International Submarine Escape and Rescue Liaison Office (ISMERLO), which is based in the United Kingdom.

That office was formed shortly after the loss of the Kursk. What did we learn from that tragedy?

Since the Kursk event precedes when I got into this job I can’t speak to what was gained. But it does reinforce the importance of getting together as an international community to share lessons learned.

Ed Note: Debate continues over the Kursk story, and whether or not some of the Russian submariners could have been saved had the Russians asked for help sooner. Both the English and Norwegian navies offered immediate assistance and were turned down. An inquiry found that the majority of the 118-man crew was likely killed in the immediate aftermath of an explosion that caused the sinking, but 24 bodies were later found in a sealed compartment, along with a note from an officer listing the names of 23 men who, along with himself, survived the initial disaster.

There are currently 41 countries operating submarines, and 15 that have “global rescue systems,” according to ISMERLO. To learn more about the U.S. Navy Undersea Rescue Command, visit their website.

Josh Dean is a journalist and author based in Brooklyn, N.Y. He contributes regularly to many national magazines, including Popular Science, GQ, Bloomberg BusinessWeek, and Outside, where he is currently a Correspondent. His latest book is “The Taking of K-129: How the CIA Used Howard Hughes to Steal a Russian Sub in the Most Daring Covert Operation in History.”