It’s Been 10 Years Since Travis Manion Gave His Life, But He Is Still Very Much Alive

It’s been 10 years. Really, 10 years. I remember very shortly after we lost Travis I attended a seminar with … Continued 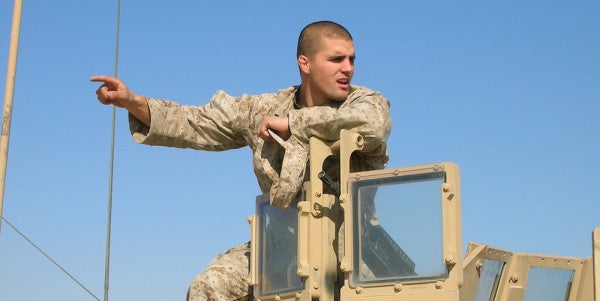 I remember very shortly after we lost Travis I attended a seminar with other Gold Star families and I met a girl who was close in age to me. She asked me about my loss and I shared with her that my brother had been killed in Iraq six months prior. She shared with me that she too had lost her brother. Ten years ago…

My feeling when she told me this was that there was no way we could relate to each other. How could she possibly understand what I was going through? My pain was still so fresh. Her loss that had taken place a decade ago made me wonder why she was even at this event. In 10 years, would I still be grieving? In 10 years, would I remember the sound of my brother’s voice? Ten years seemed a lifetime away.

Ten years is now here and those questions now have answers. Do I still grieve? Yes, but in a different way. Do I remember the sound of his voice? I could never forget it.

When Travis was killed on April 29, 2007, my oldest daughter Maggie was 10 months old. For the first few weeks after his loss, I was incapable of taking care of her. I will never forget just minutes after we received that knock on the door looking into her eyes while my aunt held her and hysteria ensued all around. All I could think was that she would never get to know the greatest guy in the whole entire world.

What I couldn’t have imagined is that not only would she and my other kids get to know Travis in a very special way, but that thousands and thousands of people across the world would get to know him too. I know the indelible impact my brother made on me in just 26 years, but to see the impact he left and still continues to leave on others is perhaps the most incredible thing I have ever witnessed.

I often wonder what Travis would think about the Travis Manion Foundation. I know that he would be serving right beside me if still here, but I also know that because of his humble nature he would not approve of a foundation in his name. What I would say to him is that it’s actually not about him; his name represents all of our brave fallen heroes of this post-9/11 generation. His name is a way for those disconnected from the military community to understand the service and sacrifice through his story. His name is a reflection of all that is great about this country.

Last week, I spoke at an event to honor Gold Star families along with Missouri Gov. Eric Greitens, who served with Travis in Iraq. He said something very poignant in his remarks.

“We didn’t love our fallen brethren as heroes, we love them as people. Let’s still keep them alive as people. Now if we do that then we can remember that we — as imperfect as we are — we have the possibility of being heroic ourselves. And that’s how they would have wanted it.”

My brother receives the designated “hero” status a lot. High schools and colleges have named wrestling awards and scholarships after him. The Marine Corps named a building after him. But I want everyone to know the way that he lived each and every day leading up to that last day. Travis was a real person, with real flaws and imperfections. He made mistakes as we all do.

But Travis was special. He dreamed big. He knew the person he wanted to be and he worked hard to become it. From a young age, he was big in the little things. And as he got older, he was prepared to be big in the big things.

Even as a young child I admired the way he lived his life. I was in awe of his determination and strong work ethic. I was never in competition with Travis. I was perfectly happy to cheer him on watching all of his accomplishments along with the rest of my family.

After his death I took stock in my own life. Who was I as an individual? With him no longer here, who was going to continue to make my parents proud?

When Eric spoke those words last week, they hit me hard. They made me realize that Travis’ loss has made me the best version of myself. In his death, he has pushed me further than I ever thought possible. I wake up every single day acutely aware of the opportunity I have to walk this earth.

Early after Travis’ loss, my parents and I sat down with a heart surgeon who just wanted to thank us for Travis’ sacrifice. He shared with us this saying, “Do you not know that a man is not dead while his name is still spoken?”

Yes, it has been 10 years since my brother gave his life in Iraq. But he is very much alive. And he will continue to live as long as his legacy continues to inspire others to be the best version of themselves.