The military’s Family Subsistence Supplemental Allowance, or FSSA, sounds like a good deal. It certainly briefs well: extra money in... 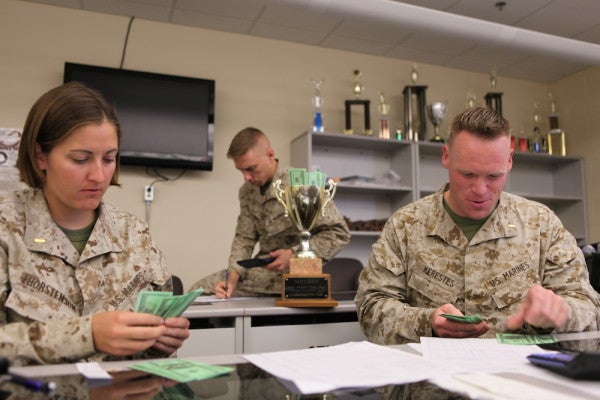 The military’s Family Subsistence Supplemental Allowance, or FSSA, sounds like a good deal. It certainly briefs well: extra money in the pockets of our lowest income military families. Who doesn’t want that?

FSSA began during the Clinton administration. A congressional pet project, the goal of FSSA was to reverse a sobering trend: 25,000 military families on food stamps.

There are still more than 20,000 military families on food stamps nearly 20 years later. That’s according to census data cited in the Military Compensation and Retirement Commission Report, released Thursday, Jan 29.

This is despite years of steady basic pay increases, hefty enlistment, and reenlistment bonuses, and increases in housing and other allowances.

This is despite FSSA, which only helped about 285 military families, or 0.02% of the total force, in fiscal year 2013, according to the report.

FSSA has failed because it examines the military family financial issue as an absolute. Using the raw numbers of income and size of household, either a military family has enough money to survive, or it does not. Those above the threshold simply do not qualify, and receive no benefit.

Michelle Villarreal Zook proposed in an article for Task and Purpose that the fix is to expand FSSA. Citing a report by a non-profit, expansions would include adopting enrollment for all qualifying service members and excluding housing allowance from income calculations.

This equates to a de facto raise for our troops, which is certainly not a bad idea, but let’s call it what it is, and ask for it by name.

I’ll say it now: Our troops deserve a raise. There is no such thing as an overpaid soldier, sailor, Marine, or airman.

But this isn’t about basic pay raises, and expanding FSSA misses the point of the commission report, which is to seek efficiencies, improve sustainability of the armed forces, and better equip our troops financially.

Propping up or expanding a program like FSSA doesn’t help our military win the battle against debt. To win that battle, like all battles, our troops deserve the best training and strong leadership.

Many military families are young. The average age of a married enlisted service member is about seven years younger than the average married officer. More than half of all spouses of active duty are under 30, and about half of the most junior troops — E4 and below — with any kind of dependent family, have kids.

These are not bad things. For a young man or woman with only a high school diploma, the military provides income, housing, and health insurance benefits that have virtually no parallel in the civilian sector.

These benefits provide our troops much more financial stability and mobility than a typical blue-collar employee or an undergraduate college student living on scholarships, loans, and grants may have. And our troops deserve this stability.

But when it comes to financial knowledge, junior enlisted service members aren’t much different than any other 22-year-old. Like undergraduate freshmen and sophomores, they still have yet to learn tough financial lessons on budgeting and saving, and with a steady income, they face the added threat of predatory lending, seemingly easy credit, and unscrupulous car dealerships.

Kim Leone served as a Marine for more than 15 years, and was stationed in San Diego when she began her family. She and her husband decided he would stay home with their son, making them a single-income family. But with her basic pay, housing and other allowance, it appeared the family had plenty of cash, equivalent to nearly $5,000 a month at 2015 pay and allowance rates.

“It looked like we could afford new baby clothes, a new television, a new car,” she told Task & Purpose in an interview. “On the 1st and 15th we could, but that short-sighted thinking would have quickly landed us in debt.”

Leone and her husband lived on a corporal’s salary in a city with one of the highest costs of living in the United States, but they made it work. How?

“We didn’t eat out. We didn’t go to movies. We had one computer. We drove the cars we had because they were paid for,” she said. “We prioritized because we knew we didn’t want to be in debt.”

The couple decided to stop spending and start saving. She researched financial advice, and learned about compounding interest, loans, and investments.

“Things like credit scores and debt-to-income ratio start to matter pretty quickly,” she said. “We found ourselves, even with just a corporal’s paycheck, saving as much or more as our parents were able to when we were growing up.”

But Leone is the exception, not the norm. She improved her family’s financial position because she did extensive research on her own. She learned from experts beyond the military, because the military couldn’t and didn’t help her.

So, justifiably, the commission advocates for completely revamping how our military men and women learn about money.

“Weaknesses in financial literacy are adversely affecting Service members and their families,” the report states. “Current training programs could be better tailored to the behaviors of today’s service members. Financial education should be provided to service members to develop a culture of personal financial responsibility. Training should contain real-world, practical lessons packaged to engage the youngest cohort of Service members.”

When does the commission say military members should receive this new, adequate financial training?

And you know what? That’s not enough.

In addition to providing sound, competent financial counseling for our military men and women, it should be provided for their families as well. Furthermore, we should make every effort to eliminate the scourge of “payday loans” and other forms of predatory lending, and continue to improve the Servicemember Civil Relief Act to not only reduce interest rates of old debts, but help prevent high rates in new debts as well.

And unlike greatly expanding FSSA, which would come at an untold cost, better financial training pays, at least in part, for itself.

“DoD estimated it would save between $13 million and $137 million annually by providing Service members and their families more protection against high-cost debt, consequently reducing the number of troops involuntarily separated because of financial problems,” the Commission’s report notes.

Greatly expanding financial education for our troops helps to give them the training they need to win financial battles, but just like any battle, they should not go alone.

As an noncommissioned officer, I helped one of my Marines, let’s call her Sarah, shop for her first car. She had some fairly substantial savings: about $10,000 due to an inheritance.

Sarah knew the car she wanted, but at $15,000, it was more than she had saved. No problem, the dealer told her, we can finance the rest.

The dealership ran Sarah’s credit and told her she could drive away that day with $10,000 down and a monthly payment of about $150, payable over five years.

Sarah was single, lived in the barracks, and didn’t think $150 a month would have a huge impact.

Then I stepped in. I explained to Sarah that $150 may not seem like much, but it meant she would pay nearly $20,000 for a $15,000 car. Almost a quarter of the cost would go to interest. That’s not to mention, five years would be a long time, two years beyond her current enlistment. What if she decided to start a family, what would she do as her life changed?

Sarah’s mind changed, and she decided to instead buy a car she could afford using her savings alone. She laughed at the salesman as we left.

That kind of leadership isn’t commendable or exceptional. It is and should be expected, and I believe nearly any officer or noncommissioned officer would do the same.

But military families are a different challenge than troops in the barracks. Military families often live off base, and even those living in base housing can be harder to reach.

Military families are, in my experience, less reliant and therefore less trusting of leadership in making life decisions, especially those regarding money. Leadership is simply not as involved in the lives of our troops with families.

This lack of involvement in the lives of our young military families is a failure of leadership, and officers or noncommissioned officers should provide, at minimum, the same level of counsel for military families as they do for single service members.

These programs offer a safety net for millions of Americans, military or otherwise, and are the standard for ensuring nutritional food is available for those in need. They also virtually guarantee that the associated benefit is used only for food.

Incidentally, SNAP often provides more help than FSSA. The commission found that a service member qualifying for both the federal nutrition assistance program and military version would receive more than double the benefit through the federal version. The Supplemental Nutrition Assistance Program is also managed at the state level, naturally adjusting for regions with higher cost of living.

“FSSA is duplicative and, in many cases, less generous than SNAP, which is a much broader Federal program that successfully addresses the same goal of nutritional assistance,” states the commission report.

FSSA was put in place due to a perceived stigma surrounding food stamps in the late 1990s; however, in theory it is fundamentally no different than its federal counterpart.

FSSA would seem to hold an advantage in that military families need not reapply for benefits if they move from one state to another. But for that to matter, an application would first have to be approved, and nearly 97% of all FSSA packages are denied, according to the report.

When the goal is to ensure military families in need have nutritional food, we shouldn’t care whether the program is called FSSA or SNAP or food stamps, so long as it is the best program available. Today, military families still choose SNAP over FSSA at an estimated rate of 100 to 1. As those families already use SNAP, they should be allowed to continue to use it, not jump through bureaucratic hoops in the name of semantics.

But the reality is most military families don’t qualify for FSSA or SNAP. Their incomes are simply too high. That doesn’t mean they don’t face financial hurdles, they do, just as so many other young families. It does mean; however, this is an issue that can’t be solved with money alone.

Ending a program like FSSA that benefits few, but in no way helps the majority of military families, makes sense. All of our military members and their families deserve financial responsibility security during their service. Beginning a new, stronger financial education system and providing the same leadership to our troops at home as they’ve received through deployments is the right way to help our military and their families today, and for their futures.