Troops Turned Out In Smaller Numbers For The 2016 Presidential Vote. Here’s Why 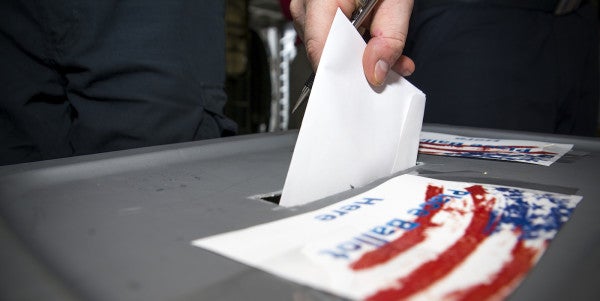 Voting rates dropped from 58 percent in 2012 to just 46 percent in 2016 among servicemembers, says the Federal Voting Assistance Program report, released earlier this month.

“A striking finding from our analyses is the reported drop in participation rate among military personnel in the 2016 election as compared to the general population,” FVAP program director David Beirne said in a report to Congress.

“The data shows that more military members cited motivation-related reasons for not voting and were less interested in the election in 2016 than in 2012,” he added.

The FVAP report estimates that 75 percent of the civilian population voted, though that figure is much higher than most estimates, including a Census Bureau survey showing that 61.4 percent of registered voters reported voting.

Michael McDonald, a University of Florida professor who runs the United States Elections Project website, estimates that about 58 percent of eligible voters cast ballots in 2016, compared with 58.6 percent in 2012.

The main factors for whether a person votes are interest in the election, conviction that the voter’s choice matters and “if they see an important difference between the candidates and their policies,” McDonald told Stars and Stripes before last year’s election.

But even a sample of civilian voters with similar demographics to the active-duty military voted at a 6 percent higher rate, the FVAP survey found.

All the reasons for the military voting decline aren’t known, said Katherine Roddy, a spokeswoman for FVAP, which is mandated to assist absentee military voters.

“Between 2012 and 2016, the (active-duty military) population became less male, white, college educated, and married,” she said in an email. “Voting research has shown that white, married, and college educated individuals are all more likely to vote.”

Difficulties inherent in absentee voting — registering, requesting and mailing ballots — were not considered a factor in the drop.

“The data indicate that voting assistance improved in 2016 — which would suggest there has not been an increase in obstacles,” Roddy said.

Registration and participation rates among active-duty women and minorities dropped considerably in 2016.

And while registration rates for whites dropped 8 percent, they dropped 18 percent for blacks.

That drop was unique to the military, the report said. Civilian “registration and participation rates did not vary as much by gender or racial group,” the report says.

The FVAP survey was administered to nearly 7,000 people from the day after the election in November through January.

Servicemembers living in states with congressional and gubernatorial contests in 2017 can either contact their local elections office or visit fvap.gov for information on registration and obtaining ballots.