UNSUNG HEROES: The 2nd Lieutenant Who Was Shot In Iraq, But Refused To Go Down

Eight years ago, Walter B. Jackson was a newly minted officer in the U.S. Army, fresh out of West Point,... 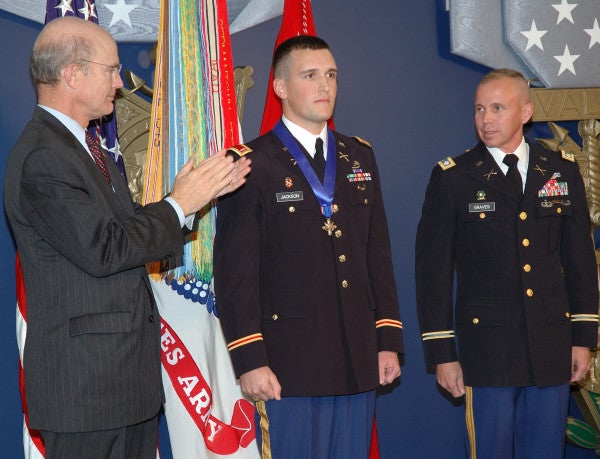 Eight years ago, Walter B. Jackson was a newly minted officer in the U.S. Army, fresh out of West Point, serving as the fire support officer for Company A, Task Force 1st Battalion, 36th Infantry Regiment in Anbar province, Iraq.

Jackson was attempting to recover a disabled vehicle when he and his men took heavy machine gun fire. Several members of his unit were immediately shot. In providing first aid to a downed soldier, Jackson was shot in the thigh, according to military reports.

I’ll let his award citation tell the rest of the story:

“Upon regaining consciousness after being shot, second lieutenant alternated between returning fire and administering first aid to the Soldier. Second Lt. Jackson was hit again with machine gun fire as he helped carry his wounded comrade to safety, but he never faltered in his aid. Although his own severe wounds required immediate evacuation and surgical care, 2nd Lt. Jackson refused medical assistance until his wounded comrade could be treated. Second Lt. Jackson's selfless courage under extreme enemy fire was essential to saving another Soldier's life and is in keeping with the finest traditions of military service…”

For his actions that day, Jackson received the Distinguished Service Cross, the Army’s second highest award for valor in combat, behind only the Medal of Honor.

At the time, he was just the seventh soldier since 1975 to receive the award. He was presented the medal by the then-Secretary of the Army, Pete Geren, and Jackson’s commander of Task Force 1st Battalion in Iraq, Lt. Col. Thomas C. Graves.

At the ceremony in 2007, Graves spoke about how throughout the process, Jackson expressed greater concern for his fellow fallen soldiers than his own welfare.

“All the leadership schools, classes and years of experience never really prepare you for that moment in time when you are standing among heroes who have given their all, where their first concerns still remain with their fellow Soldiers,” Graves said. “It reinforces duty and commitment unlike any other experience.”

With severe wounds, Jackson endured more than 12 surgeries as part of his recovery period. He didn’t rest, though, volunteering to intern with the judge advocate general’s office during his recovery.