UNSUNG HEROES: The Airman Who Fought For 6 Hours To Rescue Downed Soldiers

Airmen don’t get a ton of credit for their exploits in Iraq and Afghanistan, but more than 20 airmen have … Continued 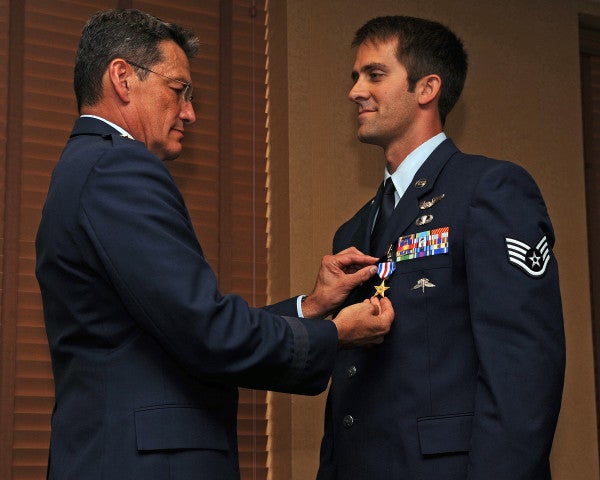 Airmen don’t get a ton of credit for their exploits in Iraq and Afghanistan, but more than 20 airmen have received the Silver Star Medal, the nation’s third-highest award for gallantry in combat, for their actions in the Global War on Terror.

One of these men is Air Force Staff Sgt. Zachary Kline, a pararescueman with the 306th Rescue Squadron, who received the award roughly a year ago.

Kline received the medal for actions in Afghanistan in April 2011, when an OH-58D Kiowa Warrior helicopter crash-landed in Kapisa province. One pilot was killed and another was wounded, the Associated Press reported at the time.

American assets were reportedly dispatched within 10 minutes to rescue the downed soldiers.

They immediately came under fire from insurgents. Kline was a part of that team. What followed was a daring rescue mission in the midst of a six-hour onslaught from multiple positions. According to a military report, Kline engaged targets from the ground, and also directed airstrikes against targets attempting to outflank his position.

At one point, the military report states, enemy fire ignited fuel near the wreckage, erupting the scene in flames. Kline reportedly “continued to push through enemy fire to an alternate site while still guiding overhead aircraft to adversarial positions by radio.”