UNSUNG HEROES: The Army Sniper Who Created A One-Man Defensive Wall In Front Of The Taliban

Editor’s note: Unsung Heroes is an effort by Task & Purpose to highlight the stories of bravery and heroism that... 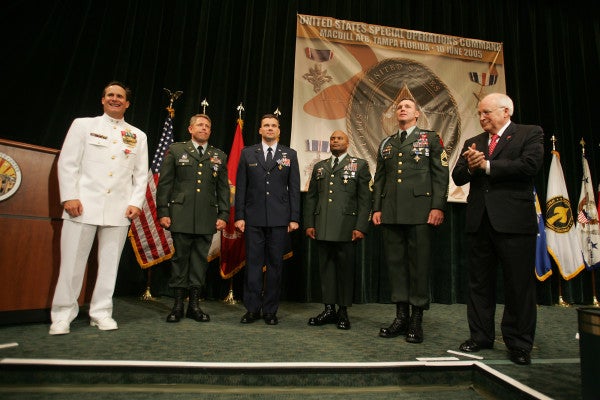 Almost exactly 10 years ago, a sergeant first class was on a helicopter on a special forces mission over northeastern Afghanistan. His job? To engage the enemy from the air to provide cover for coalition ground forces.

The soldier, Stephan Johns, was in the last helicopter of the group. The aircraft was hit by enemy fire and was forced to briefly land in hostile territory.

But according to his Silver Star citation, Johns did not abandon his mission, he “jumped out to set up a one-man defensive wall between a group of enemy fighters and the main American assault group.”

Alone on the ground for more than 30 minutes, Johns was repeatedly rushed by al Qaeda and Taliban fighters. That enemy endeavor left nine insurgents dead at the hand of Johns’ rifle before Johns was picked up by another helicopter.

He received the Silver Star, the military’s third highest award for valor. Then-Vice President Dick Cheney presented him the award at a ceremony in 2005 at MacDill Air Force Base, Florida, home of U.S. Special Operations Command.

On the unique skill of the military’s special operations community, Cheney said, “I see regular evidence of your unparalleled skill, your ingenuity and your daring. Every single day SOCOM confirms its reputation as a small command that produces big results for the United States of America.”

Do you know a story of remarkable courage or heroism from a member of the armed forces after 9/11? Hit us up at editor@hirepurpo.se and let us know.