UNSUNG HEROES: The Holocaust Survivor Who Earned The Medal Of Honor For His Conduct As A POW

We usually reserve our weekly Unsung Heroes post for actions of bravery after Sept. 11, 2001, as an effort to... 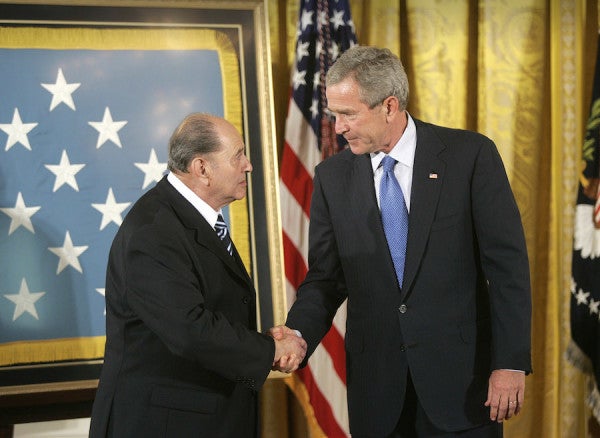 We usually reserve our weekly Unsung Heroes post for actions of bravery after Sept. 11, 2001, as an effort to herald the extraordinary stories heroism found in a new great generation of American veterans.

But this week we wanted to do something different. We wanted to recognize a story of gallantry and heroism that for far too long went officially unacknowledged. This is the story of Tibor Rubin.

Rubin received the Medal of Honor from President George W. Bush nine years ago this week. But his heroism took 55 years to be recognized for his bravery.

Rubin was born in Hungary in the daybreak of upheaval in 1929. At 13 years old, he found himself in a Nazi concentration camp. Once the camp was liberated by U.S. soldiers, Rubin immigrated to the United States and joined the U.S. Army.

“I was going to go to the U.S. and join the U.S. Army to show my appreciation. … It was my wish to fight alongside them,” Rubin said in a 2005 interview with the Washington Post.

That’s how, in 1950, Rubin found himself as a private first class in 8th Cavalry Regiment, 1st Cavalry Division, fighting in Korea.

With a platoon sergeant who was reportedly an anti-Semite, Rubin was often forced to take on the most dangerous missions.

On Oct. 30, 1950, he manned a .30-caliber machine gun against a brutal Chinese assault. After hours of fighting, the Chinese captured a severely wounded him, according to his Medal of Honor citation. The Chinese tried to release Rubin to return to his native Hungary, but he refused, wanting to stay with his American comrades.

Once in a North Korean POW camp run by his captors, Rubin disregarded his own personal safety and used his experience as a Holocaust survivor to feed his fellow starving prisoners. He would sneak out at night, break into storerooms, and return with food for his soldiers.

“It wasn't easy on them. For someone that young, it's a nightmare. But I had been through it once, and that's why I came through and helped them,” Rubin said.

He remained a POW for 30 months.

As a result of his selfless actions, Rubin was credited with saving the lives of as many as 40 other prisoners.

Upon awarding Rubin the Medal Honor, President Bush referred to him as “one of the greatest Jewish soldiers America has ever known.”