UNSUNG HEROES: The Private Who Burned His Hands To Save His Fallen Brothers

His hands were burning. His weapon’s hand guards had been blown off during the explosion, and the bare metal was... 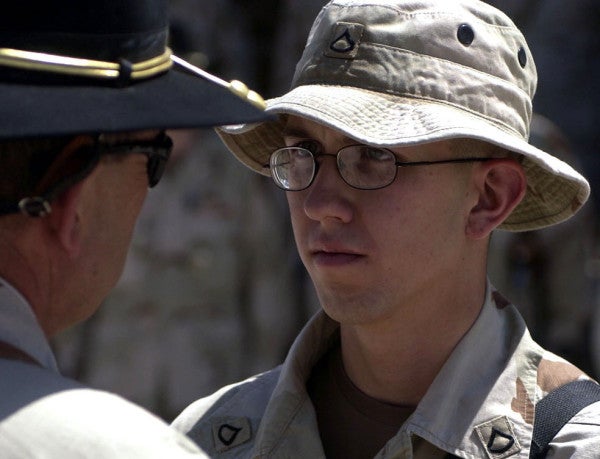 His hands were burning. His weapon’s hand guards had been blown off during the explosion, and the bare metal was searing his skin. Yet 18-year-old Christopher Fernandez didn’t let go. He knew the suppressive fire provided by this machine gun was the only thing giving his wounded comrades a chance.

It was May 5, 2004. Fernandez, of the 21st Field Artillery, 1st Cavalry Division, was part of a three-vehicle patrol in the Saidiyah neighborhood of western Baghdad. Fernandez was a machine gunner in one of the Humvees.

The rear Humvee broke down. The men strapped it to Fernandez’s vehicle and began towing it to their base.

As they drove, an improvised explosive device detonated, blasting through the passenger side of the disabled Humvee and critically wounding the men still inside. Then, insurgents unleashed a barrage of small-arms fire from nearby rooftops.

“After the went off, I noticed their Humvee was taking fire,” Fernandez recounted, according to the ​Associated Press​. “That's when I started shooting back.”

Fernandez fired his M-249 machine gun at the insurgents as the patrol drove away from the ambush site.

The situation deteriorated rapidly. The strap connecting the disabled vehicle to Fernandez’s Humvee broke. The men in that vehicle were now sitting ducks.

Fernandez and his squad leader, Sgt. Timothy Buttz, left the protection of their vehicle and ran towards the disabled Humvee. Fernandez laid down suppressive fire while Buttz and others tended to the wounded men.

“There was a tremendous volume of fire coming at them,” said Capt. Thomas Pugsley, the battery commander in a 2004 interview.

Fernandez’s M-249 ran out of ammunition. So he reloaded and emptied it a second time. He was out of ammo.

The situation was dire. Fernandez knew the men needed to get out of there, but the insurgents were unyielding. He had to get more firepower to counteract their assault.

That’s when he noticed that the M-240B machine gun on the disabled Humvee was not being used. Fernandez grabbed the machine gun off its mount. The weapon had been damaged by the IED, and the protective hand guards were gone.

Undaunted, Fernandez ran back to his position, with the M-240B and its ammunition in hand. He resumed firing at the insurgents while Buttz and the others transferred the casualties into another vehicle.

Fernandez said in an interview with a KBTX reporter in College Station, Texas, that he acted out of instinct. “You can’t think about it,” he said. “You don’t have a lot of time to think about it. There’s people dying, and you’ve only got a few seconds to do what you need to do. Training just helps you get started.”

Fernandez blasted away with the M-240B for a full 10 minutes. Missing the hand guards, Fernandez’s hands were seriously burned, but he insists he didn’t think about it.

“With the adrenaline rushing, you really can’t feel nothing,” he said. “It’s just not really in your mind at the time.”

Ultimately, the casualties were brought to safety. Two Americans, Pfc. Bradley Kritzer and Spc. James Marshall, had been killed. Five others recovered from their injuries, thanks to the quick thinking and bravery of Fernandez and Buttz. “He bought those soldiers time,” Pugsley said.

For his actions on that day, Fernandez received the Silver Star, the third-highest award given for distinctive gallantry. Buttz received the Bronze Star Medal with Valor Device.

Fernandez dismisses the notion that he did anything out of the ordinary. “You live with these guys, you train with them, it’s the same guys every day,” he told a KGUN reporter in Tucson, Arizona. “They’re like best friends, they’re like your brothers. All you have is the guy next to you. So when one of them is wounded, or one of them is screaming, it really doesn’t matter about anything else.”

Fernandez’s parents are understandably proud of their son. “My mom tells me I have nothing to prove now, so if something happens again, to get down. But that’s kind of hard to do; it’s my job.”