UNSUNG HEROES: The Marine Who Shielded His Team From A Grenade And Then Kept Fighting

“Ambush Alley.” That was what they called this side street. It was nestled in the Sangin district of Afghanistan’s Helmand... 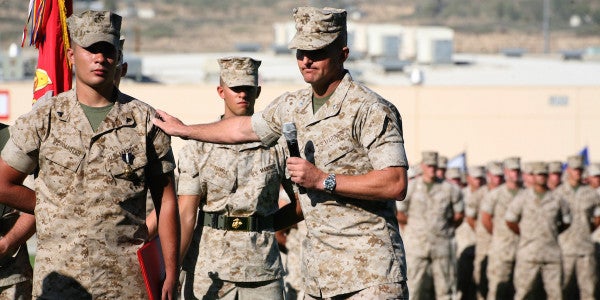 “Ambush Alley.” That was what they called this side street. It was nestled in the Sangin district of Afghanistan’s Helmand Province, a Taliban stronghold. The street was just 8 feet wide, with 10-foot brick walls lining either side.

It was where Pfc. Richard Weinmaster would prove his mettle.

Weinmaster and other members of the 2nd Battalion, 7th Marine Regiment were conducting a dismounted patrol through Ambush Alley on July 8, 2008, when they were attacked by Taliban fighters. Small arms fire rained down on the Americans. Weinmaster, who had been in Afghanistan just over two months, was leading the way with his machine gun. It was his first deployment.

Unfazed, Weinmaster fired back with his automatic weapon. His award citation states that he confronted a “withering volume of fire that passed within meters of his position.”

Then, insurgents lobbed two hand grenades over the wall. One landed near Weinmaster’s team leader, Lance Cpl. Travis Wilkerson, and three other Marines.

Cpl. Richard S. Weinmaster smiles as he is congratulated by a Marine after the ceremony where he was awarded the Navy Cross.Photo by Cpl. Zachary Nola

Weinmaster reacted immediately. First, he pushed Wilkerson away from the grenade. Then, astonishingly, Weinmaster jumped toward it, intending to put himself between the blast and his comrades.

The grenade exploded while Weinmaster was mid-air, according to an account by theWorld-Herald News Service. Shrapnel penetrated his head, legs, and abdomen. One piece went through his eye socket and into his brain.

Wilkerson, the team leader, was unscathed, as were other nearby Marines. Weinmaster had saved them from the grenade’s explosion.

Incredibly, rather than seeking treatment for his devastating injuries, Weinmaster resumed the fight. He took up his machine gun and fired at enemy forces just 50 yards away. Even in his weakened state, he was effective. His award citation credits him with “engaging enemy forces with accurate automatic weapons fire and forcing them to break contact.”

Before long, Weinmaster collapsed from his injuries. He was medically evacuated and it was unclear whether he would survive.

In the end, Weinmaster pulled through. Two pieces of shrapnel remain lodged in his brain.

For his actions on July 8, 2008, Weinmaster received the Navy Cross, the second-highest award given for distinctive valor. During the award ceremony, he also was promoted meritoriously to corporal.

Weinmaster deflects the praise to his teammates, crediting them with saving his life. “If it wasn't for my Marines, I wouldn't be here,” he reflected at a Marine Corps League meeting. “I’m walking. I'm talking. With that piece of shrapnel in my brain, I should be brain dead.”

Wilkerson, for his part, feels indebted to Weinmaster. “There is nothing I can do to repay that man,” he told The Desert Trail.

“I didn't do anything special,” Weinmaster insisted at his award ceremony. “Everyone on my left and right would have done the same thing. I was just in the right place at the right time.”