An Untold Story From The 75th Ranger Regiment

Editor’s Note: The following is an excerpt from a new book called Violence of Action: The Untold Stories of the... 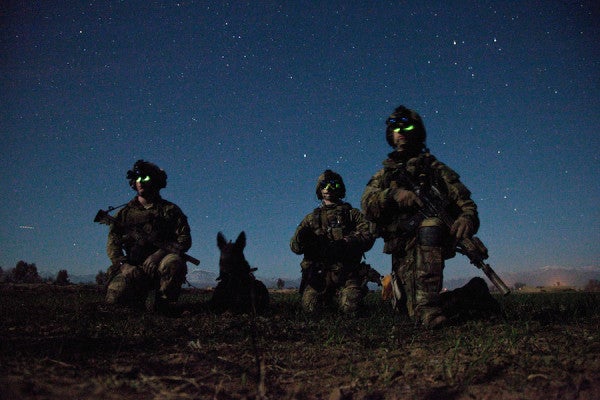 Editor’s Note: The following is an excerpt from a new book called Violence of Action: The Untold Stories of the 75th Ranger Regiment in the War on Terror, Marty Skovlund, Jr., LTC Charles Faint, and Leo Jenkins. The book was published this month by Blackside Concepts.

“On Top Of The Hill”

Sixteen hours in and the missiles were still coming in with a vengeance from the east. Perched atop the best vantage point in the valley, my head touched 10,000 feet and my lungs felt every inch of it. Most of us doubled over, some with exhaustion, some with mountain sickness, and practically everyone found the ground with their asses and their backs. When we started this mission, we were nocturnal creatures, sharpened by the darkness and the repetition, but now the backs of our necks and fists baked as the sun cut right through the thinning air. Had it not been for the artillery engulfing the valley below, we would have been completely out of our element.

To the south and west, our brothers fought and maneuvered around shanties of Taliban trainees. Their rounds cracked and whizzed over our heads and nearly demanded our concern, but we were too deep in this now, too near dehydration and exhaustion to waste precious energy putting a helmet back on and finding solid cover. Most of us had just finished working for this viewpoint and were enjoying our 1200 calories of processed astronaut food, the first we’d had in ten hours of sustained contact and miles of brutal terrain. Nothing short of a screaming mortar was moving these guys; we were digging in and recharging for another long night.

Nobody ever sees these days coming. I checked my watch and noted that typically my schedule dictated the next 90 minutes be spent in the gym, improving my fitness and my physique, and not on this goddamned hilltop almost two miles above sea level. This was too close to heaven for any Ranger to spend a day fighting. But here I was, next to the rest of them, rationing sips of water and squeezing chemically stabilized cheese directly into my mouth.

Last night was easy. There were only twenty-some odd fighters camping out in a cave that was probably as old as the Bible. We would drop some munitions, search the bodies, throw some chem-lights and call it a night. Head back for chow and sleep as long as the air-conditioning held up. But last night became today and twenty-some odd hours became a hundred. Last night, I didn’t need to save anything. Today, I couldn’t afford to.

I watched the commander, leaning against the most authoritative rock he could find, talking to the voices inside of his Peltors. Cleared to engage to phase line gold. Understood fuel bingo in fifteen mikes. Tracking all. When Newton stated that every action had an equal and opposite reaction, he clearly hadn’t anticipated the mind-bending speed at which war could travel. An obtuse flex of the thumb, air passing through vocal cords, reverberations captured in a microphone, invisible radio frequencies; these were the actions whose reaction would be a 500 pound bomb humming along a laser guided track onto a hut made of sticks and mud. Afghanistan: the only place on Mother Earth where mountains worthy of postcards and ski resorts see more HIMARS rockets than beer lodges.

I leaned my head back and allowed myself to consider how abysmal the enemy’s chances were of surviving the night. There were piles of dead bodies scattered throughout the valley and we were grumbling about the farmer’s tan we were getting. This was more of a janitorial effort than a fight. We would be pushing semi-automatic brooms and open-bolt mops until higher told us the place looked clean.

The time passed, albeit slowly, and eventually, the fellows from 3rd Platoon heaved and gasped their way to the peak, less exasperated by the ten or so Taliban they had just butchered than the climb up that damned hill. Finally afforded their chance to rest: they happily claimed their 1200 calories, and their asses found the hilltop beneath them. Now we were one big, happy perimeter of valiant gunman, satiated by the bloodshed and tearing at airtight packages of mechanically separated chicken patties. A few took naps, soothed by the melodic percussion of explosions and the softness of the dirt beneath them, while others nervously scanned the hillside for possible reinforcements. The reinforcements weren’t coming, but the night sure as hell was, creeping into the valley like the brackish water from the swamps of Fort Benning.

The hill was quiet and the mood solemn. It was becoming increasingly realistic that we were spending the coming nightfall in this valley. Nobody had slept, and nobody would. Not until this was over.

Suddenly, the platoon sergeants lumbered over with new orders, and the men of 1st Ranger Battalion steadily found their feet, undoubtedly swollen and sore. A few enemy stragglers were spotted running west, away from the valley, and the attack helicopters cut them down like stalks of Bermuda grass. The empty shells fell and echoed through the valley, conjuring the pitch and ring of church bells. It was a welcoming sound, but there was no church here. This land was not of God. This land was of the camouflaged juggernauts of the infantry. Afflicted by the miserable conditions, but in no way discouraged by the fighting, we shouldered our rifles and steadied our pace, preparing to spend the ensuing hours of darkness hunting, fixing, and finishing whatever was left in this valley to kill.