The Upgraded AC-130 Gunship Embraces The Old And The New

Amid the high-tech troubles of the F-35 program and the battle over the fate of the A-10 Warthog, an old... 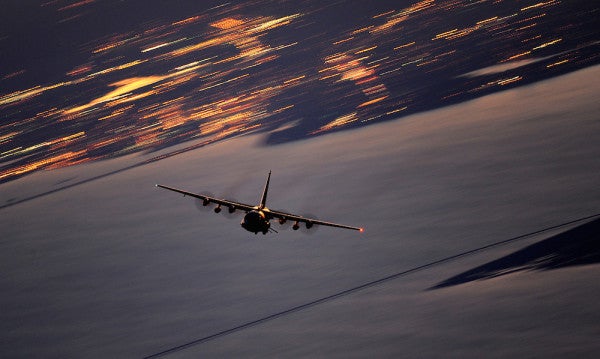 Amid the high-tech troubles of the F-35 program and the battle over the fate of the A-10 Warthog, an old Air Force workhorse is getting an upgrade by mixing proven weapons with new technology.

The AC-130 “Spectre” gunship, which made its combat debut during the Vietnam War, has a fearsome reputation. Often paired with special operations teams, AC-130s provide close air support from tight orbits high above the battlefield. The AC-130s have mounted a variety of armaments over the years, but the most well-known configuration is the AC-130U “Spooky” — the U is armed with a 25mm rotary cannon, a 40mm Bofors cannon, and a 105mm howitzer. The mounted artillery piece gives the AC-130 powerful and accurate firepower for a low cost. But newer versions of the legendary gunship — the AC-130J “Ghostrider” and the AC-130W “Stinger” — were slated to remove the howitzer for more advanced bombs and missiles and a single 30mm cannon.

However, those plans have changed. In remarks to reporters after a meeting at the National Defense Industry Association on Jan. 27, Air Force Lt. Gen. Bradley Heithold said that some AC-130Js will mount the 105mm howitzer after all. Heithold, who is the current head of Air Force Special Operations Command, outlined the plan to bring back the 105 on the new AC130Js: “About the third plane, we cut in the 105. Technology-wise, this is not a tough thing to do.” Indeed, AC-130Ws operating in Afghanistan have already been modified by crews to carry the 105mm. The howitzers are also relatively cheap, at about $400 per shell.

Gunships will also be getting some new equipment in addition to old standbys. The Air Force wants to improve the AC-130’s survivability; the design is essentially a cargo plane with weapons and sensors, after all. The Air Force is searching for a system capable of defeating radar-guided missile threats. But the most radical new technology the Air Force wants for AC-130s is a directed-energy weapon.

It’s a testament to the AC-130’s longevity and vital role that an airframe originally introduced in 1956 is slated to mount one of the first combat laser weapons. The continued improvement of the AC-130 sets the example for upgrading proven weapon systems with new technology, rather than pursuing costly high-tech programs at the expense of important capabilities.