The US Military Is A Friend To The Islamic Community

All too many people in the Middle East believe that America and its military are anti-Muslim. To make matters worse,... 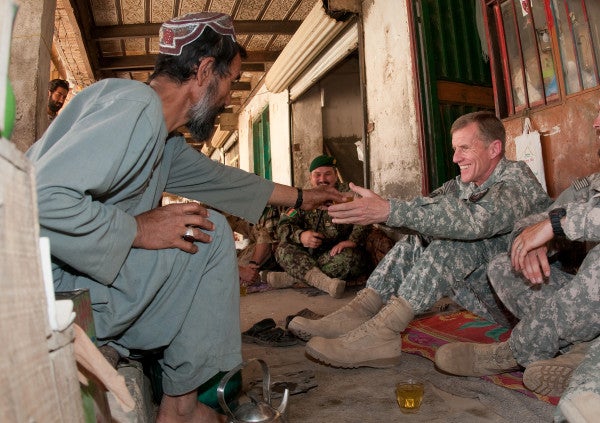 All too many people in the Middle East believe that America and its military are anti-Muslim. To make matters worse, terrorist organizations like ISIS feed on this storyline in their attempts to win over new recruits. This false narrative must be countered. The U.S. military is anything but anti-Muslim.

Aside from the fact that Muslims, along with the cadre of Muslim chaplains who support their spiritual needs, serve openly in the U.S. military, some of America’s greatest generals, including post-9/11 military titans, such as retired Gen. Stanley McChrystal, have expressed their respect for Islam.

More recently, in a meeting with allies in Kuwait, the special presidential envoy for the Global Coalition to Counter ISIS, retired Marine Corps Gen. John Allen, stressed that “as we seek to expose Da’esh’s [ISIS] true nature, we must also tell a positive story, one that highlights our respect – our profound respect for Islam’s proud traditions, its rich history, and celebration of scholarship and family and community.”

Aside from the plethora of facts and figures showing otherwise, the anti-Muslim narrative is inconsistent with my Army deployments, all of which arguably benefited Islamic communities.

My first deployment in 1999 was a peacekeeping tour to Bosnia. There we stopped genocide against Bosniak Muslims.

My second deployment in 2001 was to Kosovo. There, in defiance of Russia and a whole lot of Christians, we put an end to ethnic cleansing being perpetrated against Albanian Muslims.

My third deployment was to Iraq in 2004. There, when not patrolling and being blown up by terrorists masquerading as nationalists, we helped the Iraqi police, all Muslims, develop their capacity to defend their communities against extremists. They were our comrades. We broke bread with them. We patrolled with them. We shared the same risks as them.

My fourth deployment was to Afghanistan in 2007. Much of my tour was spent carrying out humanitarian projects that included missions to deliver food, clothing, and medical care to needy families during an exceptionally harsh winter. When working with Afghan security forces, we shared their reality and all the risks that entailed. I lost track of the number of times some of us set aside protocol and removed our body armor while under Afghan hospitality, or rode in their unarmored trucks during joint patrols.

Much of my Army deployments were spent defending Muslims against extremism in their midst. Many of my friends left body parts in Iraq or Afghanistan, in the defense of Muslim countries. Some never came home.

Many war veterans I know warmly recount stories about friendships they forged with tribal elders or religious leaders they interacted with in Iraq or Afghanistan. Likewise, the close bonds that troops developed with their combat translators is the stuff of legend. Translators down range are part of the team, same as everyone else. The extent to which veterans have advocated for their Muslim brothers-in-arms to receive immigration visas to the U.S. is well documented.

Beyond the military, America is the most welcoming place for Muslims. Muslims here can preach and practice any sort of Islam they prefer, from pious to casual, without fear of being ostracized or labeled as apostates. That is not the case in great swaths of the Middle East and South Asia where belonging to the wrong sect or being deemed “insufficiently Muslim” can get you killed.

America and its military are a welcoming place to all religions; it is the violent religious extremists killing in the name of “Islam” who are anti-Muslim.