The US Navy Is in Trouble, But Building More Ships Won’t Save It

President Donald Trump has called for the biggest expansion of the U.S. Navy since the Cold War. According to Trump,... 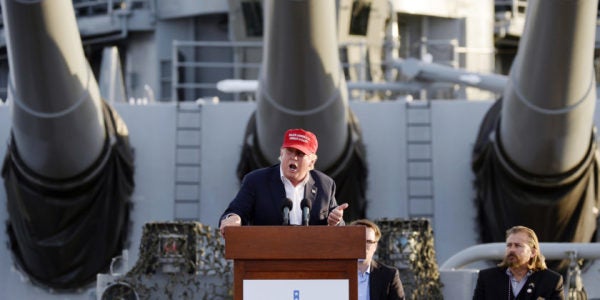 President Donald Trump has called for the biggest expansion of the U.S. Navy since the Cold War. According to Trump, America’s military — and its Navy specifically — is weak and in drastic need of revitalization.

“Our Navy is the smallest it's been since World War I,” he said during a speech on Oct. 21. “My plan will build the 350-ship Navy we need. This will be the largest effort at rebuilding our military since Ronald Reagan, and it will require a truly national effort.”

In fact, the U.S. has by far the most dominant military on the planet. And the Navy is the most powerful the world has ever seen.

Unfortunately, that doesn’t mean it’s not in trouble.

But the rot at the core of the U.S. Navy is of a variety that no amount of cash can cure. Over the past two decades, the American military in general, and especially the Navy, has experienced an unprecedented number of ethical failures. Flag officers fall to corruption scandals with frightening regularity and the 7th Fleet — the single most powerful naval force on the planet — is in the middle of a scandal that is unprecedented in scope.

To fix the Navy, we don’t need more ships. We need ethical reform.

Trump’s goal is to grow America’s already massive Navy from 282 ships to 350 ships in the next 30 years. Politicians of every political stripe have long been in favor of increasing the naval fleet, but the cost to the American taxpayer would be billions. To pay for the expansion, Washington will need to go deeper into debt or cut back spending elsewhere.

Meanwhile, the idea that our Navy is the weakest and smallest it’s been since World War I is misleading. It’s true America has fewer ships than it once did, but those ships are far bigger and more technologically advanced than the battle cruisers and destroyers that plied the seas 100 years ago. Even in terms of raw numbers, America outclasses the nearest competitors. It fields 10 aircraft carriers. The next closest country, India, has only two. The U.S. dominates the ocean.

To be clear, America does need to fund the Navy and build ships to replace aging vessels. Russia and China are rapidly growing their naval forces, and we have to keep up. But more ships won’t make a lick of difference if the sailors serving on them don’t know right from wrong.

An example: Over the past 25 years, Glenn Defense Marine Asia did business with the U.S. Navy throughout the Pacific. The contractor operated ports throughout the region and provided ship husbanding services to some of the biggest and most powerful ships at sea.

It all came crashing down in 2013 when the U.S. Justice Department arrested GDMA’s CEO Leonard Glenn Francis, better known as “Fat Leonard.” The Malaysian playboy had bilked the American taxpayer for years by overcharging for basic ship husbanding services in the Pacific. He maintained his criminal enterprise by buying off dozens of U.S. Navy personnel.

Related: The Cash, Bribery, And Prostitution Scandal That Continues To Haunt The Navy »

Francis enticed Navy officials with cash bribes, luxurious trips, hookers and in one case Lady Gaga tickets, all while reveling in his criminal lifestyle. The list of those indicted includes an NCIS officer, a captain and a rear admiral. Even Vice Admiral

anch lost his security clearance amid allegations of his involvement — not a great look for the Navy’s top intelligence officer.

Justice thinks that might just be the tip of the iceberg. Investigations into Francis’ bribery scheme are, after more than five years, still ongoing. In fact, the feds keep pushing back the playboy’s sentencing date so it has leverage over him to pursue more corruption cases against Navy officials.

The Fat Leonard case is the biggest ongoing Navy corruption scandal, but it’s hardly the only one. In 2015, officials relieved the captain of the USS Lake Erie of duty, citing a “poor command climate” aboard the ship. That same year, a cheating scandal rocked the Navy Surface Warfare Medical Institute. The Navy kicked out 31 sailors from the school, discharged 13 more and fired two leaders.

During the investigation into the cheating scandal, investigators revealed text messages between students who planned to corrupt as many fellow classmates as possible. “If all dirty, no one will snitch,” one text read.

The U.S. Navy is a Bermuda Triangle of integrity, where sailors’ moral scruples mysteriously vanish without a trace. The Pentagon spends too little time teaching ethics and morality to its Naval officers. To keep scandals at bay and keep the Navy strong, this has to change.

“There’s a rigorous ethics curriculum that’s part of the U.S. Naval Academy and West Point,” Pauline Kaurin, professor of philosophy at Pacific Lutheran University and a military ethics expert, told Task & Purpose. “There’s also segments of training in the officer candidate school, but the focus tends to be on leadership and personal morality.” What’s needed, she said, is a greater focus on objective ethics and the Navy’s core values.

Kaurin literally wrote the book on military ethics and she sees these problems as indicative of a culture of of personal virtue that puts the focus on the individual during training but fails to follow up later on.

“All the Military branches have core values, and once that training is complete there’s an idea that you’re in charge of your own ethical development,” she explained. “The idea is that you should focus on developing your own core values and that those should match up, somehow, with the Navy’s core values.

“There isn’t a lot of discussion about ethics,” she added. “And there’s a distinction there. Ethics is reflecting upon what your moral commitments are, where they came from and how they’re reflected in your community. So there’s an critical element to ethics. The problem is that the Navy understands ethics in terms of personal morality.”

Kaurin explained that the high-level leadership at the Navy tends to use this focus on the individual as a tool to distance itself from offenders during ethical scandals. “They’ll say it’s just one bad apple or they’ll say own personal moral choices led to this. There’s rarely a discussion about the greater ethical and moral environment.”

That conversation is critical. Officers don’t become corrupt in a vacuum. “We are what we repeatedly do,” Kaurin said, quoting Aristotle. “Excellence is not an act but a habit. The odds are that this behavior is just the tip of the iceberg. We have to look at the culture in the Navy and ask the question, ‘How did this person get to this position while being so deeply morally flawed?’”

Kaurin said real progress will only come with a systemic approach. “The culture in the Military tends to disproportionately put the focus on leaders and it assumes that if someone achieves a certain position, the morality will come with it,” she explained. “History proves that’s not the case.”

She’s right. A focus only on individual morality lends itself to corruption, because psychology shows us that even deeply held personal values are more flexible than people think and heavily dependent on the circumstances in which we find ourselves. Moreover, virtues often come into conflict — for instance, our sense of loyalty to peers can overcome our adherence to rules, leading us to protect a friend rather than expose malfeasance. When the culture is rotten, very few individuals can maintain their own moral compass. And the problem may be compounded in the Navy due to the physical isolation in which sailors often find themselves and an institutional focus on strong leaders.

“It’s hard to go outside the chain of command because of your physical location,” Kaurin said. “So having these isolated ships, carriers and submarines where the captain is in charge and everyone is physically isolated has led to a certain kind of culture within the Navy. That has contributed to the culture of corruption.”

America’s Navy is strong, but it’s commitment to teaching ethics beyond personal morality is terrible. When the focus is on the individual sailor, with no follow-up and no reflection, the sailor is free to shape their morality to fit the culture in which they find themselves — often to the detriment of the Navy’s core values.