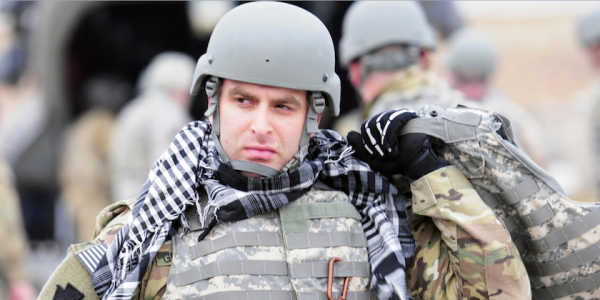 A video of a veteran with a prosthetic leg carrying an American flag and a woman across the finish line during Monday’s Boston Marathon has gone viral, racking up more than 5 million views in the past 24 hours. Of course, the story behind the story is even more incredible.

The veteran is retired Army Staff Sgt. Earl Granville, who lost part of his leg when a roadside bomb struck his vehicle in eastern Afghanistan in 2008. The blast also killed two of his comrades, according to Granville’s bio on the website for Unstoppable Heroes, a nonprofit that helps veterans wounded in combat adjust back to civilian life.

Granville was on his third deployment with the Pennsylvania National Guard’s 1/109th Infantry Regiment when he was injured.

In 2012, an Army reporter profiled Granville while he was visiting Afghanistan as part of Operation Proper Exit, a foundation that organizes trips for injured service members who want to return to the war zones where they were wounded, so they can check on battlefield progress and share their stories with the troops deployed there.

During the visit, Granville spoke to a group of soldiers stationed in Kandahar City. He told them about his brother, Joseph, who took his own life in 2010. Joseph had also been a staff sergeant in the Army. In fact, the two brothers had attended basic training and deployed twice together. But Joseph wasn’t on the deployment that cost Granville his leg.

“This time I cut the cord and went by myself,” he said. “Of everyone in my family, my twin brother took it pretty hard. After I got hurt, he was told he couldn’t go to Iraq on a deployment he already had orders for. They sent his wife instead, and it was just a downward spiral from there.”

The woman Granville carried across the finish line was his guide, according to a local Fox News affiliate. Marathon participants with disabilities are allowed to be accompanied by people who can assist them if needed. Granville has also completed multiple marathons using a handbike.

Following the marathon, Granville posted a link to the video on his public Facebook page, which is followed by more than 20,000 people. The accompanying caption read: “So, apparently I did something today. Thank you everybody for your support. I’ll post more during this week…but until then, once again, thanks for all the encouragement. I’m so very grateful.”