Not being able to maneuver properly or fire your rifle in combat has deadly consequences; a little duct tape or … Continued 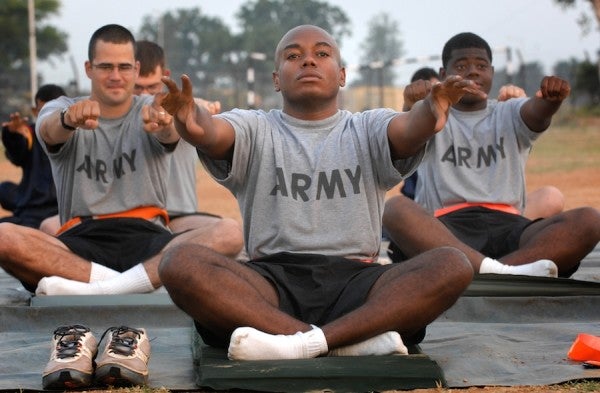 Not being able to maneuver properly or fire your rifle in combat has deadly consequences; a little duct tape or parachute cord might seem stupid, but ask any soldier, Marine, airman, or sailor and he or she will confirm that these two little things can work miracles, and have been known to save lives.

When it comes to how service members deal with their physical and mental recoveries after multiple deployments, they tend to be pretty efficient as well. Often doctors only prescribe medication to treat physical and mental injuries, but a cocktail of pills on its own does not work, and can actually induce more harm than good in the long run. Veterans are beginning to experience this firsthand and are consequently taking matters into their own hands by personalizing their care to their specific needs. One of the ways service members are treating their chronic pain (caused by heavy gear and multiple deployments) and post-traumatic stress (caused by over a decade of violent war), is by learning to practice the ancient health practice of yoga.

Post-traumatic stress and injury are not unique to military members — they affect all kinds of people all over the world: survivors of rape and natural disasters, paramedics, cops, or anyone for that matter who has dealt experienced trauma in their life. It is thought that over 5.2 million Americans have post-traumatic stress in any given year. Everyone deals with tragedy and violence in different ways; a Navy Seal with multiple combat deployments might never experience post-traumatic stress symptoms, but an Army medic or combat engineer might suffer greatly.

Related: How long does it actually take to get out of shape?

Until very recently, yoga was seen as too “unconventional” and not useful by the military community. But 10 years is a long time for an all-volunteer force to sustain combat, and many veterans and active-duty service members are now quickly finding their way to this ancient practice. In fact, yoga has caught on so much among our nation’s military community that there are now many centers that cater specifically to wounded veterans and several that are actually run by veterans themselves. For the most part, the old stereotypes that yoga is only for the New Age crowd, or that it doesn’t really work, are beliefs of the past. Yoga works, and more and more, veterans and active-duty service members are learning how to practice it every day.

In a Huffington Post article, 27-year-old former Marine Sgt. Senio Martz talked about his journey overcoming post-traumatic stress through yoga. Martz was injured from a roadside bomb while on a foot patrol in Southern Afghanistan. While he survived, the entire nine-man squad under his leadership was killed or wounded. The blast left him with severe post-traumatic stress, carrying incredible burdens of guilt and shame.

“It's a feeling of regret — failure — that really affects me now. I didn't see the signs that could have alerted me to warn them to get away. I go on living where their lives have ended,” Martz explained in the article. “I gotta push myself to try some of these techniques. But last night after yoga, I had a good sleep. That's a place I haven't been in a long, long time.”

In 2012, the American Journal of Occupational Therapy published a research study that confirmed the positive effects of yoga in aiding combat veterans and deployed military personnel in dealing with combat stress and even post-traumatic stress. According to the report, “Sensory-enhanced hatha yoga was effective in reducing state and trait anxiety, despite normal pretest scores.” Participants showed significantly more improvement on 16 of 18 mental health and quality-of-life factors than control participants.

Yoga Warrior classes can help “unfreeze” bad memories or gently unlock rigidly held memories in ways that normal talk therapy might not … classes allow participants to safely release and express stored emotions such as guilt, shame, anger, sadness and grief so they can better understand, make peace with, and manage those feelings. … the mind is allowed to safely associate the body with pleasant sensations, which is important for traumatized individuals who associate their bodies with unpleasant sensations due to war wounds, rape, etc.

In the early stages of care medication can be, and is often, very helpful for service members suffering from chronic pain and post-traumatic stress symptoms; it can often get someone over the “hump” so to speak, or through the worst of it. However, a pill is never a cure-all. To really heal and navigate the rest of life productively, veterans are pursuing a more comprehensive approach. Alternative practices like yoga, are no longer seen as “alternative” within the veteran and military community. They are seen as efficient, most definitely not stupid, and as something that really works.

Surviving war, combat, rape, or any horrific tragedy, is not a misfortune. It does not define us, and it does not make us worse, marked, damaged, or forever excluded. Living through horrifying experiences produces evolved humans; humans who have journeyed to the other side and have gazed upon the darkest elements of humanity. These changed Americans among us truly comprehend the horrific consequences of war, rape, and extreme violence. If a simple exercise such as yoga is useful to their healing and overall quality of life, then we as a nation, as a military, must champion it.