This Vietnam Vet Lived Life Without Family, But He Wasn’t Alone At His Funeral

Raymond Thompson was buried Thursday in Beaufort National Cemetery. His remains came from Charleston. He served as a U.S. Navy... 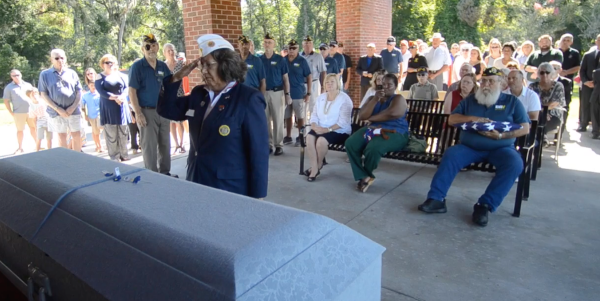 His remains came from Charleston. He served as a U.S. Navy seaman during the Vietnam War. There were no friends and family to represent him at his funeral.

That is all that is known about the man described as an indigent veteran.

But that was enough for more than 150 people to attend a ceremony at the cemetery honoring Thompson for his service after word spread this week.

“We are his family,” cemetery representative Louis Brown said as he spoke to the crowd in front of Thompson’s flag-draped casket. “And it’s evident by everyone here today.”

Cemetery director Sonny Peppers learned Tuesday that Thompson would be buried behind the gates on Boundary Street and had no one to represent him. He reached out to the local chapter of Disabled American Veterans.

An email was circulated, and chapter treasurer Ron Voegeli put out a call on Facebook for the community to turn out.

The message spread quickly. The crowd was the largest Voegeli said he had seen for a Beaufort National Cemetery ceremony, and the veterans organization has supported similar ceremonies for three decades.

A bugler blew “Taps” at the shelter in the rear of the cemetery grounds.

A U.S. Navy ceremonial guard from Naval Hospital Beaufort folded the flag and presented it to Disabled American veterans officer James Johnston. The flag will be returned to the cemetery and used in future events, Johnston said.

John Williams, a retired Marine, delivered the committal. He prayed that whatever discomfort Thompson experienced at the end of his life had been replaced with happiness and led the crowd in reciting Psalm 23.

Vietnam veteran Paul Fisher walked through the cemetery before the ceremony, following the procession. The Ohio native had gone through boot camp at Marine Corps Recruit Depot Parris Island during the 1960s and swore he would never return to the land of bugs and sand.

But he came back three years ago, and attended the ceremony Thursday after receiving an email.

“It’s one of those things,” he said. “Everybody should be recognized.”