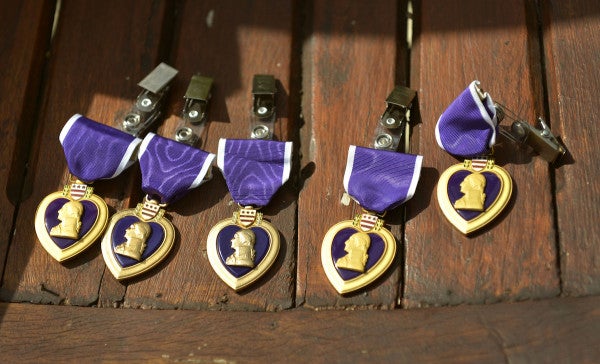 EDITOR'S NOTE: The Times Free Press in November 2016 published a story that included information about Vietnam veteran Stephen D. Holloway, who was speaking at a Veterans Day event in Pikeville, Tennessee, and claimed to be the most-decorated veteran of the Vietnam War. Holloway's public claims were challenged by veterans of Vietnam and other conflicts, and the Times Free Press has spent more than a year investigating his military record. To date, Holloway maintains his claims are accurate, though few of his medals and awards have convincing documentation. This is part 1 of a two-day series.

Prisoner of war in Vietnam.

For three of those claims, the Hixson resident's DD-214 — the official document every military veteran who serves is given when discharged from duty — backs it up.

One of Holloway's multiple DD-214s, anyway.

If Holloway's Purple Heart claims are true, veterans who study military awards, documents and records say, he would be the most decorated service member to serve in the Vietnam War.

But so far, the Times Free Press has been unable to verify any of those claims through military channels, or through Holloway himself.

On Nov. 10, 2016, the Times Free Press interviewed Holloway by telephone before he spoke at dedication ceremonies for the new Veterans Park in Pikeville, Tennessee.

Holloway said he had spent that morning talking with students at a Bledsoe County elementary school about the upcoming Veterans Day and his military service.

In the first interview, the Nebraska native said he was “Airborne Special Forces, U.S. Army 101st Airborne,” reaching the rank of major, and later was a prisoner of war, captured by the Viet Cong.

That was how Holloway was introduced at the dedication, where he also claimed to be a “DMZ tunnel rat.” Holloway said nothing in his short speech about his Purple Hearts or other medals, but he praised fellow veterans for their sacrifices and thanked those who turned out.

But in an interview the previous day, Holloway said he also worked for an agency “that you cannot talk about.”

He also claimed he earned more than 50 medals in all, including a second Silver Star, three Army Commendation Medals, three presidential citations and scores of others.

“I've got 57 medals,” Holloway proudly proclaimed, remarking that some were pinned to his chest by President Lyndon B. Johnson himself.

“And I hated President Johnson,” Holloway said. “Johnson was the one who gave me these. He pokes you every time he puts them on.”

But not all of those 50-plus medals were listed in a DD-214 and other documents obtained by the Times Free Press from the National Personnel Records Center, part of the National Archive.

Holloway's claim of earning nine Purple Hearts is far too impressive to overlook, but also too easy to believe for anyone not familiar with military jargon or how rare it is for anyone to earn such multiple medals. To receive a Purple Heart, one must be wounded or killed in battle.

The day the story ran, and for days afterward, more than a dozen veterans from the Chattanooga area and across the nation challenged Holloway's claims. Holloway and a family member asked the Times Free Press for a retraction of the portion of the story claiming he was a POW. An audio recording of Holloway's interview contains several minutes of Holloway describing details of his “torture” at the hands of “a couple of slant-eyed-looking people,” his weight loss, and eight fellow captives. Holloway, however, accused the newspaper of “making it up.”

The official documents draw as much scrutiny from veterans as Holloway's claims.

A primary release paper, the DD-214, is given to all military service members when they are discharged. Holloway has two DD-214s filed in the National Archive for his first enlistment. They're identical, except one lists the Purple Heart awards and the other does not.

Holloway has at least those two, and possibly as many as four, DD-214s on file with the National Personnel Records Center that bear the same dates and other similar details of his record but with a startling difference.

One of the National Archive copies and a matching copy provided to the Times Free Press by a family member state Holloway received a National Defense Service Medal, Vietnam Service Medal and Vietnam Campaign Medal, and that's it.

But Holloway says, and another DD-214 filed with the National Archive states, he also earned those nine Purple Hearts, the Bronze and Silver stars and an Army Commendation Medal for valor. Holloway has verbally claimed far more medals than those.

Both DD-214s for his first enlistment say Holloway worked as a supply clerk and was involved in managing traffic but don't describe a combat position.

There is at least one more DD-214 for Holloway's second tour of duty — he signed up for a four-year stint but was discharged after a year — but those military records were apparently part of a records requested by another government agency and have been unavailable for months.

U.S. Army Chief of Staff Gen. Raymond T. Odierno shakes the hand of a Soldier after presenting him with the Purple Heart medal during a ceremony at Forward Operation Base Zangabad, Afghanistan Sept. 18, 2012.U.S. Army/Staff Sgt. Teddy Wade

The paperwork from the National Archives held copies of “2-1” jackets, manila document holders with an index listing some of the awards in handwritten and typewritten entries. Those entries match wording on the DD-214 that Kendrick points out. But, although the 2-1 includes all nine Purple Hearts, the box for listing “wounds” is empty, despite Holloway's claims of being wounded in combat nine times.

The Times Free Press recently submitted a follow-up request in an attempt to gather remaining records.

A fake Purple Heart claim flies in the face of the people who have legitimately received them.

And Kendrick doesn't mind being asked for proof of his awards. He said most veterans don't.

Holloway initially offered to provide a copy of his DD-214, but he never produced it after repeated requests.

When Holloway was contacted in mid-June and again in October and November seeking documentation of his Purple Hearts citations and other awards, he didn't offer proof. He offered excuses.

“I'd have to look,” Holloway started. “I I threw when I came back from 'Nam, I threw everything away, so I've got a few things and I'll have to.”

After being told that Kendrick and others believe he faked the DD-214 bearing the long list of awards, Holloway dodged.

He said he was going out of town said he would call when he got back, but he never called.

In October, he again said he'd thrown everything away, adding that he was being treated for cancer.

In November, as another Veterans Day passed, Holloway still had not proved his claims. He said he was being treated for prostate cancer, was in line for knee replacement surgery, had kidney failure and bleeding behind his eyes and now was going blind.

Did he maintain his claim to the nine Purple Hearts?

“Yes, just leave me alone and let me get this stuff done and I will do it for you,” Holloway said on Nov. 14.

The Times Free Press extended an ongoing offer to seek the documentation with Holloway's permission, but he declined again.

Asked if he was lying about his record, Holloway bristled, “No, and I'm getting tired of talking to you about it, actually.”

On Nov. 28, Holloway didn't answer his phone or return the call after a message was left.

News that the 2016 Veterans Day event keynote speaker was being challenged on his military record left the veterans in Pikeville almost at a loss for words.

Ray Evans and John Hargis, two former members of the Bledsoe County Veterans Park board of directors and U.S. military veterans themselves, said they believed Holloway when he told them about his military record. Holloway produced an award-laden DD-214 to prove his claims, they said.

Hargis was shocked, especially since he'd seen the DD-214 and believed Holloway's verbal claims of being a “DMZ tunnel rat” and a prisoner of war. He said he believed Holloway and didn't question the document he showed them.

“I thought he was telling the truth,” he said. “I accepted him at his word.”