In New Zealand, the Maori people have an ancestral war cry with a dance called “haka” that was originally performed … Continued 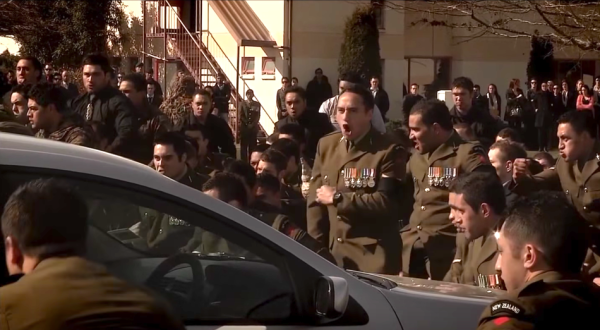 In New Zealand, the Maori people have an ancestral war cry with a dance called “haka” that was originally performed by warriors before a battle. A show of strength and battle prowess, it was used as a form of intimidation against the enemy. Traditionally, the dance is performed by a group and involves foot stomping with rhythmic shouting.

These days, it’s often performed at special events, such as weddings, funerals, and rugby games.

In August 2012, nearly 200 infantry soldiers gathered around a funeral procession to perform the ancestral war cry in Christchurch, New Zealand.

Related: A Veteran Of The Iraq War Reflects On His Fallen Comrades »

The somber dance was meant to honor Cpl. Luke Tamatea, Lance Cpl. Jacinda Baker, and Pvt. Richard Harris, who were killed by roadside bomb in Afghanistan.

Major John Gordon, a spokesman for the New Zealand army, told The Daily Mail that the haka tribute illustrated the men's “outpouring of emotion.”

Watch the incredible performance of the haka dance here.