An Air Force explosive ordnance disposal technician explains what it takes to do one of the military's toughest, and most dangerous jobs. 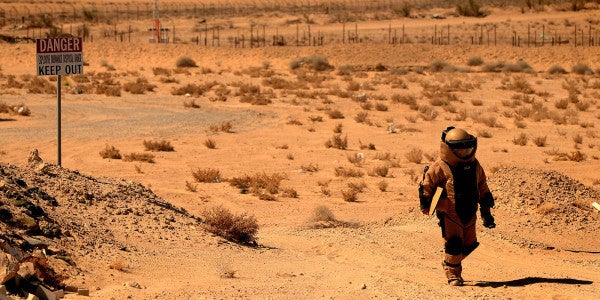 The pilots who fly the Air Force's fighters and bombers, the crew members who keep them in the air, and the controllers who guide them are all focused on getting ordnance to targets. The Air Force's explosive ordnance disposal technicians, however, are part of a small cadre whose job is to find and eliminate ordnance on battlefields or at home.

After working as a technician gathering blood to treat wounded troops, Master Sgt. Linn Dillard retrained for EOD at Florida's Eglin Air Force Base in 2009, becoming one of just three of 25 students in her class to pass the course.

During her Air Force career, Dillard has overcome a traumatic brain injury suffered when an improvised explosive device detonated under her armored vehicle in Afghanistan, survived Stage-3 breast cancer, and won medals at the 2017 and 2018 Defense Department Warrior Games.

On Friday, after a discussion about resilience and recovery from mental and physical strain at the Air Force's AFCON 2019 in New York City, Dillard, now an EOD equipment program manager, told Business Insider about the skills required to dispose of ordnance and the strain it puts on the select few airmen who do it.

The interview below has been edited for clarity and length.

Business Insider: You retrained for explosive ordnance disposal in 2009. Can you describe what that training's like? Why do so many people fail to get through?

Master Sgt. Linn Dillard: “It's seven to nine months long … and you have a test probably every three days, and it's a delicate combination between using your brain and the hands-on stuff. So some of it's just a written test. You have to know all of the ordnance, all of the safeties. 'Is this one initiated by time or pressure or whatever external factors? What's the filler? Is it chemical? Is it high explosive?' But then you actually have to get out there and perform the and disposal procedures. There's a lot of steps. When you mess one up, you die.”

“So it's tough intentionally, because not everyone is meant to pass, because you'll hurt yourself or you'll hurt someone else, and so every three days they put you to the test, and it's just exhausting, for seven to nine months straight. You're ready for a vacation like four or five months in, and you can't take one. You've just got to keep going, and so people kind of fall out for different reasons, and that's OK, because not everyone is meant for it.”

“I'm honored to be able to serve in that capacity and do what I do and support the fight from that way. And in the end … I do feel like that I do help people prevent needing all that blood, and that was my original intent.”

BI: When you're out in the field, in a combat situation, and you identify a suspicious object, what's the procedure for dealing with that?

Dillard: “So sometimes we see it; sometimes other people call it in. The first thing you want to do is get out of the way, so they'll cordon it and keep a safe area, try to look it as far away as possible, see if you can identify any factors that key you into what it is and how it works, and then based on that you approach it and you could do some diagnostic techniques.”

“We use X-rays. We use robots, so that we aren't right up on it in case it does go off, and some of them are tricky. It looks like it's one thing, but really it operates another way, and it's hard to stay a step ahead of the bomb-makers, but we do our best and we try to do it as safely as we can, and remotely is one of those ways. So we do a lot of training with the robots, and we try to use our diagnostic capabilities so that before we're actually touching the item and messing with it, we understand how it works and we're not going to set it off.”

“We use different cutting techniques, different explosive charges, different explosive tools. We use water. You'd be surprised how powerful water can be to disrupt something, so that it breaks it apart before it can get set off, and then that's the intent. You can collect the evidence, get fingerprints. You can get a lot of information doing a post-blast analysis after the fact and find the guys that make it so that they can stop putting them in the ground.”

BI: Outside of combat, in what other kind of scenarios do you apply these skills?

Dillard: “We do a lot of civil support. We do presidential support, so we work with the Secret Service whenever POTUS is flying around, but even just in my county — I'm stationed down in Florida, and there isn't a bomb squad for the city, and so they'll call the military and we'll go out.”

“Sometimes it's like grandpa's basement, and they find all sorts of remnants of war, grenades or whatever from World War II. And sometimes it's just rained so much that they find ordnance on like an old Army bombing range that now has a subdivision on it. You never know; someone's just got a rocket in their backyard. So we do stateside — that's kind of slower, but … we train, train, train, because you don't know what's around the corner.”

“And certainly our wars of the past are not what we're looking at in the future, and so we're always trying to stay ahead of the curve, ahead of the intelligence and training so that we're ready to go when it ramps back up.”

BI: How is Air Force EOD distinct from Army EOD or Marine Corps EOD or something like that?

Dillard: “So the Army EOD, they're Army. They're with their brothers in arms, and they're ground troops. They're riflemen first — and the Marines — but they're attached to each other. There's no Air Force unit for us to attach to, so we attach to the Army and the Marines, and so that is certainly different.”

“When I was attached to the Marines I never felt out of place. I felt like they would protect me to the end of the earth and I loved my time with … when you come home, it's a little bit different, because everyone else in the Air Force is dropping bombs remotely, as the pilots do, or doing a lots support function.”

“There are a few other career fields, like and that are actually on the ground doing a lot of the stuff, but it's a little different for us in in the Air Force, and when we're in, I love working with our joint partners, but we try to take care of each other when we get back to the states.”

BI: You mentioned on the panel it's a very mentally and physically challenging job. Can you elaborate on the specific kinds of strain you feel?

Dillard: “So physically, the bomb suit that we wear is 80 pounds, and so that in itself is a lot. When we go outside the wire, we carry a backpack; all of our explosives, our food, our water, our ammunition, anything we might possibly need. So you're 60 to 100 pounds on your back, and so we have to be physically fit.”

“We're just now getting a new physical fitness test, and so we're doing pull ups and we're rowing and this thing called a gruester … you have to have a strong back, strong legs, because if you're out walking 5 to the problem, you still have to have some energy to take care of it and walk back, and you can't do that if you're sitting on the couch five days a week. You really gotta keep up on your physical fitness.”

“The mental portion is just having that library of information and knowing what the safeties are and trying to stay one step ahead of whoever's putting the bombs in the ground over there.”

BI: When you get home, when you're trying to cope with and recover from the strain, what resources does the Air Force have for you?

Dillard: “Always there's the clinical aspect, the mental-health aspect, and we are breaking barriers so that people are more inclined to go to them, but there is still a stigma where some people are reluctant to go, and that was me. I didn't go until they forced me after I got cancer. I went through the Wounded Warrior program.”

“And then the social aspect … where sometimes you really just need to lean on your friends, and you aren't an Army of one. You are not alone. You just have to be that first person to open up and say, 'Hey, I'm struggling.' And you will find other people say, 'You know what, I feel the exact same way.' So there are resources in just the brotherhood of the military. There's resources at the medical clinic, and then in extreme cases, there's resources like the Wounded Warrior program.”